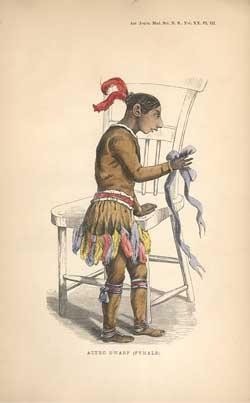 A dwarf’s life in the courts of Europe during the Dark Ages and on into the Renaissance was probably one of misery. Within the courts they were cast as jesters and fools. They were little people although cute but also to be persecuted because of their size. Outside the court they were associated with wood lore and forest activities. We have the Brother Grimm to thank for Snow White and the Seven Dwarfs. Even today Tolkin gives us his rendition with-in his Middle Earth epic fables.

The Aztecs also had some Little People and their place in the Aztec Mythology is much different than what you get from Europe.

One particular story starts out with a very old woman who was quite lonely and she very rarely left her little shack. One day out of grief and loneliness she took an egg and carefully wrapped it in a cotton cloth and sat it near her fireplace in a corner of her hovel. She would check it every morning and occasionally change the cotton cloth to keep everything clean. She would always remember to use only the softest cloth and was very careful with her egg. One morning when she opened the cloth to change it and check the egg, she found nothing but a few broken bits of egg shell. In the middle of the broken egg shell was a tiny little creature standing there with its arms held out to her. She just couldn’t believe her fortune in having the little being. She picked it up and gave it a great hug and a nurse. Every day for a year she loved and cared for the little being and was very careful to teach it all she could.

During that year it grew into a little man and could walk and talk and do anything any other man could do. The only problem with him was that he had stopped growing and remained very small. A mother’s love has no bounds and she wanted greatness for her son. Toward that end she called him over one day and told him to go out and find the local king and challenge him to a dual of strength so that he might prove his worth.

Now the kid had more upstairs than his mother and begged not to go but his mother was steadfast. It is known in Mexico that you don’t argue with the lady of the house and in Aztec times that went double. So off he 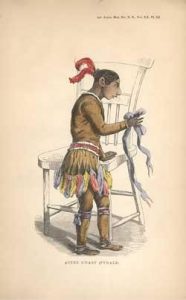 went to whatever fate had in store for him. When he was placed in front of the local king he laid out his challenge of strength to the monarch. His Majesty just smiled and told the little man that he needed to be able to lift a rock weighing at least three arobes (that’s 75 lbs for you un initiated types).

At this the boy ran back to his mother crying about what the king wanted him to do. She sent him back saying that if the king can lift it so can you. Back at the palace the king was a little miffed but holding true to his kinghood he lifted the rock as did the dwarf – er, little man. So the king devised another test of strength to which the little guy did just as well as he king. Then and other test was run and yet still another and another.

It seemed that whatever the king could do the little guy could do too. Finally, so as not to be out done and lose face to his public the king told the little guy that he had to build the finest castle in the land or forfeit his life. At this the youngster fled back to him mother the old lady and told her his tale.

As the story goes the old lady didn’t even bat an eye but suggested that they sleep on it which they did. When they woke up in the morning they found themselves in the very castle the kid was supposed to build. As it turned out they weren’t the only two people who were impressed.
When the king saw it he was amazed at what he saw and a little angered him. So he sent the little guy out to gather two bundles of cogoiol (a jungle grown very hardwood). He then explained to the little guy that he was to allow the sovereign to beat him over the head with one stick after the other and the king would allow the little person to do the same to him.

At this news the little man quickly ran back to his mother, the old lady and told her of the king’s proposal. He also added that the king was no slouch and would probably beat his brains out. Well mom just laughed it off and sat a freshly made tortilla on his head telling that it would protect him. She then sent him back with the tortilla and the two bungles of clubs to see the king.

The king being the king got first crack at the little person and proceeded to break each and every branch over his adversary’s head. The tortilla held firm and the dwarf wasn’t hurt in the least. The monarch didn’t want to let his opponent hit him but word had gotten out around the court and he just couldn’t allow himself to lose face so he allowed this skinny, little, puny, shrunken, tiny man have his turn. The second blow with the first stick did the trick. The monarch ‘s head was split into tiny little pieces. All the king’s men and all the king’s other animals (they didn’t have horses in those days) couldn’t put him back together again and they elected the dwarf as their new king and leader. Right after that the old woman disappeared.

She was found later sitting near a small river under a beautiful tree next to the sun light petting a large snake. She sold small amounts of water although not for money. She did it for the children to keep the snake fed. Apparently the snake had a thing for innocent babies. To bring this story into a proper Mythological meaning one can liken it to Shakespeare’s second or deeper meaning to his sonnets. The old lady is the RainGoddess and the dwarf is the man of the Sun who comes out of the cosmic egg.