By Suzanne A. Marshall from the October 2012 Edition 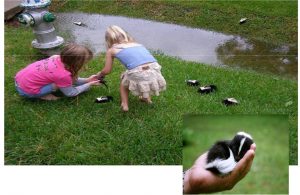 I recall on a few occasions when we were taking evening walks in Manzanillo along the boulevard or down the beach, a distant familiar odor wafting on the evening breeze. I wish I could say it was the scent of hibiscus or bougainvillea blossoms or even street vendors preparing savory Mexican food. But no, once a person has been exposed to the deadliness and much dreaded skunk defense, a mere whiff of the most foul scent on the planet will stop you dead in your tracks and have you peering pointedly in all directions for the unmistakable black and white creature. Apparently, the little stinkers can shoot like a double-barreled shotgun as far as 10 feet from two scent glands located in the anal tract. But I would bet money on the fact that once in the air the smell will carry for miles, which was where I hoped these ones were, miles away thus avoiding the necessity of a significant detour on our walking journey.

I really love the differences that are apparent in the Mexican tropics; the unusual birds, trees, flowers and terrain that are so interesting and lovely to see. But to my disappointment it hasn’t stopped a few unwanted critters from making their homes and habitats all the way up and down the North American coasts as far north as Canada. Skunks are even worse than mosquitos in my opinion, because you can’t put on repellent and forget about it. No, skunks being the foraging breed that they are can live in the wild but just as likely in towns and populated areas feeding on insects, rodents, garbage, fruit etc.. To make it even easier for them, they are quite content to live in hollow logs, abandoned buildings, vacant animal burrows, under decks or the steps of your home!

Many of you will know what I’m talking about. If you have driven highways over the years you have no doubt passed through a ‘cloud’ of skunky scent left in the air by some poor soul who has probably hit one crossing the highway. The stench would bring tears to their eyes for sure and no amount of tomato juice wash would rid the smell that will linger for weeks. Ever had a pet dog come home after chasing a skunk? I rest my case.

Now back home in Canada this spring having just returned from Manzanillo, it isn’t uncommon to see the neighbor’s cats snooping through our yard and I happen to like cats anyway, though travel has ended our days as pet owners. So I really don’t pay too much attention. After all this is one of the nice things about living in a small lake resort town where children and animals have a lot of freedom, just as I remember growing up as a young girl. And I should mention now that skunks are pretty abundant too though you rarely see them. You just know they’re in the area from that familiar odor on the wind.

Late one evening in May we are up on the second floor of our home getting ready for bed and we hear a horrific shrieking and howling of cats outside our home and obviously in our yard given the incredible volume of the noise. I thought either some dog had clamped his jaws around a cat or some other vicious attack was taking place. It took no longer than 10 seconds to figure out that one of the cats had either chased, startled or stumbled upon a skunk at the side of our house. In our yard!! The sudden attack to the olfactory senses upstairs in our room was so potent I was nauseated and my eyes were tearing up. With all the windows closed for the night I couldn’t at first figure out how this gawd-awful smell had invaded the entire house!

Well I figured that out pretty quickly too. In Canada, no home is without a furnace with heating ducts leading to every room in the house like the tentacles of a giant octopus. Without these systems we simply couldn’t survive the winters and is probably one of the reasons for our large energy consumption. In addition, new regulations over the past decade or so make it necessary for home builders and furnace installers to ensure that a ‘fresh air’ intake vent from outside directly to the furnace is installed as a safety measure against carbon monoxide poisoning and other potential problems.

We had a new more efficient furnace installed a few years back and because it was a ‘retrofit’ in our home the fresh air intake was installed and placed at the side of our home about 3 feet off the ground. Are you getting the picture?

Yep, the skunk spray aimed at the cat at that very side of our home was sucked in through the fresh air vent and efficiently distributed to every room of our house!!! I cannot describe accurately how permeating this scent from hell really is. No amount of odor eating sprays, scented candles and washing was going to help us. We were going to have to suffer. And suffer we did.

I won’t bore you with the logistics of vent spraying, running ceiling fans, opening doors and windows, running the furnace over and over again to burn out and evaporate the smell. Over 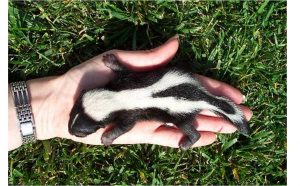 the next few days and literally weeks, we just glumly lived with it. Apologies were offered to company arriving and even when we thought it was finally gone a trip out for the afternoon would have us greeted by the odor when returned and came in the front door. Did I mention how permeating the smell is? For example, if I opened a cabinet door in our wall shelving system, I could smell the lingering odor. It just took time and finally after about six weeks we found ourselves passing the ‘company’ test. We’d anxiously ask anyone coming in “can you smell anything weird?” At first they knew what it was immediately but eventually it was gone.

The only good thing coming out of this whole experience is the fact that I think the skunk may have been living under the back deck and had been foraging in the dark when the cat(s) came snooping. When under threat skunks will move somewhere else. We haven’t seen or smelled our stinky friend since then. And now that I think of it, I haven’t seen any cats either.Yes!! Peace at long last.

P.S. Watch those mini-split air conditioning intake units in Mexico if they are located on a ground floor. This is an experience I wouldn’t wish on anyone. 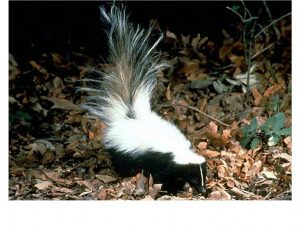 “Over The Wall” – Another Misadventure