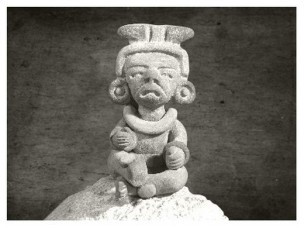 By Kirby Vickery on the October 2019 Edition

Let’s say that you’re a Mayan farmer, from any time period from the ancient Mayan Empire that we are still finding to be larger than we thought, to, even today or tomorrow, for that matter. Your chief crop wouldn’t have changed through all this time. It is maize or corn. As you are planting it, you realize that you are going to need some extra help in getting in a repeated good crop that sells well, allowing for you and your family to grow and prosper.

You can get the Mayan gods to smile on you if you believe in them, and there are still people all over the Yucatan Peninsula and the upper Central American countries that do. Or, you can have a Christian priest bless your efforts. Better yet, if ancient belief is something that would be even more beneficial, then you could go all the way back into the Olmec era in mythology and invoke the good will of a Chaneque (the Nahual or Aztec name), or Aluxe, for protection and blessing. That will run you back to 1600 BCE.

Aluxes are knee-high dwarf-like beings that are considered to be spirits of Mayan ancestors who roam the Mayan jungle. They are said to be invisible but are able to assume physical form and resemble miniature, traditionally dressed Mayans. If Aluxes are treated with respect, they can bring good luck and be very helpful. If they are not, they will play tricks on people.

Some believe that Aluxes appear when a farmer builds a little house for them on his property in a corn field and performs the proper ceremony.

For seven years, they will help create favorable conditions for the crops to grow. At the end of seven years, the farmer must seal the windows and doors of the little house with the Aluxe inside. If this is not done, the Aluxe will run wild and start playing tricks on people. Various versions of this belief still exist.
When the bridge to the Cancun airport was being built, the architects and engineers were baffled by the fact that it kept falling apart for no apparent reason. Locals of Mayan descent pointed out that they had not asked for permission to con-struct the bridge.

The architects and engineers insisted that all government permits were in place, but the locals clarified that they also needed permission from the Aluxes. They aren’t evil. In the case of the airport bridge, they were simply guarding their land.

Aluxes were also blamed for the collapse of the stage at Chichen Itza before an Elton John concert. After a ceremony was held with offerings, the concert went off without a hitch.
In 1844, the American showman extraordinaire, PT Barnum, had traveled to the court of Queen Victoria with his human circus act. Barnum presented to her two special members of his per-forming troupe, a pair of micro encephalic dwarves from the jungles of Mexico.

The dwarves bowed and greeted her most Britannic majesty, in Spanish and in their native Maya dialect. In his introduction, Barnum claimed that the dwarves were “the last degenerate remains of a caste of high priests found, at great expense, in a lost Maya city.” As the acrobatics show in the palace com-menced, the serious queen was, indeed, amused. She showed her delight openly for these tiny Mexican visitors. Other nobles and notables at the English court did so, too.

It was only later, in reflection in her personal diaries, that the queen expressed a sense of sadness for these two who she thought were relegated to a most miserable existence. While Barnum was known for his exaggeration and tall tales, there might have been a part of him that actually believed that the two Maya dwarves he was traveling with were part of a small race of magical, feral, humanlike beings who lived in the mountains and forests of Mexico and Central America. He had heard the story of the Aluxe from the tiny Mayan acrobats themselves.

The world has known of little people from every continent. There are the Hobbits which are actually rumored to be the original Homo Floresiens. Then there are Pygmies, Memegwaans, Farias, Brownies, Altar, Gnomes, Goblins or Gremlins, Leprechauns, Pixies, TchoTcho, just to mention a few, some familiar and some not. In Mexico, we also see a tradition of powerful, nearly invisible, small statured, human-like creatures, in two areas.

We see what is called the Aluxe or plural, Aluxeob in the Ma-ya heartland, encompassing the Yucatan Peninsula and modern-day Mexican states of Chiapas and Tabasco. In the eastern and southern portions of the former Aztec Empire notably in the present day states of Veracruz, Oaxaca and Guerrero the “wee folk” were called Chaneques. The word Chaneque comes from the Nahuatl word meaning “those who inhabit dangerous places.”

So, we see the magical little people legends confined to the eastern and southern parts of the modern-day nation of Mexico. To this day, people believe in these creatures and the Aluxe/Chaneque phenomenon is being studied by serious Mexican and international researchers.

So, are these stories that are constantly heard all around the globe true? Or, how could these ancient cultures have contact in order to share these kinds of legends? Some theories suggest that Scandinavian pirates landed in America, spreading their beliefs among natives.

The truth is that even in present day, people still take into ac-count these creatures and they worship them, and even fear them, letting them be part of their everyday life.

Some will tell you that they carry a slingshot to aim and fire on disagreeable people or other animals they don’t like. Others say they can shape shift like Odo in Star Trek, Deep Space Nine. They can be killed but, it is difficult, and has to be done concisely. Otherwise, they turn into contemptuous evil pranksters with the ability to kill.

Did they exist? Do they still exist? It’s another case of modern history coming into conflict with ancient mythology. Modern archeologists are digging up bones of various small people with some more human-like than others. Facts pop out of the dust and mire. 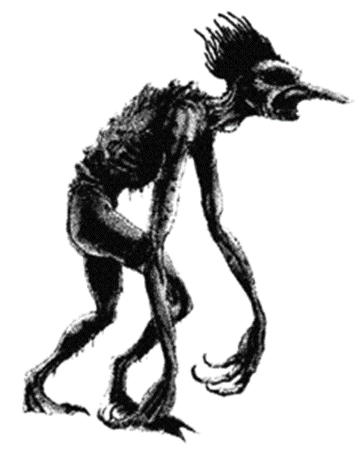 One of them is that no one can come up with an explanation for the ragged DNA historical code these small people have that follows local histories all over the world. So, why not? What have you got to lose?

Should you ever meet one, I would highly recommend that you treat it with honor and respect because, if you don’t, you should remember that they have the power of the ancient gods and a devious sense of humor which could be threatening to life –yours. 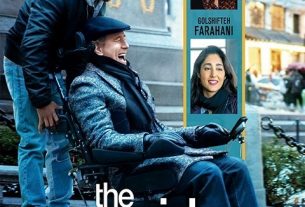 The Upside- At the Movies