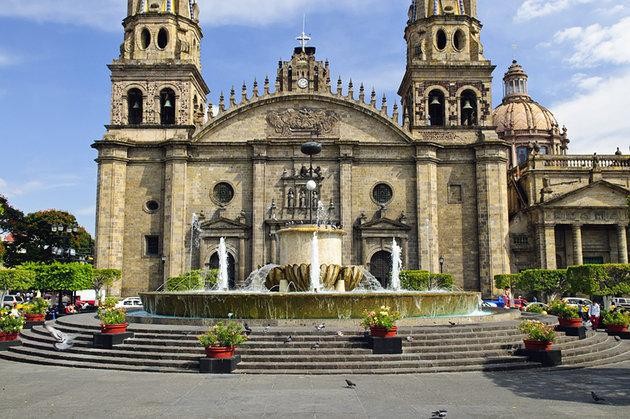 Early this year we had occasion to be in Guadalajara for meetings. At the same time, my sister-in-law and 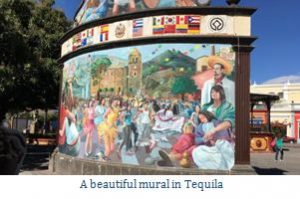 her husband from Canada were finishing a months’ stay in Bucerias Nayarit, just north of Puerto Vallarta. Since we were already away from Manzanillo and using our own car (rather than bussing with ETN this time) we decided to turn the trip into a new adventure and drive to Bucerias, pick up our family members and return to Guadalajara for a tour of the historic section and some fun and food around the city. We booked a wonderful old hotel called the Morales which is smack in the middle of the historic section and dates back to 1888. From there, one can walk to museums, view ancient gothic cathedrals and overdose on Spanish and Mexican history plus find delightful places to eat and, of course, shop. 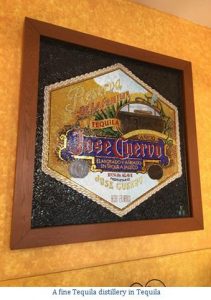 At this time of year the drive was very beautiful. Having bloomed from the previous rainy season, the mountains were lush and green with foliage while we crossed running rivers and creeks flowing under the numerous bridges that span the valleys between the mountains. The highway was busy but we arrived safe and sound in Bucerias in due course.

Having stayed overnight and dined and chatted together in a lovely courtyard restaurant, we all jumped in the car the following morning and headed out for Guadalajara. During our conversation the night before, we had all decided to take a side trip into the town of Tequila since we would be passing so near to this hub of famous tequila breweries and tourist attractions on our way back to Guadalajara.

How we wished we had planned an extra day in Tequila once we arrived. But it was terrific just to have a few hours to savor the central square, walk the streets and view the art shops and learn more about the available Tequila factory tours (which we did not have time for). We have since determined that we will return in order to see more of this wonderful location.

The municipality of Tequila is just 60 klm from Guadalajara and has a population of roughly 40,000 people. 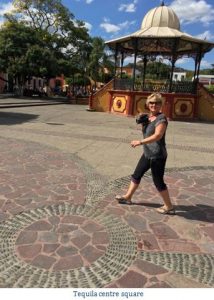 The town, of course, is world famous for its production of various brands of tequila.

Made from the local blue agave plants, by law, only those locally-approved distilleries in the municipality and four other states in Mexico are allowed to legitimately use the term Tequila. Other versions of tequila might be called Mezcal. Indeed, forget about the ‘rot gut’ version of tequilas that we’ve all seen in some movie, in fact the best tequilas are to be sipped like fine brandies from a snifter and enjoyed for the bouquet and smoothness that many of us have happily discovered.

Later that evening we arrived at the Hotel Morales with its cavernous soaring cathedral ceilings and surrounding courtyards. We would enjoy several morning breakfasts and head off to tour the surrounding historic areas. 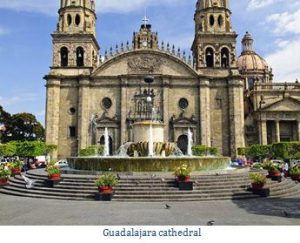 I highly recommend this beautiful hotel, not only for its tourist location, but also for its extremely reasonable pricing. It also provides secured underground parking. The staffing is abundant and cordial and the food in the main level dining area (under those cathedral ceilings) was excellent. We also enjoyed the stylings of a talented pianist who played various pieces on a grand piano that carried the music throughout the lobby and dining areas. The rooms were equally inviting and spacious.

From the Hotel Morales, there are numerous attractions within walking distance. There are also traditional horse and carriage tours that are a lot of fun and easy on the legs. If you can understand some basic Spanish, the carriage drivers will give you a complete history of the sights along the way. Our Spanish is pretty sketchy but between our lessons and what we’ve learned thus far we did manage to understand a good deal of the tour. There are a number of gorgeous and interesting locations to view. Though we had four days it wasn’t enough so some ‘must see’ locations will await a future visit.

Here are a few high points:

The Guadalajara Cathedral is located on the lovely public square known as the Plaza de Armas. Its façade 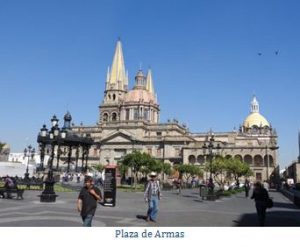 faces the adjoining Plaza de los Laureles with a lovely large fountain at its centre. It was built between 1558 and 1616 with many alterations in later periods. It is magnificent. Though Baroque on the exterior, its interior is mostly Gothic and displays breathtaking artwork by various Mexican artists such as Cristobal de Villapando, Miguel Cabrera and Murillo.

The Government Palace in the Plaza de Armas was started in 1643 and completed in 1774. This splendid Baroque building is well worth a visit to see its interior, murals depicting the War of Independence and the heroes of the three Mexican wars.

The Churches of Santa Monica and San Agustin are accessible from the historic centre. Just a few blocks north of the Cathedral, the Church of Santa Monica is notable for its Baroque façade as well. With twisted columns and intricate carvings, it is an ode to the symbols of religious orders. 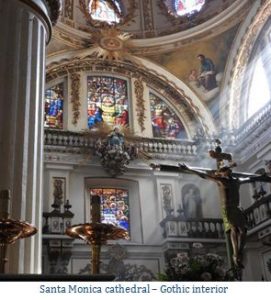 The Regional Museum of Guadalajara is just a short stroll from the Plaza de Armas. Housed in a former 18th century seminary, the building at one time also served as headquarters and a prison during the War of Independence. The museum opened in 1918 and one must tour the exhibits to fully appreciate the breadth of displays. Put aside a good deal of time to do so if you can.

The Rotunda of Illustrious Men is also near the Plaza de Armas and was constructed in 1952 in honor of the states best-known historical figures including famed artist Jose Clemente Orozco.

Having spent some wonderful days in Guadalajara it was time to check out of our hotel and head back to Manzanillo where sun and surf awaited us. With our heads full of history and wonderful images, we all felt that we had seen and learned so much more about this wonderful country of Mexico and its equally wonderful people. 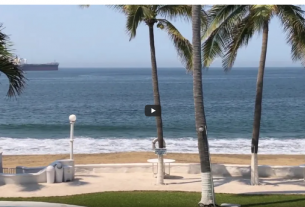 “The Sky is Falling” Chicken Little