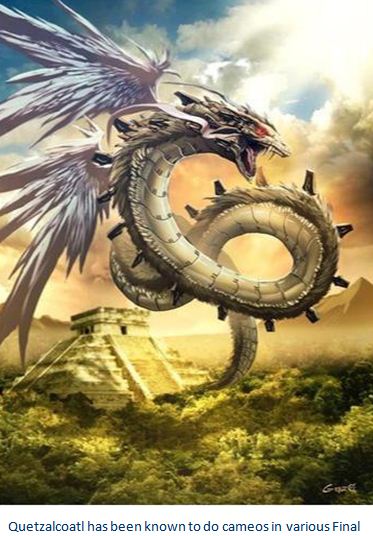 By Kirby Vickery from the October 2016 Edition

The culture of the Nahuatl speaking peoples is, at best, poorly understood by most modern folks.

One of the prime reasons is the fact that the Mesoamerican god names are long and difficult to pronounce even by native Hispanic peoples. If you trace our mythological ‘belief’ system back into any of our root cultures, you find gods, either good or bad, but never both or sometimes one or the other. So the concept of what is called a ‘duality’ (both good and bad, male and female, etc.) within each of the Mesoamerican gods is a difficult idea to swallow.

Most historical archaeologists feel that use and practice of sacrificing people is probably the most difficult concept of their religious practices to understand. Not so much the one by one termination of one’s enemy on alter stones, even though that was really excessive, but, the fact that these people would line up to be sacrificed, preferring that to a quiet death in their houses or the honor of having one or more of their children chosen for sacrifice. It has been shown that the majority of these sacrifices were done by and for the ‘Priest Class’ which held a social control over the populous tighter than the Druids had over the Celts.

For the past three years or so I have been writing about “Aztec Mythology” and have acquired a great deal of information concerning them and other Mesoamerican societies. Occasionally, I would branch into straight history or sociology as the mood hit me (being married to the owner and publisher of the magazine had its privileges). After a time, I was able to separate some of the folklore from fact and some from fiction. It amazes me the number of stories that modern people take for straight mythology actually have some historical fact of basis for belief.

A few months ago, I published a story that I thought was a folklore piece but have since learned that it is 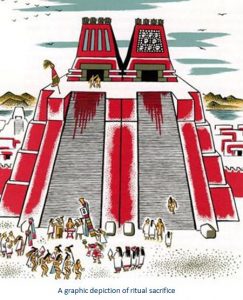 much more than that. Not only is the story historically true, it even lends itself to the origins of the Aztec Empire if you want to call it thus. While teaching English Literature, and especially in my history classes, I always tried to give a broad banded look for my students into what was going on in the rest of the world. Or, at least, a broader picture to the story or immediate subject I was teaching. Toward this end, I am going to represent that story.

The Aztec was a Johnny-come-lately tribe of the Nahuatl-speaking peoples of the Mesoamerican world. They filtered in during the 1200CE years in small groups, selling themselves as second class citizens and working accordingly. Their chief occupation was being mercenaries to whatever lord was in charge in the area they were in. Today Nahuatl translates to mean Clear Speech. There are evidences of it as far north as Arizona and Utah. During their time they were known as a warlike tribe calling themselves the Mexica and they referred to the area of their origin as Aztlán. They had a written language but the priests ordered all references to their origin destroyed during Hernán Cortés’ invasion. 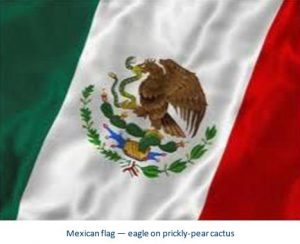 By the time the Aztec’s started to amass in Mesoamerica, there were a number of city-states well established under the Mayan civilization which had been taken over by the Toltec’s about three hundred years past (about 900CE).

Being warlike and independent, the Mexica would anger one lord then another and be told to move on. All the while, they were growing in population and adopting, absorbing and sharing the local culture and beliefs as they went, while always growing in strength.

In one notable legend, the Mexica asked the ruler of the city-state of Culhuacan, who they were vassals of at the time, for one of his daughters. The king granted it thinking it was a political marriage he was accepting, but when he got invited to a festivity, which he thought was said marriage, he was met with the high priest of the Mexica wearing the flayed skin of his daughter.

The Mexica had actually asked for the girl for a sacrifice and not a marriage as the king had thought. He immediately banished the entire population of Mexica to the swampy waters of Lake Texcoco thinking that he had rid himself of them as they would probably die of starvation.

The Mexica maintained their own myths and legends. One of them entailed finding an eagle eating a snake while perched on a prickly pear. And there he was in the middle of a small island in the middle of this swampy lake. So they built the city of Cuauhmixtitlán, Place of the Eagle Between the Clouds, later renamed Tenochtitlán, the Place of the Prickly Pear Cactus (in honor to their first high priest Tenoch ), and its twin city Tlatelolco, Place of the Mound of Sand, home of the largest market in the Americas.

They later formed the Triple Alliance with neighboring city-states of Texcoco and Tlacopan, beginning what is now known as the Aztec Empire. Mexico City is there today.