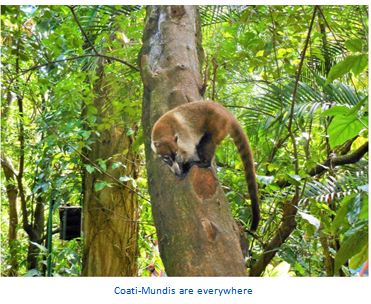 By Dan and Lisa Goy from the September 2017 Edition 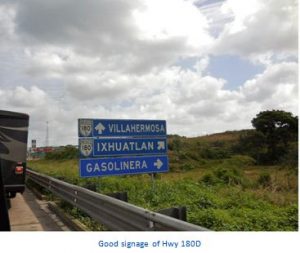 We left the RV Park in Catemaco about 8 am with Mike and Kelly in the lead headed for Villahermosa in the state of Tabasco; we estimated a 6-hour drive of just over 300 kms, almost 200 miles. Our destination was a resort that includes camping and a pool, and is very popular with locals and families, called “Recreativo El Gordo y San Pancho.” This was a scenic drive as we continued more eastbound now south through the tropics, leaving the state of Veracruz.

Travelling Hwy 180 early on, the road was not great and we had to be careful and watchful for potholes. This was also the case on the toll portion of the highway. We briefly lost our #6 Bruce and Marian at a Hwy interchange as they got stuck behind some traffic and prematurely exited off the Hwy 180 as we transitioned Hwy 180D. We simply pulled off at the first opportunity so #6 could get themselves sorted out and rejoin the group. 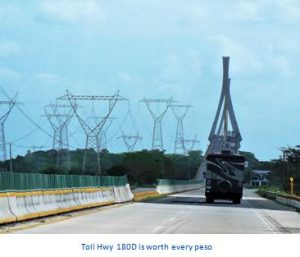 As we entered the state of Tabasco, the road improved dramatically with few potholes and much better pavement. A couple of body breaks and a fuel stop and we arrived at our destination. On arrival, it became apparent at the campground/pool/ banquet hall, there was event going on, so we cooled our jets in open field adjacent to our camping area full of parked cars.

We started moving into the campground at 5:30 pm and Rafael and Eileen were the last to park by 6:30 pm. The pool party was over by about 6 pm but the festivities at the banquet hall kept going strong and went late, music blaring in typical Mexican Style.

The next morning, we headed off to La Venta Museum Park at 9 am and ran right into some crazy traffic because of major road construction into town. Fortunately, we got a parking spot at the entrance to the Museo and spent the next couple of hours touring a wonderful exhibit of Olmec sculptures. La Venta Museo itself is located on an island in a swampy area beside the river Tonalá near the Gulf of Mexico. Due to the construction of an oil refinery and an airport, big parts of this historical site have been destroyed. Hence artifacts that were found there have been moved to the La Venta Park Museum in town. Unfortunately, the attached zoo reminded me of old Stanley Park from decades ago. We all felt bad for many of the larger cats
on display. I have to say, the jungle setting in the middle of the city was nothing short of spectacular. This Museo is well worth the stop.

Returning to campground, we stopped at WalMart for some shopping and supplies. Arriving back at the

RVs, the gals went to the pool and the guys enjoyed a beverage. Before you knew it, was a Happy Birthday Happy Hour for yours truly. Good snacks, summer beer, great friends. This really could not have been much better. We even had some dancing with lots of my favorite tunes. The next day we left early, led by Rafael and Eileen. Our 6:37 am departure was our attempt to miss road construction rush hour traffic. It worked, for the most part. 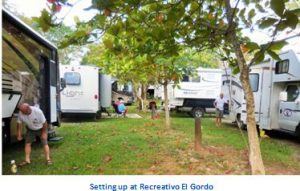 Villahermosa literally means Beautiful Village and is the capital and largest city of the Mexican state of Tabasco, approximately 863 kilometres (536 mi) from Mexico City. Tabasco’s political powers reside here. It is the main city of the state of Tabasco and is home to the state’s largest population. The city is an important business center for the Mexican oil industry. In 2008, the city consisted of 33 colonias and fraccionamientos.

Also known as La Esmeralda del Sureste (The Emerald of the Southeast), Villahermosa is a modern city, rich in natural re-sources, in terms of both agriculture and farming. Commercially, the city is served by major merchants, such as Liverpool, Fábricas de Fráncia, Palacio de Hierro, WalMart, City Club, Soriana, Comercial Mexicana, and Home Depot. All the major national banks are represented in the city as well. 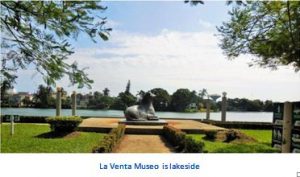 under the name of Villa Hermosa, in 1826 the village was raised to the rank of city under the name of San Juan Bautista de la Villa Hermosa (Saint John the Baptist). During the French intervention in Mexico, French troops occupied the city in 1863. In 1916, the governor of Tabasco, Francisco J. Múgica, ordered the restoration of the city’s name to Villahermosa. Today Villahermosa is a modern city in southeast Mexico and, possibly only after Mérida, Yucatán, it is the most important business and commercial point in the long stretch between Mexico City and Cancún.

Like most of Tabasco, Villahermosa has a tropical monsoon climate. Temperatures during spring and summer seasons can reach upwards of 40°C (104 °F), with humidity levels hovering around 30% during the same period (for total humidity-adjusted temperatures in the high forties). During its short “winter”, Villahermosa’s climate is very humid but daytime temperatures decrease to around 28°C (82 °F). 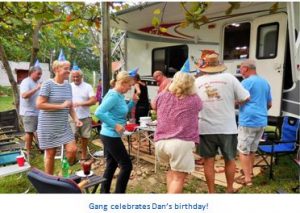 The most stunning season of the year is spring, as the flamboyán, guayacán, macuilis, and other tropical vegetation bloom and dress the city with a beautiful sense of joy along its major thoroughfares. Villahermosa is located in the southeast of Mexico between the rivers Grijalva and Carrizal. The average elevation of the city is 10 meters above sea level. The city also has several lagoons, the largest and most important of them being La Laguna de las Ilusiones (Illusions Lagoon). In October 2007, Villahermosa suffered its worst flood in recorded history. Several hundred thousand people were displaced because of flooded homes. 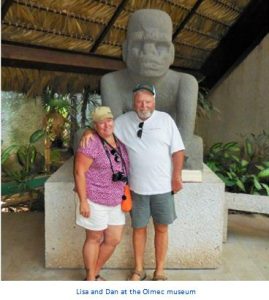 The Olmecs were the first major civilization in Guatemala and Mexico following a progressive development in Soconusco and modern southwestern pacific lowlands of Guatemala. They lived in the tropical lowlands of south-central Mexico, in the present-day states of Veracruz and Tabasco. It has been speculated that Olmec derive in part from neighboring Mokaya and/or Mixe Zoque.

This area is characterized by swampy lowlands punctuated by low hills, ridges, and volcanoes. The Tuxtlas Mountains rise sharply in the north, along the Gulf of Mexico’s Bay of Campeche. Here the Olmec constructed permanent city-temple complexes at San Lorenzo Tenochtitlán, La Venta, Tres Zapotes, and Laguna de los Cerros. In this region, the first Meso-american civilization emerged and reigned from c. 1400–400 BCE. 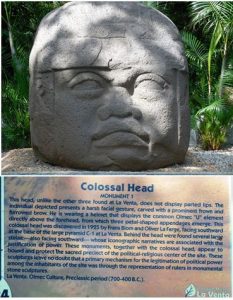 culture had emerged, centered on the San Lorenzo Tenochtitlán site near the coast in southeast Veracruz. They were the first Mesoamerican civilization and laid many of the foundations for the civilizations that followed. Among other “firsts”, the Olmec appeared to practice ritual bloodletting and played the Mesoamerican ballgame, hallmarks of nearly all subsequent Mesoamerican societies.

La Venta consisted of several pyramids that were constructed as mounds, built from clay. The high time of the La Venta culture started around 1200 BC. The site was abandoned from 400 BC on. It is very famous and many monumental stone figures have been found there. Four of them are gigantic stone heads. The aspect of the Olmecs most familiar now is their artwork, particularly the aptly named “colossal heads”. The Olmec civilization was first defined through artifacts which collectors purchased on the preColumbian art market in the late 19th century and early 20th century. Olmec artworks are considered among ancient America’s most striking. 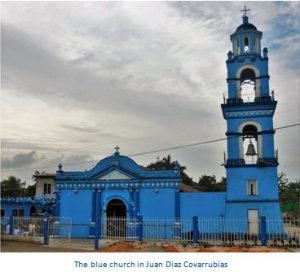 Scholars have yet to determine the cause of the eventual extinction of the Olmec culture. Between 400 and 350 BCE, the population in the eastern half of the Olmec heartland dropped precipitously, and the area was sparsely inhabited until the 19th century. According to archaeologists, this depopulation was probably the result of “very serious environmental changes that rendered the region unsuited for large groups of farmers”, in particular changes to the riverine environment that the Olmec depended upon for agriculture, hunting and gathering and transportation. These changes may have been triggered by tectonic upheavals or subsidence, or the silting up of rivers due to agricultural practices. 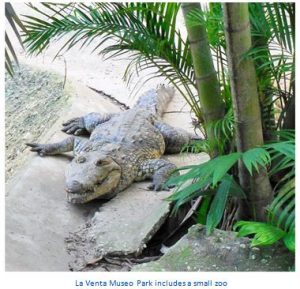 blanketed the lands and forced the Olmec to move their settlements. Whatever the cause, within a few hundred years of the abandonment of the last Olmec cities, successor cultures became firmly established. The Tres Zapotes site, on the western edge of the Olmec heartland, continued to be occupied well past 400 BCE, but without the hallmarks of the Olmec culture. This post-Olmec culture, often labeled EpiOlmec, has features similar to those found at Izapa, some 550 km (330 miles) to the southeast.

The Long Count calendar used by many subsequent Meso-american civilizations, as well as the concept of zero, may have been devised by the Olmecs. Because the six artifacts with the earliest Long Count calendar dates were all discovered outside the immediate Maya homeland, it is likely that this calendar predated the Maya and was possibly the invention of the Olmecs. Indeed, three of these six artifacts were found within the Olmec heartland. But an argument against an Olmec origin is the fact that the Olmec civilization had ended by the 4th century BCE, several centuries before the earliest known Long Count date artifact. 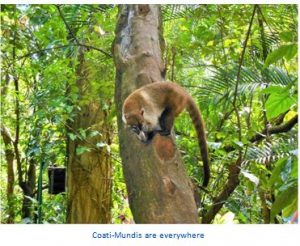 The name “Olmec” means “rubber people” in Nahuatl, the language of the Aztec, and was the Aztec name for the people who lived in the Gulf Lowlands in the 15th and 16th centuries, some 2000 years after the Olmec culture died out. The term “rubber people” refers to the ancient practice, spanning from ancient Olmecs to Aztecs, of extracting latex from castilla elastica, a rubber tree in the area. The juice of a local vine, Ipomoea alba, was then mixed with this latex to create rubber as early as 1600 BCE.

Early modern explorers and archaeologists, however, mistakenly applied the name “Olmec” to the rediscovered ruins and artifacts in the heartland decades before it was understood that these were not created by people the Aztecs knew as the “Olmec”, but rather a culture that was 2000 years older. Despite the mistaken identity, the name has stuck. It is not known what name the ancient Olmec used for themselves; some later Mesoamerican accounts seem to refer to the ancient Olmec as “Tamoanchan”. A contemporary term sometimes used for the Olmec culture is tenocelome, meaning “mouth of the jaguar”. 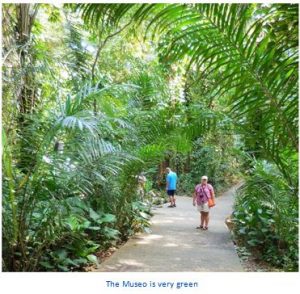 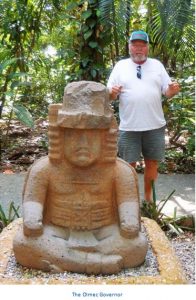 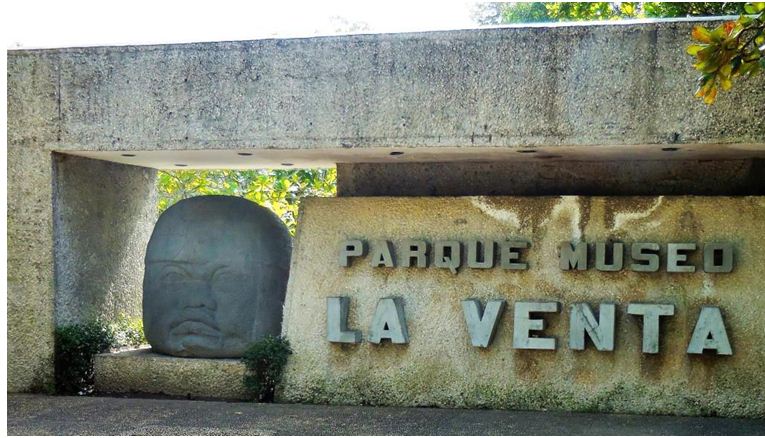 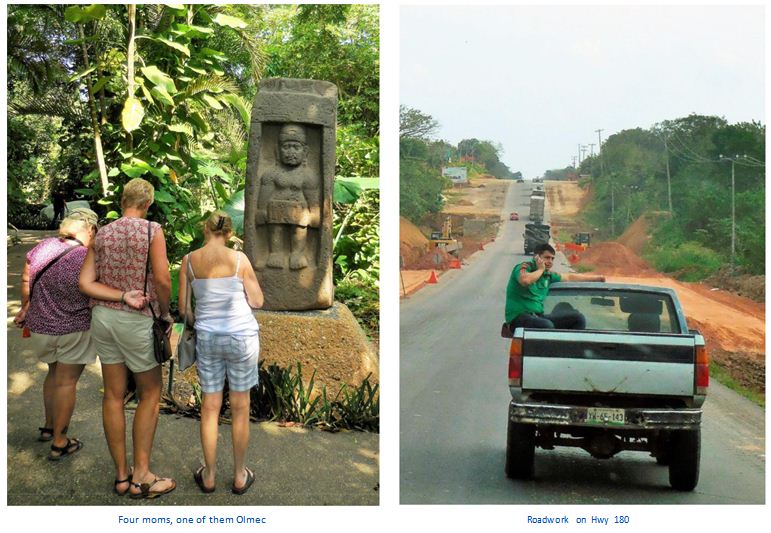 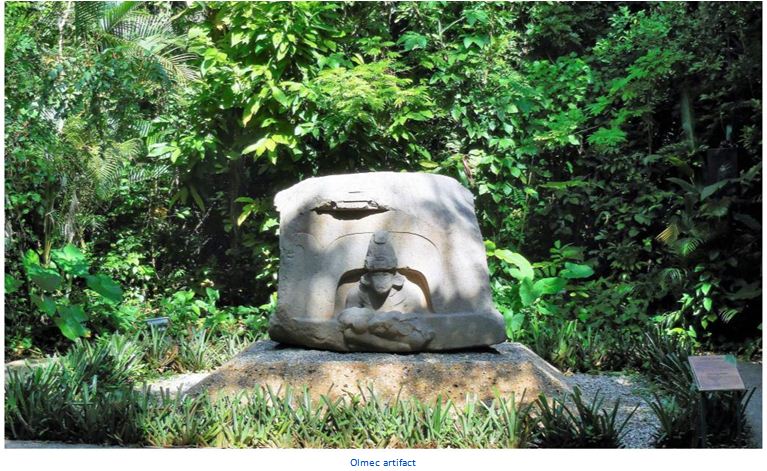 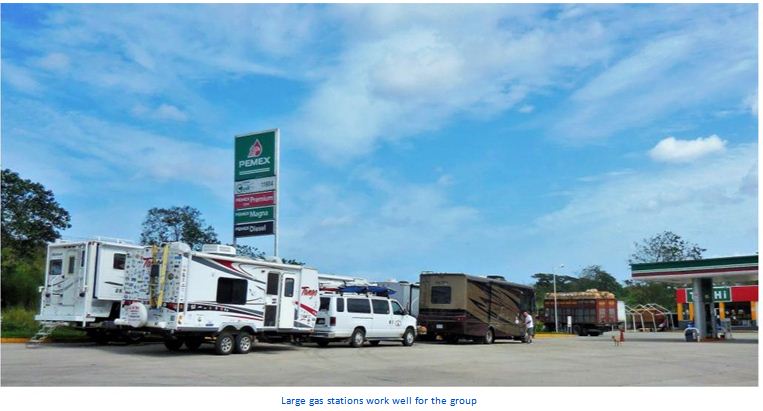