By Terry Sovil from the June 2015 Edition 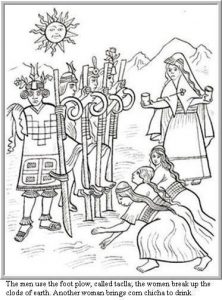 My good friend Carlos and I were in Centro Manzanillo. It is late morning and lunch sounds good. We pop into a busy local restaurant. Part of the meal is potato salad. Is that Mexican? Back in Minnesota, United States, we had a fast food restaurant called “Taco Johns.” They served potatoes with their meals, what they call “West-Mex” style food. I thought it was because it was Minnesota and the mid-west thing to do. Something the locals could relate to eating in a “Mexican Restaurant.” Where tacos don’t look like the tacos here and ketchup can be too spicy for many. They called them Potato Olés which would be pronounced “OH LAYS.” Well, Minnesota is also the land of the Scandinavians, so I used to laugh and say “OH LEE” because we had a lot of Sven and Ole jokes about.

So I asked Carlos “Is this a normal Mexican side dish? Potato salad?” He assured me it was. How could this be? The potato came to North America via the Europeans that brought it over. Right? Remember the Irish Potato Famine? My immediate thought was that potatoes must have migrated down with donuts, smoothies, Dairy Queen and Snickers bars.

The Inca Indians in Peru were the first to cultivate potatoes around 8,000 BC to 5,000 B.C. The Incas were masters of plant domestication, especially potatoes. Their development of the potato was remarkable: from 8 species of weeds having toxic tubers to more than 3000 distinct potato varieties.

In ancient ruins in Peru and Chile, archaeologists have found potato artifacts and remains that date to 500 B.C. The Incas ate them and cultivated them. They buried them with their dead. They hid them in concealed bins in case of a war or famine. They dried them and carried them on long journeys. They called them “papas,” sound familiar? They even had a prayer for them: “O Creator! Thou who givest life to all things and hast made men that they may live, and multiply. Multiply also the fruits of the earth, the potatoes and other food that thou hast made, that men may not suffer from hunger and misery.” So the Spanish found them when they first arrived in Peru in 1532. They wrote extensively about the potato and how it was used to support Inca existence. They brought them back to Spain.

The Spanish thought they were a kind of truffle and called them “tartuffo.” They noticed that sailors that ate papas didn’t get scurvy. The potato went to Italy and England about 1585, to Belgium and Germany by 1587, to Austria about 1588 and to France about 1600. And just like so many things in our cultures today that is new or different it was often regarded as weird, poisonous and evil. It destroyed the soil it grew in; it caused leprosy, syphilis, early death, sterility and rampant sexuality, probably all at the same time.

It was the distinguished Sir Walter Raleigh that had brought the potato to his home near Cork, Ireland. The story is that he planted them, cultivated them and then presented some to Queen Elizabeth I. All of the proper folks were invited to a big meal featuring the potato in every course. Sadly, the cooks were totally unfamiliar with this new food and they served up a hearty dish of boiled stems and leaves, poisonous, tossing out the lumpy tuber. It made everyone deathly ill so potatoes were banned.

Eventually potatoes were brought to the United States in the 1600’s but were not widely grown. Then Scotch-Irish immigrants started to grow them in 1719. It was in 1845-1849 that the “Great Famine” or “Great Starvation” in Ireland was caused by a disease in the potato crop. The average annual diet of a “global citizen” in the first decade of the 21st century is about 33kg (73 lb) of potatoes. It remains an essential crop in Europe where production is some of the highest in the world. Rapid expansion has also occurred in southern and eastern Asia. China is now the world’s largest producers and nearly a third of the world’s potatoes are grown in China and India. 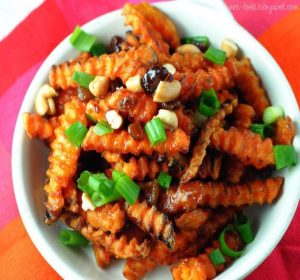 French Fries: They came to the U.S. when Thomas Jefferson served them in the White House. His chef, Collinet, chef for French King Louis Phillipe (reign 18301848), unintentionally created soufflés (or puffed) potatoes by plunging already fried potatoes into extremely hot oil to reheat them when the King arrived late for dinner one night. To the chef’s surprise and the king’s delight, the potatoes puffed up like little balloons. 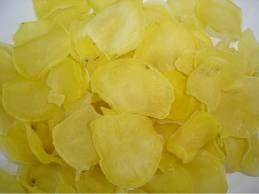 Potato chips: In 1853 railroad magnate Commodore Cornelius Vanderbilt complained that his potatoes were cut too thick and sent them back to the kitchen at a fashionable resort in Saratoga Springs, NY. To spite his haughty guest, Chef George Crum sliced some potatoes paper thin, fried them in hot oil, salted and served them. To everyone’s surprise, Vanderbilt loved his “Saratoga Crunch Chips,” and potato chips have been popular ever since.

So what about potato salad? Just like the potato the adaptations came about from geography and cultures. Printed evidence of American texts around 1875 contained a French, British and German recipe. The German version included bacon and was served warm! 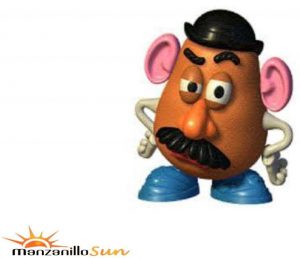