By David Fitzpatrick from the May 2011 Edition 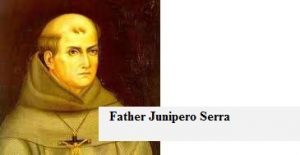 The Founding of the Franciscan Missions Fray Junipero Serra

One of the most influential religious figures in the history of Mexico was Fray Junipero Serra who contributed greatly to the development of the Catholic Church in New Spain and personally founded a number of missions in Central and Northern Mexico, many of which have continued to function without interruption to this day.

Junipero Serra, born in Mallorca in 1713, was at first destined for a career in academia. At a very early age, he was recognized for his intellectual acumen and his professors oriented him towards a university career. At the age of 17, he entered the Franciscan Order and, at the same time, was named “Lector” in Philosophy at Lullian University in Palma de Mallorca. He later completed his doctorate in Philosophy and held a chair in that discipline for many years at Lullian University.

Haunted by a feeling of not having fulfilled all his potential, and of “something missing” in his life, he made an abrupt career change at the age of 36 in 1749. Travelling to Mexico, he joined the missionary College of San Fernando de Mexico (in Mexico City), first as a professor, but later as a travelling missionary.

Arriving at Veracruz, the deeply ascetic Serra scorned the mule provided for his transportation (a considerable luxury in the context of the time) and made the 250 km. journey to Mexico City on foot. During the course of this trip, he was bitten in the leg by a snake and came very close to death. His leg never completely healed and he suffered painfully from it for the rest of his life.
After about 10 years at the College de San Fernando, he requested a transfer to the Sierra Gorda Indian Missions, about 90 miles north of Queretaro. In the Sierra Gorda, Father Serra was noted for his fervently devout and ascetic ways, denying himself all the comforts of the flesh, frequently flagellating himself and habitually wearing heavy tunics lined with metal spikes. In spite of his crippled leg, he generally undertook all journeys on foot.

As Father Superior of the Sierra Gorda, he took a deep personal interest in the conversion of the Indian populations and their spiritual and material well-being. He played a major role in the day to day teaching of the new converts, learning the language of the Pame Indians in order to teach them more effectively. During the same period, he founded five new Franciscan missions which continue their ministry to this day. They are jewels of colonial architecture and in modern times attract large numbers of tourists. (See photos)

In 1768, well past the age of 50, an advanced age for the time, Father Serra made another major career change. For political reasons, relevant in Europe but essentially unrelated to Mexican realities, the Jesuit Order was relieved of all responsibilities in the Spanish colonies and expelled from the Spanish possessions in the New World. As the Jesuits had supervised the Catholic Missions in Baja California, these missions were taken over by the Franciscans with Junipero Serra as “Padre Presidente”.

As leader of the Catholic Missions in Baja California, he founded only one new mission: San Fernando Rey de España. He intended to continue his proselytizing work in Baja much has he had done in the Sierra Gorda, but once again, political realities intervened. The Spanish Crown was beginning to fear competition from the British and Russians who were exploring the west coast of North American. Under royal influence, therefore, the Church extended its territory northwards. A combined Franciscan/Royal expedition began the colonization of “Alta

On July 1, 1769, Father Serra personally founded the Mission San Diego de Alcala, the first of many missions he was to launch in the region during the next fifteen years. He then moved directly to the Monterey Peninsula in Northern California where he built Mission San Carlos Borroméo de Carmel, (the famous “Carmel Mission”) which remained his home and administrative headquarters until his death.

The remaining years of his life were devoted to an intense agenda of teaching, proselytizing, ministering to the local populations and founding and administering new missions throughout the territory. He spared himself no hardship, working long hours every day and night and travelling long distances, most often on foot in spite of his injured leg. He was also very much aware of current events in the world and participated in them whenever possible. Much enthused by the republican movement in the British colonies to the east, he took up a collection in all his missions for the American rebellion. A total of $137 was collected and duly sent off to General Washington.

In all, Father Serra established nine new missions in Alta California, including San Luis Obispo, San Juan Capistrano, San Gabriel Arcàngel, and San Antonio de Padua. In 1776, he built a tiny mission on a newly discovered peninsula in Northern California and named it after the patron saint of his Order, San Francisco de Asis (Saint Francis of Assisi). The community that developed around this mission eventually grew into the city of San Francisco

He is remembered today as a hero and spiritual ideal in three countries: Spain, Mexico and the United States. His ministry had a profound influence on the spiritual development, of both Mexico and the U.S., and played an important role in implanting European civilization in the New World. Junipero Serra died in 1784 at his headquarters mission in Carmel, California. He is buried there under the floor of the Sanctuary.