By Suzanne A. Marshall from the August 2013 Edition

If you can view life as three complete acts then many of us who are now either retired in Manzanillo or wintering there, probably are enjoying our third act. Certainly that’s okay by me, as this is a dream come true.

Each and every time I return in the fall to Manzanillo and find myself sitting on our ocean view terrace I can’t quite believe that it’s real. And since you can’t turn the clock back and you probably wouldn’t want to, then life in Manzanillo becomes one of going with the flow; enjoying new cultural experiences, the Mexican youth who surround you and the joy of a beautiful climate and long sandy beaches where one can walk and watch the locals at play.

In particular it is great fun and quite captivating to watch the youngsters (10- 20 years of age and up), practice and perform their skills ‘skimboarding’. This is something that I was unfamiliar with other than the typical television exposure to surf boarding and the movies on the same subject. But skim boarding is somewhat different and does not involve paddling out into the surf for a fair distance in order to catch and ride a large surf breaker.

Skimboarding (flatland skimboarding) is an extreme sport using a wooden board about three times as wide as a skateboard and one and a half times as long. The board is thrown across a thin film of water left by a retreating wave. While the board is still moving the rider jumps on and skims across the water to do whatever tricks he or she can imagine.

Sometimes they can be picked up by an incoming wave and with the right skills can stay on the wave until it rolls and crashes on the beach before returning. The kids practice many tricks that involve jumping into the air with the board or performing a 180 degree spin while skimming. It is fantastic to plop down on the beach and watch these stunts for a while.

Our beach is called Playa Salahua or Playa Azul, known for its fierce undertow and often after storms at sea have brought in rough surfs, the wide sandy beach can be transformed into a rolling series of sand cliffs (dunes) where it was previously flat. These can be 4 to 5 feet tall.

Once in a while when this has occurred some of those young and carefree youths will practice back flips off the dunes in preparation for future jumps while skimboarding. 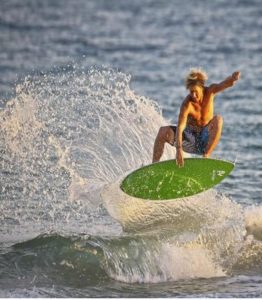 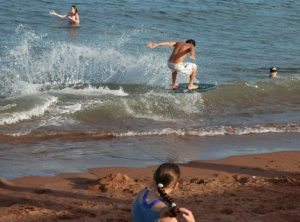 Although I first thought that skimboarding was a new variation of surf boarding because surfs are not as far out for longer rides, apparently this sport has been around since the 1920s.

In Laguna Beach, U.S.A. lifeguards used large plywood disks to skim the wavebreaks and skimboarding has evolved since then influenced greatly by the surfing industry. Although it is described as a sport for all ages, you wouldn’t catch me trying it.

It is also described as ‘extreme’ for a reason. Apparently, there are many broken limbs and sprains and strains. One young fellow just down the beach from us was taken to emergency with a broken ankle. 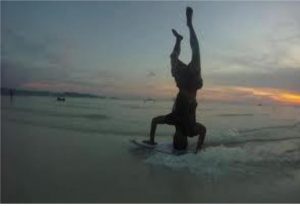 On the subject of surfs, one of the best places to surf in Mexico is Cuyutlan, a tranquil seaside town located about an hour southeast along the coast from Manzanillo.

Cuyutlan’s black sand beaches are a result of centuries of erosion of the volcanic rock lining this stretch of coastline. The beaches of Cuyutlan are excellent for surfing, especially the beach at Los Pascuales where the waves regularly reach heights of eight to fifteen feet or more.

Cuyutlan is best known for La Ola Verde (the green wave) a giant green wave that appears in the ocean as the sun sets and shines through the water. The green wave is most often seen during the months of April to May. The green color of the wave is attributed to ocean dwelling phosphorescent algae and plankton in the water. The locals however like to debate this theory. Cuyutlan makes for another wonderful day trip adventure in the Manzanillo area.

Take a walk on the beach soon and stop to watch the skimboarders practicing their stunts. The sheer glee will captivate you. 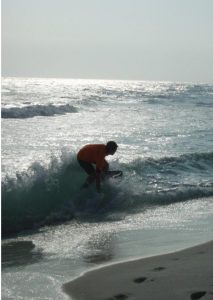 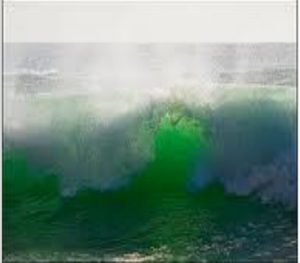