Certainly not the imported grocery items from the frozen north as all of the items that we cannot cook without having right at hand are at least double or three times the price in Mexico. But what we haven’t discovered and generally begun to use are the local products. Not many of us spend hours making refried beans or mole from scratch but the finished product is generally so incredibly good that it is unbelievable.

Not that I am suggesting that once we cross the border we immediately switch our culinary skills but we look for the replacements which are almost always there. Everyone travels to Mexico with the items they cannot get there, but these can be augmented with the many products available on the shelves in the stores.

I spent two weeks a few years ago learning and making Mexican dishes which were so flavorful and delicious they were almost a wonder. Have I made them again? No! Because, in general, Mexican cooking is worse than Chinese cooking in the lengthy preparation many of the dishes take. The amount of chopping and precooking is endless. In the north, many of us are so busy with outside jobs or activities that we have become very used to taking the short cuts. We buy readymade products that our mothers and grandmothers would never stoop to doing. The recipes now call for frozen bread dough or pie crust instead of giving the whole recipe from start to finish.

My own mother and grandmother would never buy a cake or pastry for any occasions apart from perhaps a wedding or major event; nothing was as good as homemade. They, like many Mexican ladies stayed home and did not work outside the house. Their work was in cooking or having cooked the meals that the family wished to have. That many times it was inferior because the lady of the house had never learned to cook was beside the point, hopefully she could employ a cook. All families managed on one salary because the now expensive alternatives were not available. No-one went out several times a week for dinner; they ate at home and all together sitting down at the table.

Nowadays, the northern career woman who is sometimes also the mainstay of the home still does not have a staff to help her. No-one now, has a career as housemaid as in the days of old when young ladies of good character went up to the ‘big house’ to work or to become a governess. Unless their employer’s are wealthy enough to give a decent living to their staff or are in a high governmental position no-one employs ‘servants’ anymore. In fact we are often lucky to be able to afford a cleaning lady one day every two weeks.

In Mexico, it is so much easier to have a maid come in every day to do the housework, laundry and cooking. With education not being available to everyone in years gone by, often, that was the only viable position for a young woman to have. The young men became gardeners or handy men for several local employers, sometimes still not making sufficient money to go around. It was every member of the family working together to forge the bond. Although things are changing with the forthcoming generation who have an education available to them and subsequently more opportunities available.

This is where the differences between the three North American countries are seen more clearly. In Mexico, everything is for the entire family. The old and the young live with each other or close enough to be able to support each other with their combined earnings. The elderly look after the youngest generation so that the younger and abler can work and bring home sufficient money to feed, clothe and house them all. This is why so many young men leave their families and go to the USA where the streets are ‘paved with gold.’ They then live alone, longing and pining for the family unit they left behind.

Many of us from the north, who worked hard at outside jobs or careers when we were younger, could still not afford to have home help. The families had all diversified and lived miles apart, so there was no overlapping of available family to help out when needed. No loving grandma available to tend to the small fry after school and bake cookies. In Mexico, that is what is available and this is their strength. The hierarchy of the family is upheld. There is, generally, respect for the elders. Whereas in the north that has largely gone by the board as even grandmas are working outside the house until they have to retire. Day cares have taken over that role. Sometimes it is good, often times not so good. The family unit has broken down and everyone is on their own.

So now, we have finally retired and can spend more time, away from our families, seeking the sun and relaxation

denied to us in our younger days. To our pleasant surprise, we can afford to have someone come in once or twice a week or more to help us out. No longer do we have to plan a day out, we can take it when we wish because someone is taking care of the house for us.

In the U.S. or Canada, a person is lucky to find someone come in for a few hours one day a week for $15 an hour. In Mexico, that is pretty much the daily rate! So for the $60 paid for one day, it is possible to have a person for probably three days and it is even possible to have them for a whole week. My goodness, for a little more we can have a gardener also.

Now we are talking! This is where our life begins. Unfortunately sometimes, the person we find in Mexico thinks that we are all richer than Croesus and have more than enough to go around their family also. When that happens, it can be very upsetting to realize that someone that we have trusted to come into our home is not trustworthy at all. On the fortunate side, the good people far outweigh the bad and with a little research we can find the right person. We found one such person and were lucky enough to have her with us for over five years before she succumbed to the allergies of being around our dog. That was a sad day.

Now I’m away from that life and oh how I long to be back. In the warmth of both the sunshine and in the spirit of the people. 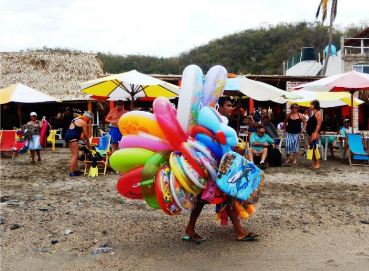 10 Ways To Save Energy & Money In Mexico