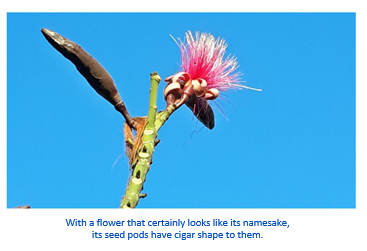 By Tommy Clarkson on the January 2021 Edition

Also known as Pink Bombax or Wool and Cotton Tree

Upon seeing the flowers of the Shaving Brush Tree, one instantly comprehends how and why it got its name. But, beyond looking a great deal like what its name implies, they are quite unique and beautiful! In fact, those two descriptors apply to all manner of this plant, from its rather different trunk to its array of possible growth and presentation applications.

It is native to Southern Mexico, Guatemala, El Salvador, and Honduras and, via its advocates, has found its way, in abundance, to the Caribbean and Southern Florida. It sports a stout,smoothish, sometimes swollen, dark green trunk, often with a tortoise shell pattern and fissured with gray bark. But don’t let those wrinkles and gray fool you, the Pseudobombax ellipticum is a fast grower, attaining thirty feet (9.14 meters) or more, quickly.

I’ve read about – but never seen – specimens that, purportedly, have reached the sixty to seventy feet (18.28 – 21.33 meters) range in standup stature. But, quite interestingly, if grown in a pot and regularly trimmed, you have a wonderfully attractive, compact one of as small as three feet (.91 meters) tall.

As to body building, they’re not particular. They develop multiple trunks with that rather ornamental bark – as often as solitary ones (sometimes, with maturity, a bit bottle shaped) and what with its numerous stems, it’s often described as octopus shaped. Its limbs are not so musclebound and are usually of a lighter color of green, with vertical striations stripping of greens, yellows, browns and white. Often, they are, in fact, what an old chum of mine who – as a football pulling guard seemed to appear, wider than they are tall! 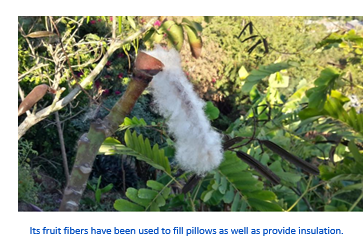 Its leaves are magnificent and reason enough to have this tree in your garden. They are long-stalked and comprised of five to seven, deep green, palmately arranged, leaflets. Each is elliptic to obovate and from six inches to a foot (15.24 – 30.48 cm) in length. These form a circular outline for the leaf whole. The freshly unfurled leaves often boast a beautiful reddish-bronze color. And, while the younger leaflets normally lay in a flat plane, the older ones become so large that they become pen-dent. They usually absent the tree in December or January with none to return until sometime in March.

Interestingly, the terminal flower buds begin to form in late autumn or early winter and in February expand from looking like brown toy tops to being six inches (15.24 cm) in length, velvety and cigar shaped. Riffle has described the ensuing process of them opening “at dusk to reveal five half inch-long (1.27 cm), recurved velvet brownish and white petals and hundreds of six to eight inch-long (15.24 -20.23 cm) white or pink stamens, very reminiscent of the vernacular name.”

This opening process is even a bit quirky as, when these flowers unfold, they sometimes do so with an audible pop! 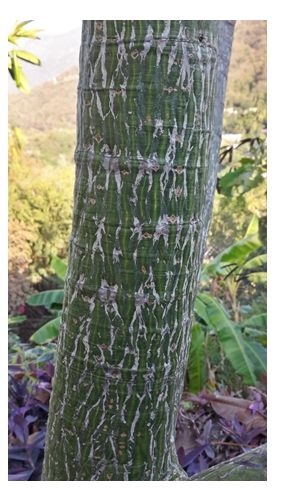 Riffle also observed that “the pink flowered forms are more spectacular during the daylight hours, but the white-flowered form is astonishingly attractive in the moonlight and is said to have larger blossoms.”

For quite some time, it was believed that these blooms were pollinated by bats. However, new research has divulged that they are pollinated by the wind or flower-feeding mammals. Additionally, they are regulars on the bees’ and hummingbirds’ busy floral social calendar!

The Shaving Brush Tree likes sun to light shade, fertile, moist and well-draining soil and is moderately salt, wind and drought tolerant. It is best propagated via cuttings or seeds. Its recommended landscaping applications include xeriscaping, on coastal areas, as a specimen tree, in street-side usage or for in-corporation in public areas.

Folks long before us have been enamored by the Shaving Brush Tree as evidenced by its presentation in the artwork on Mayan ceramic pieces. Today, the Shaving Brush Tree wood is sometimes used for carving handicrafts. Its seeds can be toasted and eaten and, I’ve read that the fruit fibers have been used to fill pillows as well as provide insulation.

Beyond that, by way of third party, Jim Conrad reports in his online newsletter, NATURALIST NEWSLETTER, that “In Las Plantas Medicinales de México I read that the flowers can be cooked to make a tea for fevers and coughs, and the powdered bark can tighten the gums.” 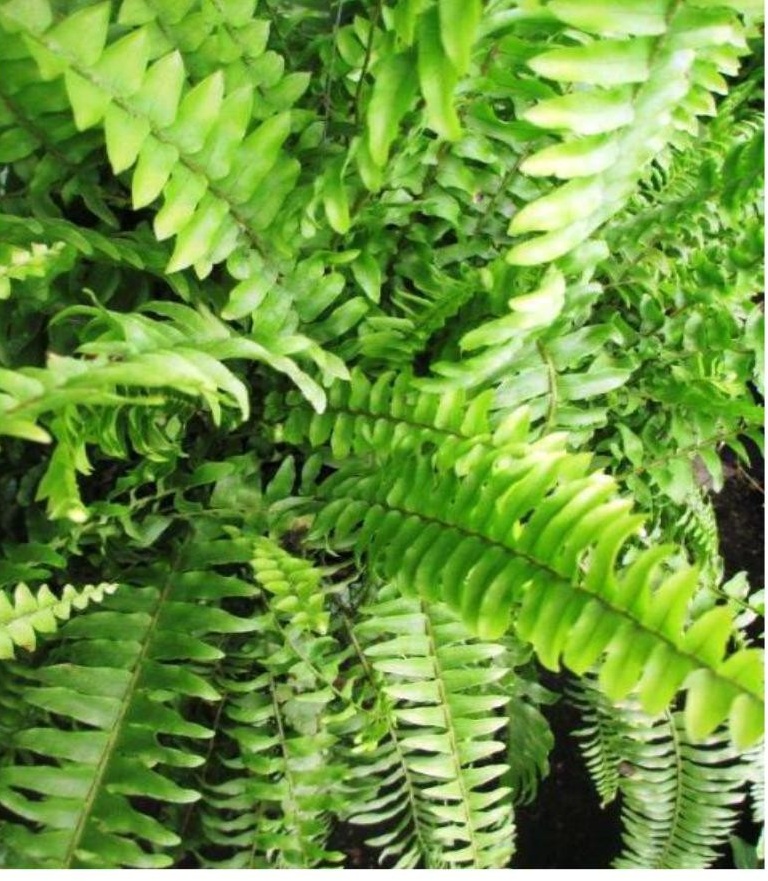