By Tommy Clarkson from the August 2013 Edition

Contrary to what many folks believe, the Sago Palm like the Traveller’s Palm, Cardboard Palm and Mada gascar Palm is not a palm tree. The Cycas Revoluta is actually a very hardy cycad and related to conifers and Ginkgo trees.

In fact, the Sago is the most commonly cultivated cycad in the world. But widespread though it may be, it is an extremely beautiful plant and rather easy to grow. If one has limited space , but wants a tropical “feel”, this is the right plant to use as, planted in a cluster or presented as a solitary specimen, it looks good anywhere!

Some call cycads “living fossils” as there origin can be traced back to the early Mesozois era 200 million years ago – and beyond. Fossils of this plant, uncovered on almost every continent on the planet, have been found among those of dinosaurs and show very little evolution over the eons.

Overall, the cycad family is comprised of around 300 varieties. Their natural habitat ranges through Australia, East Africa, Madagascar, Southeast Asia, New Guinea, India, the southern Japanese Islands, Malaysia and the Philippines. The Sago Palm originated in the islands of Ryuku and Satsuma as well as Southern China.

First discovered in the late 1700’s, the latter part of this plant’s Latin name, Revoluta, was given to this species because of the way that the leaflets revolute – curl back.

Though generally said to be a slow grower of only 3-6 inches per year, in tropical environs it grows much faster – with mine seeming to average ten inches or more annually. A mature Sago Palm can grow erect, sturdy trunks attaining a height of as high as twenty feet and up to two feet in diameter. Some may be grown in their natural clumps or kept as a striking singular display. They prefer sun but also do well in partial shade. Water them regularly in sandy, humusy, well-draining soil.

The dark olive-green, feather-like leaves are from four to six feet long, are gracefully arched and grow in a circular fashion. Trunks sometimes branch producing multiple heads of leaves. The rough trunks retain the old leaf bases. The stiff leaflets grow at such an angle from the rachis (the primary stem of a leaf composed of separate and differentiated leaflets) so as to present an attractive, trough shaped leaf. New leaflets emerge from the plant center coiled and as they open are soft and light green. The petiole (stems) bear small protective barbs that I heartily encourage avoiding when pruning.

Like other cycads, the Sago Palm is dioecious, with male and female reproductive cones (the reproductive part of a cycad) being on separate plants. Shaped like a torpedo, male cones protrude. Females are shaped like a cabbage with a color of gold or tan-yellow. The female cone slowly opens up when receptive to pollen but cannot produce viable, fertile seed unless it is pollinated. Naturally, this can happen by wind dispersion of male pollen but is thought that most occurs through native insects. Typically plants will not cone until they are over ten years old.

Seeds take 6-18 months to germinate but there is a better way to propagate them. The Sago produces “baby” offshoots at the base of their trunks. These bud offsets may be cut off – careful to not harm the mother trunk – with a clean, sharp knife and planted. Treat the cut surface of both with a fungicide and some sort of sealing material like tar.

There is significant confusion of this plant with the same named, actual, Sago Palm – Metroxylon sagu, which is in the palm family. This much scarcer plant is found in tropical lowland forest and freshwater swamps across Southeast Asia and New Guinea and is the source of sago flour. It is traditionally cooked and eaten in various forms, such as rolled into balls, mixed with boiling water to form a paste, or as a pancake.

However, the Cycad Sago Palm can be quite poisonous to both humans and animals if ingested. Pets are at particular risk since some seem to find the plant very palatable.

Often expensive to purchase when larger, in California folks have been known to chain their Sago Palms to keep them from being stolen late at night by “tree thieves”! Is nothing sacred? 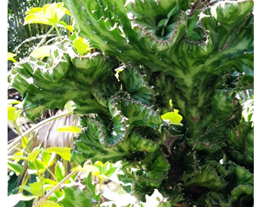 The new book is ready! You can now order Volume II of “The Civilized Jungle”