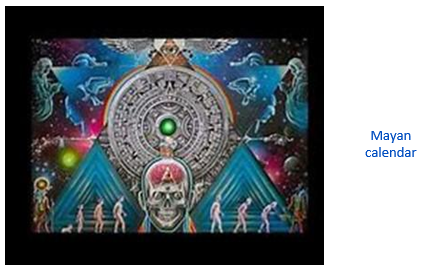 By Kirby Vickery on the January 2021 Edition 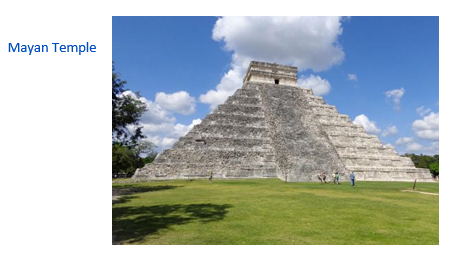 Have you ever taken a step back when either attending (word used which is better than ‘visiting’ or ‘climbing’ or even ‘driving by’) a Mayan temple or ruin and wondered how the ordinary Mayan people lived? I’ve been writing about Mesoamericans cultures for several years now and have covered the mythological end of things pretty well if not just on the surface.

I’ve also written about their social and political stories that have come down from the various codices. The mythological stories center on the (mostly) children’s version of the creation and the discovery of things used like alcohol and chocolate. I understand that these memories were those of the adults, too. But, how did these people live and what were their day to day activities?

In my history classes of years gone by, I tried to give the students a historical reference to help them understand the place in universal history our little stories were taking place. I’ve tried to do the same thing with these articles where a historical reference would settle comfortably in a westerner’s mind. The Mayan Empire ran from about 600BCE to 1564CE when the Aztecs finally took over the failing empire. To say it fairly simply, their individual lives were simple and a little on the hum-drum side. 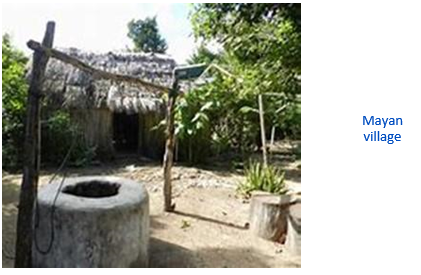 It was a classed society. As with most societies, the family was the center point, which carried the civilization. Unlike some American Indian and Canadian ‘First’ Nations cultures, this society could not be called a Madrigal Society (woman rule). Most of the men were on call for any war that happened with their particular city when not working in the communal agricultural fields or in the semi-trained artifact shops. Then there were the specialists in whatever shops for hardware and construction they had, along with all the other artisans and shop keepers. At the top of the heap were the kings, priests, and scribes.

I wouldn’t call it a blood thirsty society but the ‘needs’ of the gods demanded human sacrifice and still beating hearts held above the donor’s body while he watched it stop beating.

You might think that this was just totally barbaric and you would probably be right from our western man-kind and mod-ern point of view. These people knew nothing outside of their own little worlds and what the priests told them to believe. In most of these Mayan communities, both men and woman would very easily line up and volunteer to be the next slain sacrifice.

They would do this with eagerness and enthusiasm. According to the priests and the teachings, being a sacrifice was an honor and gained a person a privileged position in the afterlife. Sort of a Klingon thing without the forehead thing.

It could be called a humdrum existence except the priests made sure that it wasn’t. Their education to the populous on the needs and demands of the gods was complete and all about public activity. Included in all the ceremonies, with and without sacrifices, were games and celebrated holidays. 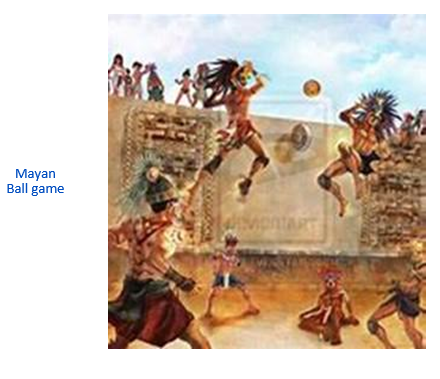 The most famous of all Mayan sports was, of course, the Mayan ball game, played by teams that had a ritualistic status in large ball courts built specifically for this game. However, they also played various other kinds of games such as Tlachtli, Jai Alai and board games like Bul and Patolli.

In the ball games, the teams tried to get a hard rubber ball through a high-placed hole without using their hands or arms.

There were times when the losers were taken out to be sacrificed to the gods. Jai Alai is played today in most of Mexico. It is known to have the fastest ball speeds in the world.

Similar to handball or racquetball, it is played with woven baskets instead of paddles or racquets and the ball must be caught and thrown back against the far wall in one motion. It’s a great gambling sport.

Patolli can be considered an early form of Parchisi. It was played mostly by the upper class and again, gambled upon. Bul was a board game that involved grains and some mathematical computation. Looking at it, I think it was something like the Japanese game of Go or Gomoku. The difference here is that Bul was a warlike game.

The Mayan people had their holidays as well. The two major holidays were The Day of the Dead, celebrated on the first and second day of our November, and the Winter Solstice. Please remember their calendar was a little different than ours. They had eighteen months of twenty days each. 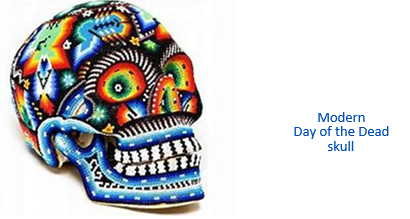 When their Day of the Dead rolled around, they would party. Death, to the Maya, was just a change in life. Their Day of the Dead, known as “Hanal Pixan” (Food of Souls), was a celebration because it was when deceased relatives were allowed or “permitted” to visit loved ones.

Houses were cleaned from top to bottom to prepare for this visitation. The pet dogs were tied up so as not to run the spirits off while others were preparing for the feast. A black ribbon around the right wrist of the children prevented the spirits from taking them.

Tables and the graves of the deceased were covered with candles and flowers. And they would also set an extra plate at the table for the honored dead.

Special food and drink, public dancing, games and partying were the order of the day on the Winter Solstice which occurred on the 21st of December.

Even though we think of the piñata as being a native Mexican party activity, it did not originate in Mexico, as shocking though it might be. Marco Polo brought it to Europe from China in the 14th Century and it was introduced as a fun children’s game in Mexico by the Catholic priests in the 1600s.

The Mayans didn’t have the variety of food that we have but they did have: guacamole, corn tortilla, tamales, Poc Chuc, salsa (yes the tomato is traceable back through the Maya. But they didn’t have the onion. That came out of present day Pakistan. Cochinita pibil, subanik, and South American quinoa were also enjoyed.

Their diet was rich and full and they had more than one kind of strong alcohol beverage to go with it. All of this made for quite a New Year’s celebration. Oh, I should tell you that the end of the world, according to that Mayan calendar, was the first of December last year.

It was actually the end of the Mayan 52 year century that got carried away by some slightly uneducated people. 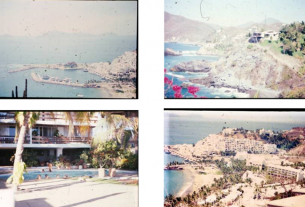 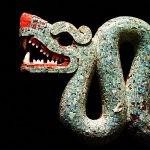