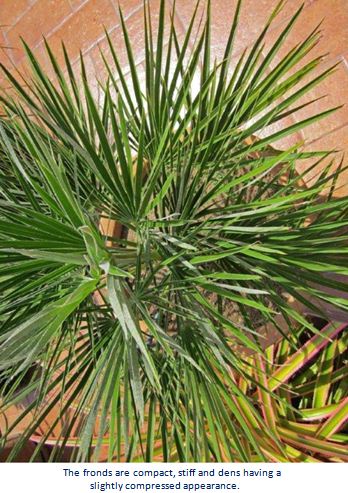 By Tommy Clarkson from the September 2015 Edition

(Fully researching this wonderful palm was quite the challenge as differed are the opinions, experiences and first hand awareness/knowledge of it. But, perseverance prevailed and, finally, we were able to sort fact from fiction and rumor from reality in piecing together the following!) 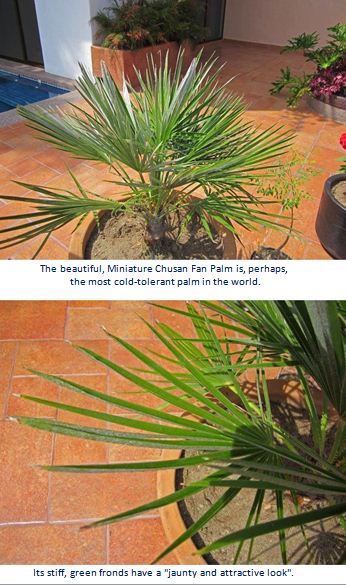 From this family comes, perhaps, the most cold tolerant palm in the world, the beautiful, Miniature Chusan Fan Palm. So tough is it that it’s grown in Great Britain braving without protection the realm’s less than balmy winters, as well as in the U.S. purportedly ranging from Alaska to Alabama . . . though I’ve never seen such growth as this!

In point of fact, its stiff, green fronds are able it to withstand exposed windy locations and I’ve seen pictures of them piled with snow in temperatures as low as zero degrees Fahrenheit (- 17.7 C)! One writer described these fronds as having a “jaunty and attractive look”. There’s certainly worse ways to be described!

A medium-sized palm, the Trachycarpus wagnerianus grows slowly at first, then – after forming a trunk at three to four years of age – it makes up for lost time in maturity, reaching up to 10, 20 and even  I’ve read 30 feet (9.1 meters) in height and a breadth of 1-5 feet (.3 – 1.5 meters). It has a slender, single, brown trunk covered with a thick fibrous material or hairs. This coat is rather reminiscent in appearance to that of the trunk of Old Man Palm (Coccothrinax crinita). Free of this “outer attire”, its trunk can reach a diameter of 8-10 inches (20.3 – 25.4 cm).

Similar to its well-known relative the Windmill – or Chusan – Palm (Trachycarpus fortunei), the Trachycarpus wagnerianus fronds are more compact, stiff and denser having a slightly more compressed appearance. This particular compactness is, in part, what seems to make them so tolerant of exposed windy conditions and able to better bear the weight of snow and ice.

As to overall appearance differences the T. fortunei has the visual look of being more dainty and leggie. The Wagnerianus palm fronds are rather small, being around two feet (.6 meter) in diameter. They are borne on two to three foot (.6 – .9 meter) petioles which also add to the overall palm’s more compact look.

The leaves of younger Miniature Chusan Palm are nearly circular, but as it ages they assume a more hemispherical configuration. The forty or so on each palm are thick and leathery with the blade (the expanded part of the frond whole) somewhat cupped. While rather rare, once in a long while, one might observe a “petticoat” of old leaves consisting of scores – if not hundreds – of old dead leaves hanging down on the trunk. These are much more commonly seen on such as the Mexican Fan Palm (Washingtonia vilifera).

Its flowers are small, yellow and dioecious – male and female flowers on separate plants. Its non-edible fruits are oblong in shape and turn purple-black when ripe.

When a juvenile if in enough light it can be used and enjoyed indoors. Overall, it prefers a partial sun to 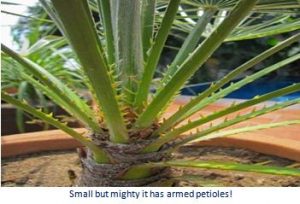 As yet more of its “positives” are the facts that the Miniature Chusan Palm has an excellent root system, transplants quite easily, is disease free, highly adaptable for containers as a specimen plant and one of the best options for coastal planting.

During growing season a bit longer here than “up north” – the Trachycarpus wagnerianus will thank you for monthly fertilization. Thachycrpus, the genus name, is derived from two Greek words that mean “rough” and “fruit”. In turn, forming the remining epithet for this palm’s name, wagnerianus, is a Latinized form of a German horticulturist’s whose last name was Wagner and who was the first European to import these in the late 19th century.

The rather striking in appearance Miniature Chusan Palm can provide even the drabbest of garden corners with an exotic feel. But, alas, it is not well suited for hot climates where the nighttime temperature remains consistently high.