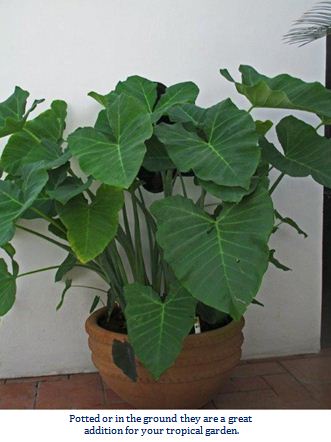 By Tommy Clarkson from the October 2015 Edition 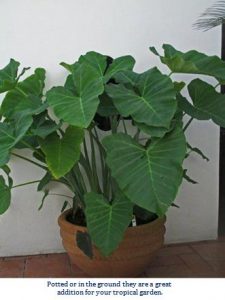 (Also known as the Arrowleaf, Yautia, or Malanga)

You see, there’s the Arrow Leaf Elephant Ear look-alike doppelganger, Taro (Colocasia esculenta), from the IndoMalayan region of Southeast Asia and then, in the New World, there’s Capote (Xanthosoma robustum) from Tropical America. Then there’s the up to twelve feet (3.65 meters) tall Giant Taro (Alocasia macrorrhiza) from India. Beyond that is the entire Alocasia genus of nearly eighty species of broad-leaved rhizomatous or tuberous perennials – whose origin ranges from tropical and subtropical Asia down into Eastern Australia many of which have elephant ear shaped/sized leaves! 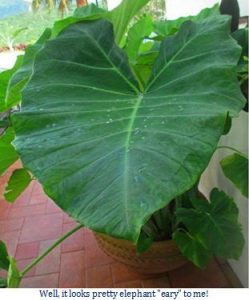 Suffice it to say that “Elephant Ear” is a term applied to several groups of plants which includes an array of beauties in the Alocasia, Philodendron, Anthurium, Colocasia, Xanthosoma, and Caladium families.

Depending upon who one wishes to believe, this particular species, Xanthosoma sagittifolium, originated in the West Indies, Central America or Southern America. Regardless of where it actually started, it can now be found growing throughout the tropics of the Americas. And well it grows indeed, as in the right environs it can reach the stunning height of a real elephant’s ear nine feet (2.74 meters).

This rather spectacular, stout, fast growing, clumping and quite good looking – perennial herb is called an elephant ear as a result of the obvious. One look at the slightly floppy, sagittate (arrowhead shaped) leaves of up to six feet (1.82 meters) fast explains from whence its name was derived.

The big thick and leathery leaves, at the end of stout, dark colored stems are light green and arrow-shaped. These produce underground tubers, called corms. These are formed with a cluster of grayish brown to black cormels that look much like an elephant sized gladiola bulb.

As earlier mentioned, it is quite similar in appearance to taro. Both are found in bogs, swamps and along 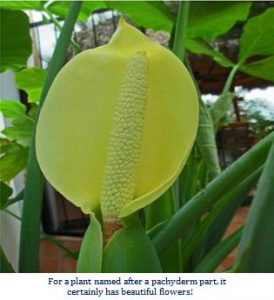 streams. Each has long petioles and wavy margins. The taro is shorter around four feet (1.21 meters) at its maximum and its leaves are a dark green whereas the Arrow Leaf Elephant Ear is a lighter shade of green with long petioles (leaf stalks).

Like Taro, the genus Xanthosoma produces an edible, starchy tuber. The harvested and then peeled tubers can be kept at room temperature (76° F. or 24.4 C.) for several weeks but if refrigerated kept much longer. In Central and South America the corm is grilled, fried, barbequed, baked whole (like yams or potatoes) or used as a puree’ in stews and soups.
The root can also be milled into flour. Young leaves can be eaten like spinach. It’s a very hypoallergenic food and high in calories.

But a warning is in order. Don’t merely dig one up and start gnawing away! It must be cooked correctly prior to eating as any part consumed raw or improperly prepared can cause some serious problems. It contains Calcium oxalate that can numb and swell the tongue and pharynx resulting in breathing difficulties and serious throat pain.

Beyond that, some warn that the leaf sap may cause skin irritation though I have never experienced such. Unlike Tare, my childhood dog, this striking plant does not care to have its ears flapping in the breeze. Often found under the humid, rain forest canopy, it prefers a somewhat dappled shade and sun combination but if watered regularly, it can tolerate full sun. It has nightmares of Pythium Rot and Rhizocotonia Rot. As to where it secures its roots, it prefers rich, organic, well-drained soils, in warm, humid climes, with organic fertilizers and lots of composted material requiring tall containers if not grown directly in the ground. If you wish to successfully grow Arrow Leaf Elephant ear, just remember the expression that “more water and more nutrients means more planta”.

Colocasia will continually produce new leaves as the older leaves continually die off. Periodically remove the dead leaves in order to prevent the leaves from covering ground-cover plants. Well attended, the underground tubers spread rapidly and the plant can be easily propagated by transplanting the separated shoot. In fact, it grows so well and fast, in Florida it is considered an invasive plant. But not in my gardens  here they’re part of the family! 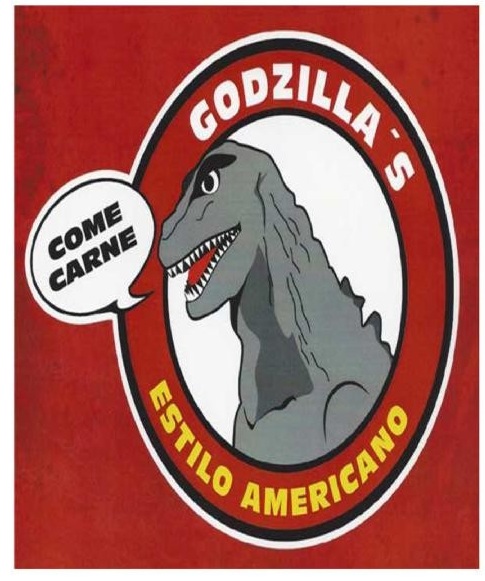 Tommy’s Tummy, A Night Out