By Tommy Clarkson from the February 2017 Edition 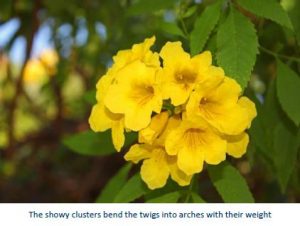 (Sometimes I embarrass myself so much that I think I should go back to the insect collection of my 4H project youth! Such is the case with the Yellow Bells. Upon spying this beauty and deciding to write about it, I jumped to the conclusion that it was a  very similar in appearance Golden Trumpet Tree Tabebuia chrysantha  that had somehow gotten its flowering seasons mixed up. Wrong, wrong, wrong, Bug Breath!)

Bailing me out as he has done on numerous occasions was my pal, Dr. Mark Olson, of the Institute of Biology at the University of Mexico. He, you may recall, kindly wrote the Foreword for The Civilized Jungle, Volume I. Along with his equally intelligent, PhDed (if that’s not a word it should be) botanist wife, this globe-trotting, internationally known, plant professional shot me a note, while “in the field Down Under”, setting me straight. 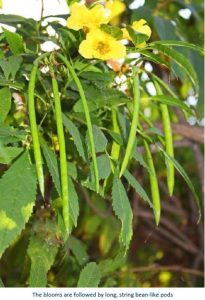 Next, taking these pictures for me was my buddy, Nathan. So all I’d contributed, up to that point, was identifying it incorrectly! But, Golden Trumpet Yellow Bells . . . . I’m get-ting older, you can see how I’d get confused, right? That’s my story and I’m sticking with it!

But, so as to keep you from repeating my great and galling, geriatric gaffe, allow me to describe these attractive trees in a bit of detail. To start with, they are an evergreen zone ten and eleven full-sun loving, large bush to small tree, growing in the United States, Mexico to northern Venezuela and Argentina. And yes, some folks in the cooler climes enjoy them year round as they can be grown in pots/containers outside during warm weather and then overwintered indoors as a houseplant in a bright, sunny room. In the former mode, they have no serious insect or disease problems. But indoors, keep a watchful eye out for spider mites and whiteflies.

Beyond that, I could not say it better than is written in the Floridata Plant Encyclopedia, as follows: The Yellow Bells have “bright green opposite leaves, which are pinnately compound with one to nine (usually three to seven) sharply-pointed, oval leaflets. The two to three inch (5-7.6 cm) long leaflets have sharply toothed edges. They are borne on very short petioles and are slightly hairy on the undersides along the midrib and in the vein axils. The smooth, squarish twigs are green, turning tan or reddish tan as they age. The bark on the main trunk is light brown and becomes corky with age. The one to two inch (2.5-5.1 cm) sunshine yellow flowers are trumpet shaped. 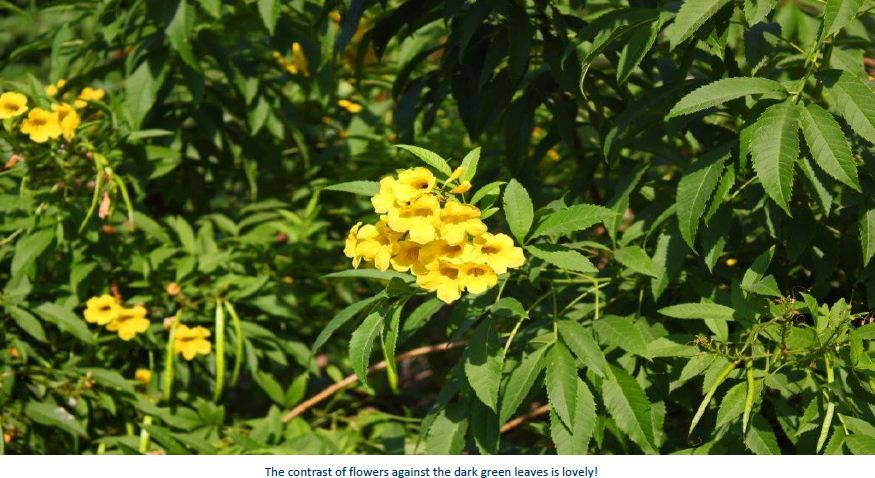 They hang in showy clusters at the branch tips and forks, bending the twigs into arches with their weight. There are two folds along the bottom of the flower’s throat and several delicate rust-red lines decorating the interior. The blooms appear in flushes throughout the growing season. They are followed by four to eight inch (10.2-20.3 cm) long, string bean-like pods that hang in vertical clusters. These turn brown and split open to release flat, oblong one quarter inch (0.6 cm) seeds with transparent one quarter inch (0.6 cm) wings on each end.”

According to the National Gardening Association’s Plant Data-base, it is both humidity and drought tolerant but, on the other hand, likes mesic soil. (What, one asks, is that? Well, ecologically speaking, such is “a habitat with a moderate or well-balanced supply of moisture”.)

(By the way, worry not, the preceding two paragraphs of good – but somewhat tediously-detailed – data, is not on the test!) You may wish to remember only that it has delightfully, bright yellow, trumpet-shaped flowers displayed in terminal clusters and growing from fifteen to twenty feet (4.57 – 6.10 meters) in height.

Beyond we moderately sentient humanoids, the Yellow Bells flowers are enjoyed by butterflies, nectar-seeking insects, bees and hummingbirds. Small mammals eat its seeds, while some creatures browse on the plant’s leaves. However, not all are favorably inclined to the Yellow Bells. In South Africa, it is considered an invasive species. But, it is the official flower of the Virgin Islands!
* Speaking of Esperanza, she and her husband John are our wonderful friends and next door neighbors here atop the ridge above Santiago Bay. Their restaurant, Juanito’s, is a “must go to” place here in Manzanillo!

“Some of our writers Reminisce”