By Tommy Clarkson from the August 2015 Edition 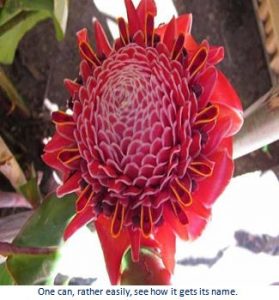 First, a couple of culinary facts that you might not expect to find at the outset of an article written about such a beautiful flower. Its stems can be chopped up and added to curries or soups along with rice noodles and the unopened flower buds are flavorfully edible.
Now, out of the kitchen and on to some relevant botanical stuff!

Like numerous tropical plants and a few lost souls I’ve known over the course of my life – it’s stumbled around trying to find its own unique and specific identity. It’s struggled through a variety of different names to include Phaeomeria magnifica, Phaeomeria speciosa, Nicolaia elatior, that by which it is known today, Etlingera elatior, and the ever so popular, Juanita Blitzworth . . . OK, I made that last one up to see if you were paying attention! 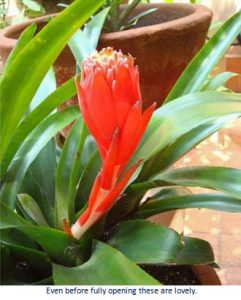 The Torch Ginger originally grew in Melesia that biogeographical region that incorporates IndoMalaysia and Australia – with some authorities reporting that due to overharvesting, it is no longer found in the wilds of Malaysia.

Elsewhere, however, according to the “Invasive Species Compendium” which (beyond its presently preferred scientific nomenclature, lists it with twenty different scientific names) states that the Torch

Ginger “is included in the “Global Compendium of Weeds” where it is listed as invasive in China, Costa Rica and Hawaii . . . spreads by seeds and by rhizome division, has the potential to grow forming dense thickets principally in moist habitats (and) is able to grow in shaded areas beneath the canopy of mature forests, and in the Pacific wet forests of Costa Rica is invading relatively unaltered native forests.”

Is this a maniacally out of control plant beast growing amuck, similar to that from “The Little Shop of 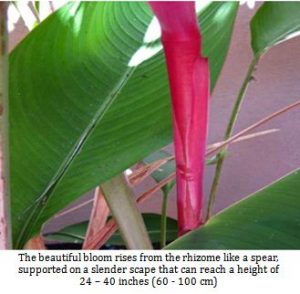 Horrors”, or simply a misunderstood beauty like some sexy stunner from the Silver Screen?

Regardless, its exceptional inflorescences of pink, red and a rare white variety come up directly out of the ground, as opposed to being on a terminal spike. They rise from the rhizome like a spear, supported on a slender scape that can reach a height of 24 – 40 inches (60 – 100 cm). Upon attainment of its ultimate height, the outer protective bracts open to form the ‘rim’ of the burning torch. Inside is revealed a central, pinecone-like structure of many small, waxy, densely packed bracts that form the ‘flame’. The individual true flowers appear from between the bracts found on the pinecone-like part.

When not in bloom, the varieties cannot be easily differentiated by simple perusal of their aerial parts as all are similar in appearance. But it might be noted that there is a torch ginger variety that produces red inflorescences with purplish red leaf undersides and whose leafy shoots take on a similar reddish tinge. Generally speaking, the pink variety is the most floriferous followed by the red and not often seen white varieties.

The leaves, on the looming stalks above, are two to three feet long and lanceolate ya’ think we should call them Sir? (Groan!).

Following pollination, a fruiting head, looking somewhat like a club with numerous round bumps, forms. These are actually the individual fruits (berries). At first green, they and turn red when ripe. Small, dark-colored seeds can be harvested from them.

In “traditional medicine”, it is believed that daily intake of the raw Torch Ginger inflorescence can reduce diabetes and hypertension. Beyond that probably in the “way too much information” category in 2011, the “International Food Research Journal” reported that the inflorescence, consumed along with bitter leaves (Vernonia amygdalina), is believed to relieve flatulence in postpartum women. (Can you believe the diverse array of totally useless information one can sometimes glean from these articles?)

One possible problem when growing Etlingera elatior plants can be a potassium deficiency. Potassium is important for the correct uptake of water, which is necessary for the Torch Ginger’s optimal growth. To avoid this problem, simply add potassium to the soil before planting, working it into unplanted beds to about a foot deep.

The Torch Ginger thrive in moist, organically rich and well-draining soil in full to partial shade with protection from the wind and, like most of the Etlingera genus, prefer disturbed areas . . . . and with me being about as disturbed as one can get, it’s no wonder they do well here!

How Our Rising USD Affects Your Investments 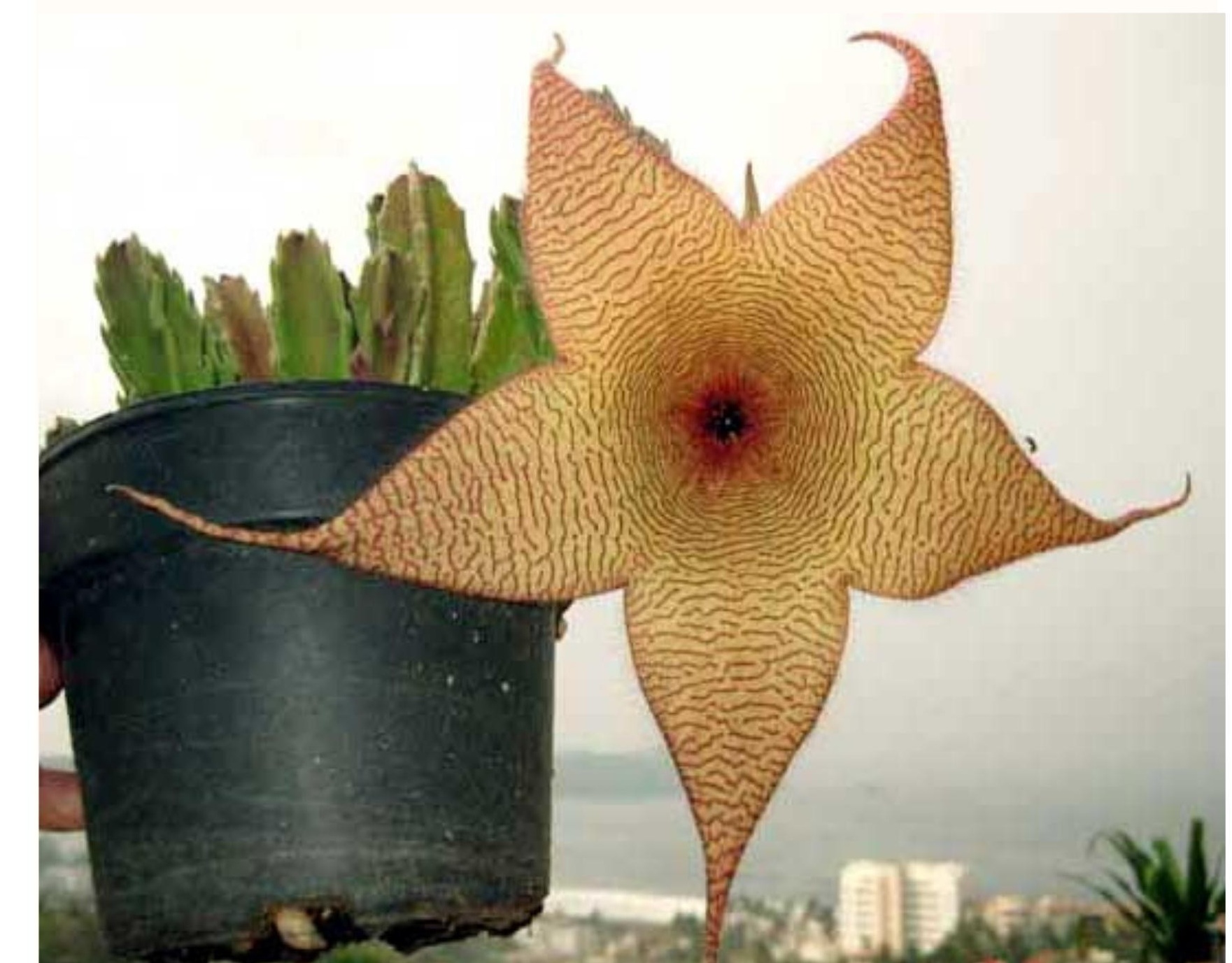