By Tommy Clarkson from the January 2011 Edition 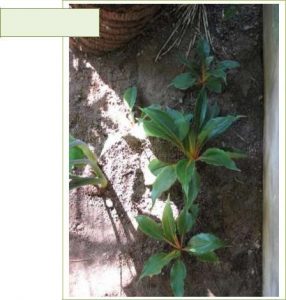 Introduced to the Americas not much more than a decade ago, this perennial foliage plant, native to the rainforests of East Africa in the Usambara Mountains of Tanzania, is fast becoming a favorite for both indoor and outdoor use. But take note: It does require substantive shade.

So new is it to this side of the Atlantic that as seen above there is significant confusion as to its Latin name, family and even the name by which it is commonly called. In fact, few of the presently published books on landscape plants include this gem in their texts.

We do know that it’s a colorful relative to the Spider Plant and, while it forms no runners, it seeds itself most prolifically. If you choose to plant these seeds don’t be worried if only a few sprout as they, generally, have a very low germination rate.
Regardless of the confusion as to where it fits in the plant world and its best ‘moniker’, it is a most intriguing plant and one I was delighted to recently find. It has a shiny rosette of dark green pointed 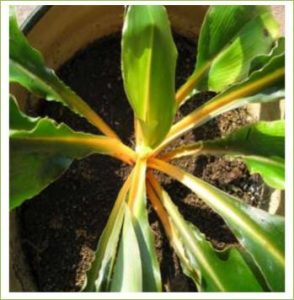 leaves and a heart of glowing pink to coral orange from the base of the leaf up through the petioles (that’s the stem connecting the leaf to the stalk) and leaf midribs. These leaves 25-30 cm long (app. 10”) and 5-10 cm wide (2-4”) – are rubbery yet brittle. (For the brightest colors, remove basal sprouts, as they appear, to avoid crowding which can hide the colored growth.)

There are but a few “down sides” to this plant. One is that you must be aware that the petioles are brittle and can be broken easily. As a result of this, they are not good plants for high-traffic areas. Beyond that, the old flower stalks go black and become unsightly, requiring removal. Lastly, any leaf tear or petiole break will develop black marks around the injury.

Multi-functional, it can be used as a potted plant, ground cover, mixed with others or highlighted as a showcase specimen. And, because of its great tolerance for low light and its resistance to disease it is a great indoor houseplant.

The Fire Flash foliage (nice alliteration there!) is extremely sensitive to chemicals, pesticides, insecticides and high light levels. Thus as regards the latter it logically follows that it should not be placed in the full sun as intense light levels will cause chlorosis or scorching. It prefers shady filtered or dappled sun. One of ours is on our dining palapa with only indirect sun while others are ground foliage well ensconced in the shade beneath multi-fronded palms.

Considering its native environs it follows that it prefers a humid environment. Though it is quite drought tolerant

what with its root system consisting of swollen water-storing nodules there is dispute about how much and when to water this plant. Some say to let it become fairly dry before watering. Others advise to keep the soil moist

but not over water. I damply lean to the former.

Ground planted, at maturity, its height will be 45-60 cm (18-24”) but generally shorter if container-grown. The flowers  borne in groups – are about one centimeter (1/2”) in diameter, white, have six petals and last only one day. But even with this short bloom time, the plant itself is a “glowing beauty!”

Cutting to the chase, this is a good, flexible to use, plant. So, I encourage that you get one soon! 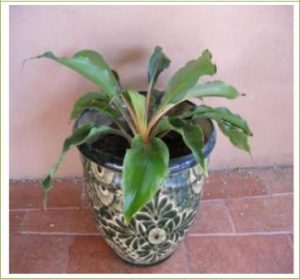 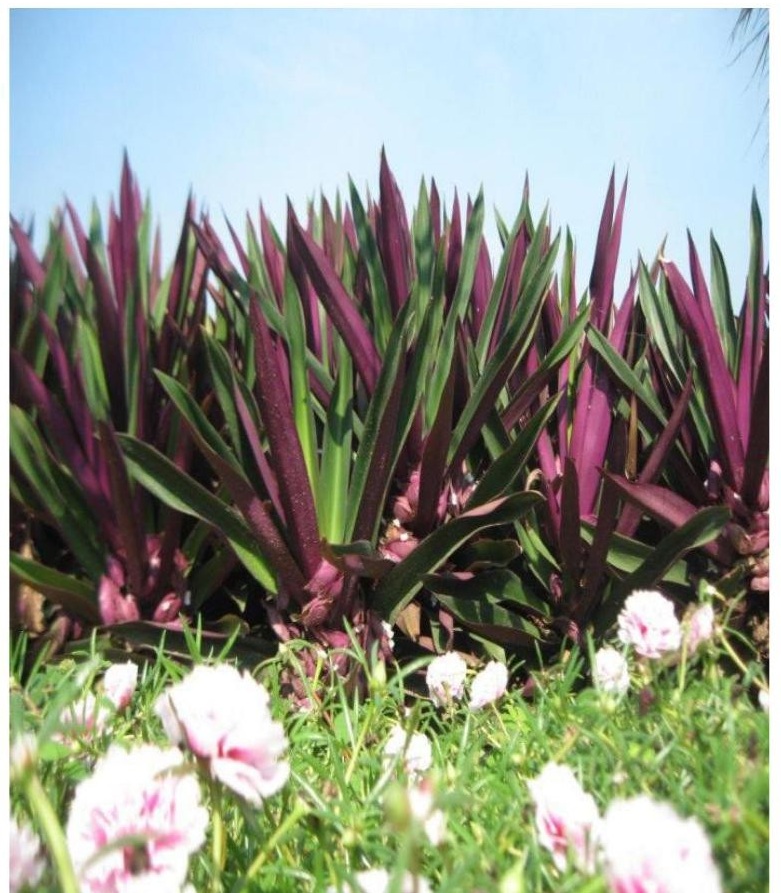 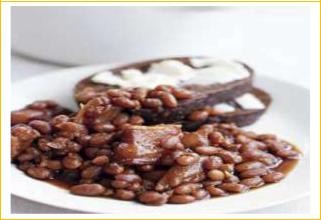