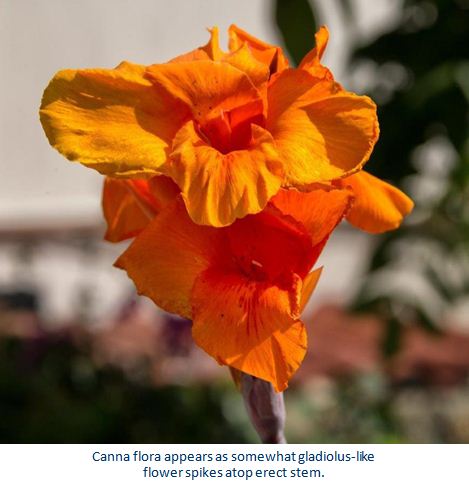 By Tommy Clarkson from the September 2016 Edition

(Call me an opinionated old grump, but for whatever reason, I canna’ I know, that was bad form much 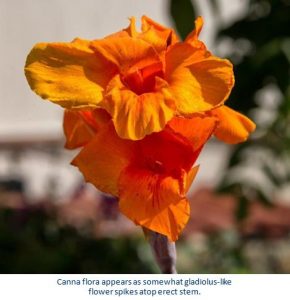 of an affinity for these plants. They’re colorful, easy to grow and great for those that have a small growing area. But they just fail to trip my botanical trigger! So simply ignore my obstinacy and decide for yourself if these Tropical American originals are what might meet your needs.)

The word Canna is used similarly as to how Heliconia, Ginger, Rose, Tulip or Palm might be as an overall designation for a variety of different plants. Canna is actual a genus comprised of nineteen different core species and over 2,000 cultivars whose flora appears as gladiolus like flower spikes atop erect stems in red, orange, yellows, pink, cream and bicolors.

(For a tiny “taste” of these varieties, here are a few of those cutivars: ‘Ace of Spades’, red; ‘Annjee’, mottled pink and gold; ‘Camille Bernardin’, salmon over apricot atop blue-green foliage; ‘Cleopatra’ orange over yellow though, sometimes, a red petal or complete stem of red flowers; 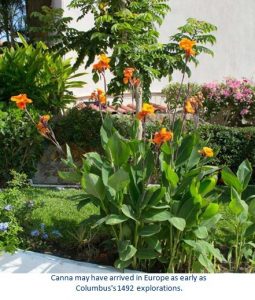 All original Canna species are native to the semi-tropics and tropics of North and South America, ranging from South Carolina, through the Caribbean islands, to Argentina, thriving in damp shady locales.

Because their rhizomes contain a high-quality starch, for over 4,000 years, Canna has been cultivated by various Central and South American cultures. West of there a ways, in Viet Nam, this starch (called achira) is used to make “cellophane” noodles.

This plant has some other, rather unique, uses as well. Its brown or black seeds are round, pea-sized and exceptionally hard. Accordingly, they have been used as shotgun pellets in India; as beads in jewelry, rosaries, baby rattles and musical instruments; in making a purple dye; its fibers are used to make both jute and paper; as well as being employed in removal of toxic waste from pig waste and excess fertilizer and insecticides from runoff.

Canna may have arrived in Europe as early as Columbus’s 1492 explorations. Though cultivated in European gardens in the 1570s, they only attained popularity in the late 1800s.

Many of those cultivars were lost when European gardeners stopped growing them during World Wars I and II. But in the 1950s, Cannas began making a comeback.

As long as these Rhizomatous perennials have lots of sunshine, fertile, moist soil and regular watering, they’re happy. (Keep this in mind when the seasonal rains stop!) So much do they like water that they can handle bog like conditions very well. Besides this moisture need, I encourage you to ensure that their soil also be rich in organic matter. 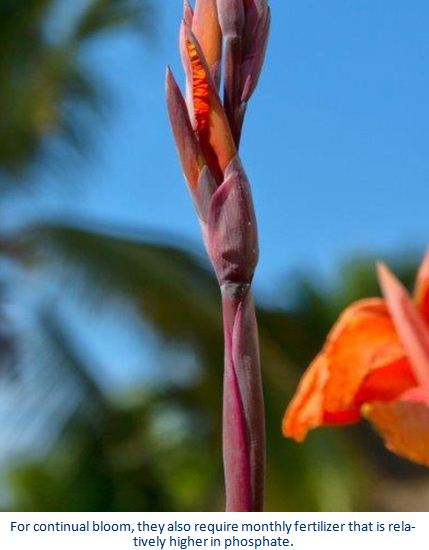 leaves with green or bronze sheathing leafstalks that are solid, striped or variegated.

Beyond these preliminary actions, water them thoroughly and keep a thin layer of mulch around them to help retain moisture as well. For continual bloom, they also require monthly fertilizer that is relatively higher in phosphate.

If you need to, stake the taller varieties; as flowers fade, dead head to promote continued flowering; cut each stem to ground after it has bloomed.

Let Cannas grow, without moving them, until the clumps grow very matted – perhaps every three to four years  then dig up the clumps, separate the roots, and replant.

Natural nasties, as far as Canna are concerned, include slugs, snails, spider mites, Japanese Beetles and caterpillars on the in-sect side. Rust, fungal leaf spot, and bacterial blight are common as well. Also, bean yellow mosaic and tomato spotted wilt viruses can occur. Lastly keep a mindful watch for Astor Yellows, the chronic, systemic plant disease caused by that scuzzy bacterium like organism called a phytoplasma.

At the movies – In the heart of the sea

Welcome to Ajuchillan the Place of Comals