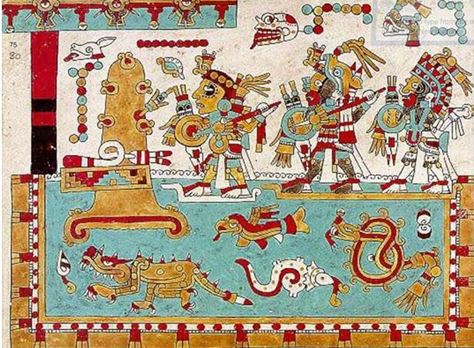 Treasures of Mexico: The Mixtec, Aztec and Maya Codices that Survived the Conquistadors 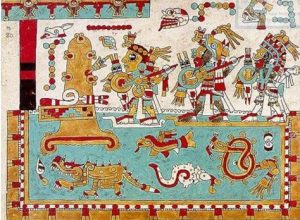 When Europeans arrived in the New World, they did not only kill people with war, slavery and disease, they also attempted to destroy the cultures of the native peoples. Among so many cultural tragedies, one stands out in Mexico: the burning of ancient manuscripts illustrated and written before and shortly after the Spanish invaded.

The Mexican codices, as they are called, are richly illustrated texts that provide a window into the life, history, religion, and culture of Mexico, before and after the Spanish invasion that began in 1521. Only about two dozen preSpanish codices survived the tragedy of the book-burning. Several others survive from after the invasion. The University of Arizona Library web-site says Mexican rulers also destroyed some manuscripts.

The books were written and illustrated mostly by Mixtec, Aztec and Maya people and go back as far as 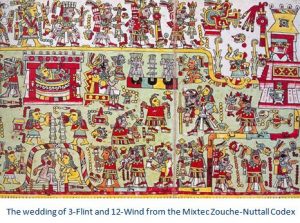 629 AD, through to 1642 AD. The  Mixtec  codices  that survived are mostly preSpanish, while the Aztec manuscripts display influence of European culture. Only four Mayan codices survive, all pre-1521 AD. The Mexican codices are made of long strips of deer hide, cotton cloth or bark paper. Some of them have wooden covers. PreSpanish codices fold like accordions, showing images on both sides of the folio. If the manuscript was meant to displayed against a wall, the artists painted just one side. 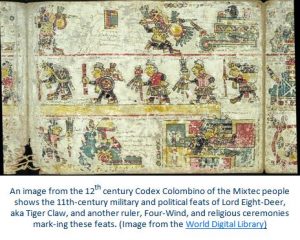 “Some preConquest Mixtec codices contain genealogical tables of their rulers from the birth of 4 Alligator, the first Lord of Ti-lantoga in the eighth century, to the last cacique in 1580.

Births, marriages and deaths of their lords and rulers, as well as wars, conquests, religious ceremonies and feasts are the most important events represented in these genealogical and historical manuscripts. One does not find scenes from Mixtec everyday life; the focus is on the life and deeds of rulers,” says the University of Arizona Library.

Mixtec codices include the Zouche-Nuttall, Vindobonensis, Bodley, Selden , Egerton, Columbinus, and Becker I. According to the University of Arizona Library, the Mixtec codices were not primarily intended as historical texts to pass on knowledge to subsequent generations, but rather were histories as mnemonic devices to help in oral recitation.

Other codices of the central highlands of Mexico and the Mixtec Oaxaca region, called the Borgia group, 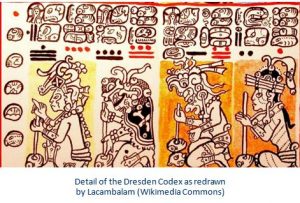 are neither Mixtec nor Aztec and are about ritual beliefs in the 260-day ritual calendar. They include the Borgia, Laud, Cospi, and Fejérváry Mayer codices.

Just four Mayan books survived the book-burning by Francis can missionaries. They are the Codex Dresdensis, the Codex Tro Cortesianus (Madrid Codex), the Codex Peresianus (Paris Codex), and the Grolier Codex. “None of these remaining Mayan codices record any type of history or chronicles, they instead contain astronomy, divination, rituals and calendars,” says the University of Arizona website. All four of the Mayan codices possibly date to before the arrival of the Spanish, but the date of the TroCortesianus has been questioned in recent years because European paper and writing are between two sheets of bark. 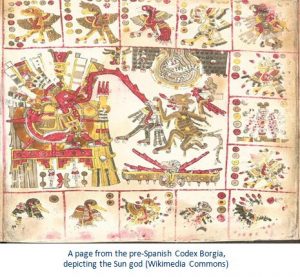 The World Digital Library says the Dresden Codex of the Maya people has figures, numerals and hieroglyphs of divination and ritual calendars, calculations of celestial bodies, instructions for new year ceremonies and descriptions of locations of the god of rain. Mexican codices from the colonial era include the Mendoza, Matrícula de Tributos, Borbonicus, Azcatitlan, Vaticanus A, and Xicotepec codices.

“Aztec codices were less pictorially complex than Mixtec manuscripts, even though the Aztecs had learned bookmaking from the Mixtecs. No original Aztec manuscript has survived that does not show European influence.” 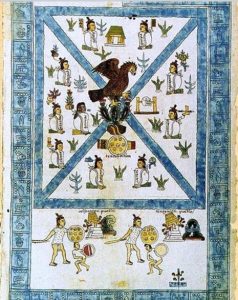 “The Codex Borbonicus is thought to be the only one whose style matches the preConquest Náhuatl style, nevertheless it is considered to be a colonial copy,” writes the University of Arizona Library. “Aztec codices were burned by the Spaniards for their pagan religious content, and by Aztec kings in an effort to rewrite their history. The codices dealt with divination, ceremonies, the ritual calendar, and speculations about the gods and the universe.”

Welcome to Ajuchillan the Place of Comals