By Terry Sovil from the March 2012 Edition 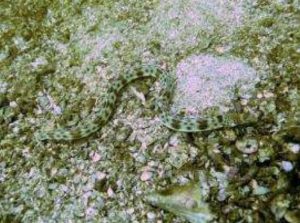 This eel features a tan head and body with large red-brown darkish saddles across the back. They have a conical overhanging snout. Notice tiny pectoral fins, no larger than diameter of eye. They range from being seen occasionally in the Gulf of California and central Pacific Coast of Baja to Panama. They are solitary and often burrow into gravel and rocky rubble mixed with sand and move beneath the surface, occasionally resting with heads exposed. They are wary and will generally bury beneath the surface when approached. Occasionally they will allow a close approach. They range in size from 1 ½ to 2 feet with a maximum of 2 ½ feet. 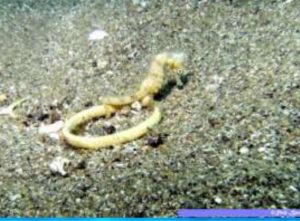 Seahorse (Pacific)
These magnificent fish are found at depths from 10-60 feet they have numerous fine, light and dark line markings radiating from their eye and on the body. They are occasional (but rarely observed) in the Gulf of California and Pacific Coast of Baja down to Panama. This is the only seahorse in the eastern Pacific. They tend to ignore divers, but move away when approached. If you spot one they will allow a close approach and rarely move, but tuck their heads and turn away.

They are from the family of Pipefishes and Seahorses. Their colors are highly variable but include shades of gray, brown, yellow, red and gold. They are solitary. They curl their tail around braches of gorgonians and black coral trees, camouflaging within their branches. Occasionally float free or lie on the bottom. They grow from 4” to 8” with a maximum of 12”. 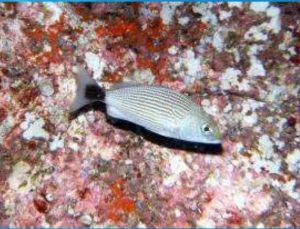 Spottail Grunt
The Spottail Grunt is common in the Gulf of California and the southern Pacific Coast of Baja down to Ecuador. They typically form large aggregations but can be seen solitary. They inhabit rocky and coral reefs. Aggregations often drift in grottos and other protected areas of the reef. They appear unconcerned with divers; usually make a slow and non-threatening approach to get closer. They range in depths from 5′ to 100′. They are from the family of Grunts. These fish feature white scale centers form narrow horizontal stripes. They have a dark patch on their tail base. They look similar to Latin and Cortez Grunts. Coloring is gray to brownish gray. They grow from 6 to 10″ with a maximum of 12″. 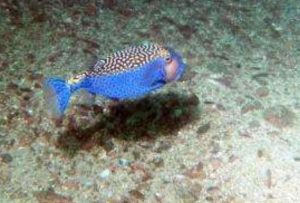 Spotted Boxfish
The Spotted Boxfish have a box-like exoskeleton. Males often display a gold band between eyes; they have black to reddish brown or gold; no spots on head. Females are navy blue to black. They are uncommon on mainland Mexico. They are solitary or in pairs. They generally lurk in shaded, protective recesses in rocky reefs, boulder-strewn slopes and along walls. Around divers they are shy and retreat to protective recesses when approached. Often they will return to peer out where they can be more closely observed.

They are from the family of Boxfishes and feature gold and/or dark spots on blue sides. They also have bright white spots on their back. The female has white spots that cover head and body. They grow in size from 4 to 6″ and a maximum of 7″. 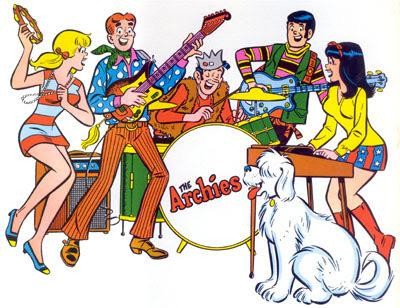