By Terry Sovil from the August 2011 Edition

The Barred Serrano is found at depths from 20 feet to 200 feet. They have pale shades of brown to gray on their upper body, with a whitish lower body; darkish spots on dorsal and tail fins. They can be found from the Gulf of California and central Pacific Coast of Baja to Panama. They are solitary or form small groups that inhabit areas of sand and mixed rubble. They tend to ignore divers but will keep their distance and tend to retreat when approached. They are from the family of Sea Basses. The juveniles have a dusky stripe from head to upper tail base. Adults see the stripe fading and faint bars appear. They grow to a length of 3-5 inches with a maximum of 7 inches.

Beau Brummell Damselfish are a very distinctive damselfish that are frequently seen in Manzanillo waters. Sporting shades of brown to gray with yellowish translucent pectoral fins. Frequently they are seen with scattered blue spots on their head, especially for the young adults, with narrow dark borders around the scales. The juveniles have a dark spot with bright blue border on upper tail base. These fish are from the family of Damselfishes. They live in depths

These fish are common along the Pacific Coast of the mainland of Mexico to Panama. They are solitary; inhabit rocky and coral reefs and rocky shorelines. Strongly territorial they will aggressively attempt to chase away all intruders including divers.

They grow from 2 ½” to 4 ½” with a maximum size of 6″. There are no cautions for divers but it is not uncommon for damselfish to nip at an ear or a hand to protect their territory.

These rays are common on many dive sites in Manzanillo. They are easily identified by the large bull’s-eye marking on the center of their back. They are from the family of Electric Rays. Their features include being tan to light brown with a darkish snout; covered with small black spots and a number of black and gold

to yellowish irregular markings; on rare occasions they lack all markings except the bull’s eye. Two large rounded dorsal fins behind the disc are on the rear body with a rounded paddle-like tail. The rays are occasional visitors from central and southern Gulf of California and southern Pacific Coast of Baja to Panama; also south to northern Peru and Malpelo Island. They are solitary, rest or partially bury on sand and rubble bottoms. They tend to be inactive during the day; forage at night by “hopping” about on ventral fins (located just behind disc). They appear unconcerned if approached by divers and do not move unless molested. Their size ranges from 5-8 inches reaching a maximum of 10 inches including their tail. If touched, these electric rays can deliver a mild (14-37 volt) electric shock 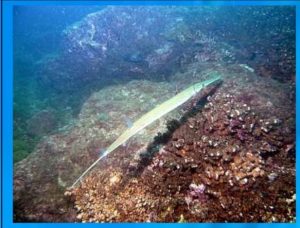 Found at depths from 0-80 feet they are long, have a thin head and body with a long tail filament. Their mouths are small. They are solitary or hover in polarized schools. Alternately they hover and swim above rocky reefs and boulder-strewn slopes and sometimes just below the surface. They tend to ignore divers, but move away when approached. Occasionally they are curious and approach motionless divers. They are from the family of Cornet fishes. They feature silvery blue to blue-green to green tints on their back. They have a silvery white underbelly. They have two thin blue stripes on their back and side. They are common in the Gulf of California and southern Pacific Coast of Baja to Panama. Most grow from 1-1 ½” to 3” and some to a maximum of 4”.