By Tommy Clarkson from the August 2016 Edition 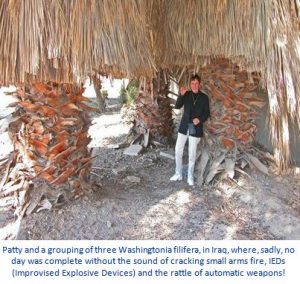 This “feller” has a special place in our hearts.

While working in Iraq for nearly two years (2005 – 2006) I had the opportunity to travel around the country extensively. Throughout these numerous sojourns (sometimes quite memorable, for a variety of reasons to include snipers, improvised explosive devices and a wild car chase with “bad guys” wielding automatic weapons) I came upon only three small groupings of this substantive palmate. Three thrived in one and a small number were in the other two locations. Quite apparently, these were significantly different from the array of pinnate Date Palm varieties which grew in proliferation. Initial research showed no such palm as endemic to the area. 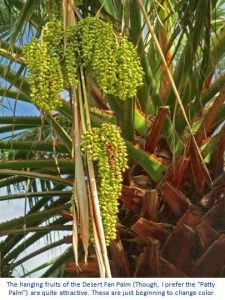 Accordingly, sensing I might have come upon a heretofore unknown Old World Washingtonia variety, with outright glee, I collected some of their seeds. (Now after losing three to the blasted Palm Borer Beetle which found them to be particularly tasty three survive in Ola Brisa Gardens.)

Ongoing efforts, via carefully combing through my scores of tropical botanical tomes, continued to indicate such palms weren’t known to be native to the area. Communications with acquaintances in the International Palm Society confirmed that a (very) few others had also noticed this species in the Arabian Peninsula. Soon, visions of being able to name a new species grew, exponentially, in my near delirious excitement!

As my “bride” was with me there, working nearby in those com-bat zone environs, and I’d managed to get a picture of her amid the grouping of three, I thought these should be named after her Patty Palms. Its Latin name would be, of course, Wahingtonia Clarksonia. This all was pretty heady stuff!

During the course of several years after our retirement, I continued this search for identification and full 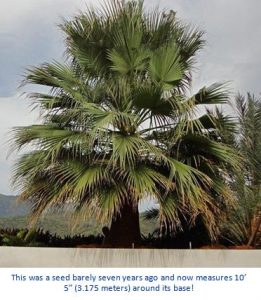 clarification of ori-gin of this huge trunked beauty. Over the next couple of years, two short-term consultancies took me back to Iraq where I again visited these palm groupings and sought answers to my questions of their origin. Then, after my final return to our home here in Manzanillo, I happened upon a text that had previously eluded me and contained data which burst my bubble!

It stated that the Washingtonia filifera survives quite well in the Arabian Peninsula and several are known to have been successfully planted and grown there! “Rats, blast and shucky darn!”

Now I’m not a complete boob and was intimately familiar with the Desert Fan Palm but had convinced myself that these were different. . . . . Wrong!

Actually when not being secreted off to exotic places like Iraq the preponderance of Washingtonia filiferas are indigenous to southern California down into the Mexican Baja and in western Arizona . . . growing conditions very similar to those around mine found just over 10,000 kilometers east of these normal “home grounds”.

(For the differences between this and the Mexican Fan Palm (W. robusta), the only other “known”, I add with still a vestige of hope variety in the Washingtonia genus I refer you to my write up on that palm.) 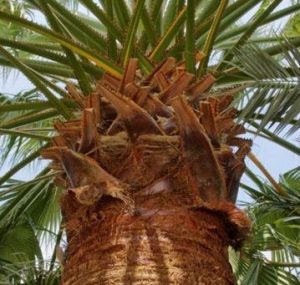 Beyond that, allow me to briefly describe one. Unless fronds are trimmed off when dead, the trunks will maintain a skirt of them beneath the crown of live ones hence the other name of Petticoat Palm. The six-to-eight foot (1.8 – 2.4 meters) wide leaves are yellowish green to silver gray green and are borne on six foot long petioles. Its inflorescences grow from the leaf crown and extend significantly beyond it. The blossoms are unisexual. They produce clusters of dark brown to black fruits. And for those with a penchant for minutia, filifera, in its Latin name, means “thread bearing” which alludes to its frond’s whitish, thin and curling fibers thus the other name Cotton Palm.

The Desert Fan Palm likes the sun and responds well to fertilizer. Because of their girth and overall size, they are excellent for use along streets. Conversely, and logically, these are not palms for pots, growing to 60 feet (18.3 meters) and three to four feet (.9 – 1.2 meters) in diameter. It is also cold hardy and, generally speaking, does better in Mediterranean climes than in the humid tropics. And, while for short periods drought tolerant it will grow much better and generally fare more successfully with good, solid, regular watering. 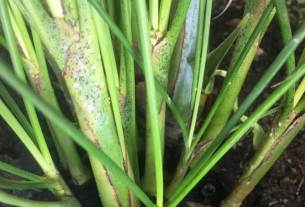