By Terry Sovil on the December 2019 Edition

There are 338 known species of Hummingbirds, or Colibri, in the world. There are 50 that live in Mexico, but only 12 are endemic. A reference page from Puerto Vallarta calls out 8. All are small birds with weights from 2 grams / .07 ounces up to 24 grams / 8 ounces. All have long, thin bills and tubular tongues through which they feed. All use nectar as a main source of energy and small insects for food. These birds can fly! They hover and fly sideways and backwards, driven by chest muscle that is 30% of their body mass. That means 80 wing beats per second and up to 200 during courtship! Courtship drives them from 50 to 95 km per hour / 31 to 60 mph.

They have a high metabolism, some of the highest body temperatures in warm-blooded animals, getting to 40 C or 104 F. This means they need to eat half of their body weight every day. Translation: eat every 10 minutes! They have keen eyes they depend heavily on. That pushes them to one of the bigger brains among birds at about 4.2% of their body weight.

Hummingbirds are iridescent, meaning their colors change depending on how the sunlight hits them. This can mean brown or dark in the deep shade and bright metal colors in the bright sun. This makes them hard to identify. Males tend to be more colorful than females. Most photos are of males. Plus, they fly away, FAST! Hard to identify.

Hummingbirds feed on nectar from flowers of many plant species. They also pollinate more than 1,000 species as they feed. Flowers that contrast with their surrounding attract the most. Their bills have adapted in length, width etc. to plants they commonly use for nectar.

Want to try feeding hummingbirds? Get two feeders. It works better. They will fight and claim territory, so 2 red feeders is a good start. I’ve ordered online, from Amazon, but pay a visit to La Marina. They carry decent feeders. Get the feeding holes small. I’ve got two kinds of Orioles and Woodpeckers feeding. Their weight tips the feeder and it spills on the floor or ground and turns a nasty black.

The nectar? One cup of sugar estandar and 1 cup of water. Boil it. When it boils, add 3 more cups of water. It creates 1 liter. Nectar will last 5-7 days in the refrigerator. If you are just starting, don’t completely fill your feeder. Wait for more birds. Don’t let the nectar sit in the sun for more than 2 days as it will start to ferment! Boiling not only dissolves the sugar, but it sterilizes the nectar.Use only purified water, not tap water. Keep the feeders clean. Get some small brushes and other types so you can keep any black mold away! Clean daily.

Hummingbird nests vary depending on size. Nests are built with twigs and leaves; cobwebs hold it together. They camouflage or hide them with lichen and moss. They will nest on very thin branches of trees and shrubs. Females handle construction.

Hummingbirds are polygamous meaning the male may have more breeding partners in a year. Females raise the chicks, feeding them nectar and insects. Normally, two white eggs are laid.

Do hummingbirds migrate? Yes! Some incredibly long distances. An example is the Rufous Hummingbird. This bird breeds in Alaska and Canada but then winters in Southern Mexico. This is a migration of 6,000 km / 3,728 miles! They have sites for eating and resting along the way and will stop for a day, or possibly weeks, to recover and start again.

Here are the 7 hummingbirds in Colima

Golden-crowned emerald
This bird is bright emerald green. It is not endangered, and habitat is in Mexico mostly on the western coast.

Mexican Woodnymph
In western Mexico, Colima, Jalisco and Nayarit, it is a humming-bird that enjoys subtropical and tropical habitats. Habitation is under threat. This bird is green on top and grey below, with blueish tail feathers.

Long-Tailed Hermit
Scattered along the Pacific near Nayarit and Chiapas but from Mexico to Brazil. It enjoys nectar from Heliconia and Passiflora. They feed by trap-lining, where the bird visits the same feed sources on a regular, repeatable sequence, much like trappers check their traps.

Broad-Billed Hummingbird
Colorful and broad-billed, it can be found from Mexico to Southeastern Arizona. If they nest in Arizona, they migrate back to Mexico. If they are resident in Mexico, they are year-round residents.

Plain-Capped Star Throat
A large-sized hummingbird 11–12 cm long weighing approximately 7-8 grams. Colored predominantly metallic bronze on their upper parts, tail, back and crown with a dark eye-stripe and a white stripe above and below.

Violet-Crowned Hummingbird
A medium-sized hummingbird, 10 cm long weighing 5 grams. Has a violet-colored cap. A dark olive green for upper parts and tail. Under parts are white. 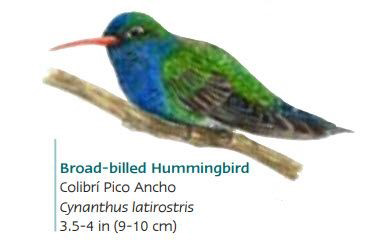 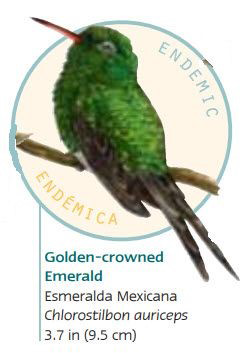 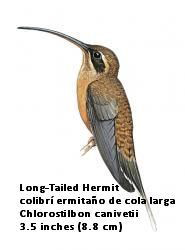 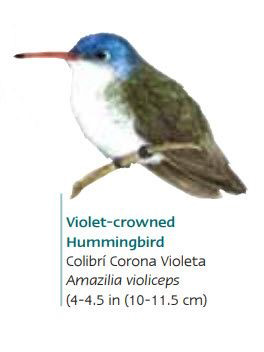 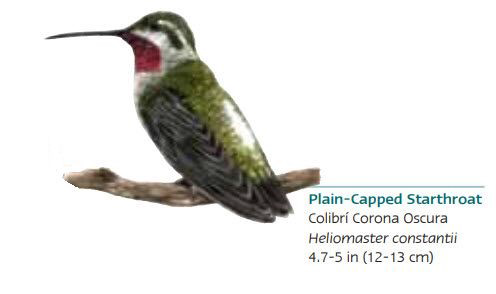 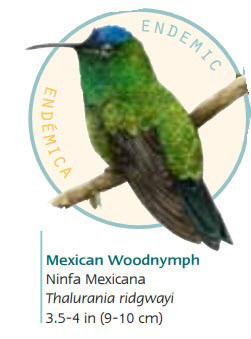 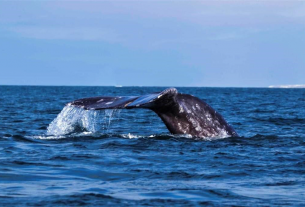