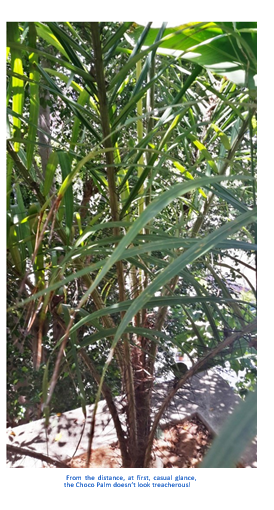 By Tommy Clarkson on the September 2020 Edition

Also known as Lancetilla or Chichon

The genus Astrocaryum is comprised of eighteen, very spiny, pinnate leaved palms. As a whole, they grow naturally

in the West Indies, through Mexico, through Central America and into South America. The genus name is derived from the Greek words meaning “star” and “nut”, referring to the pattern on the seed coat. While a few of these are of the clumping sort, most are solitary trunked while a few have subterranean stems. For the most part, these are undergrowth, rain forest plants prefer-ring full to partial shade.

In “An Encyclopedia of Cultivated Palms,” Robert Lee Riffle and Paul Craft stated, “Some have plume like leaves because the leaflets grow from the rachis at different angles; many others have flat leaves with leaflets in one plane. All the leaflets are silvery or white beneath. The juvenile plants of many species have entire leaves with unseparated leaves.”

They go on to say, “the inflorescences grow from the leaf sheaths and are accompanied by a large, persistent, spiny paddle shaped bract. The flowering branches bear male and female blossoms, are usually short, and are formed at the end of long peduncles which elongate and become pendant as the fruits mature. The latter are formed in clusters and are yellow to brown, mostly globular and spiny.”

They then address the proverbial heart and soul (or would that be needles and spines?) of these small palms, “These species are of exceptional beauty at every stage of growth, have stout and vicious spines on most of their anatomy, and are difficult to handle; they are not recommended for planting in high traf-fic areas. (Might I editorially embellish on this and suggest “In no areas near where folks might be?)

This spininess is one reason these beauties are still rare and difficult to find, but are worth the effort.” 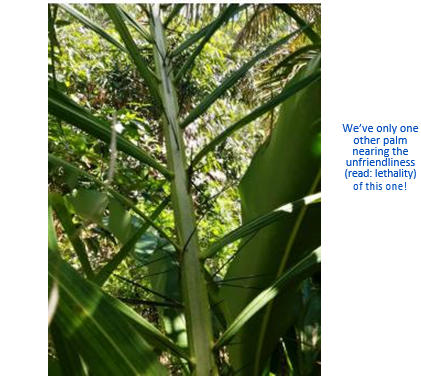 They wrap up their thoughts by saying, “This exceptional, small palm is among the most beautiful in the family, especially when young. It needs a protected, partially shady spot to keep its gorgeous leaves from splitting and is unsurpassed as a patio or close-up subject (They are both, obviously, much braver than am I, having been on the receiving ends of those needles too many times!) Planted in groups of three or more individuals of varying heights, there is hardly a more beautiful landscape subject.”

Appropriate to some of the previously stated, the Astrocaryum mexicanum is a smallish, solitary-stemmed, evergreen palm tree. It is found in the rainforests of Mexico, Belize, El Salvador, Guatemala, Honduras, Nicaragua and here, in Ola Bris Gardens! They usually grow to just under five feet to nearly twenty feet (1.52 – 6.10 meters) in height with an occasional exception to well over twenty-six feet (7.92 meters). The unbranched trunk can be three inches (7.62 cm) in diameter. And, yes, the Choco Palm is armed with a copious number of spreading, stout, black spines one to two inches (2.54 – 5.08 cm) or more long.

It has no crown shaft (applying to pinnate-leaved palms only, this means the tubular or cylindrical shaft above the woody part of the trunk consisting of expanded and tightly packed leaf bases). Its top is a crown of seven to ten arching, sparingly divided, somewhat dark green leaves with a lighter underside, comprised of irregularly divided leaflets. This spreads for eight to twelve feet (2.44 – 3.66 meters). Its mature seeds are brown with spines and germinate erratically  anywhere from ten to twenty weeks. 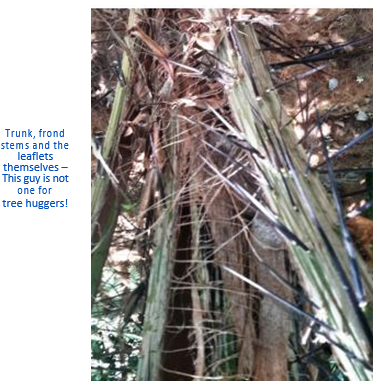 As to its inflorescence, such is one foot (30.48 cm) long from within its crown. The blossoms are creamy, pale yellow whitish and, purportedly, edible! In turn, its fruit is ovoid; 2″ (5.08 cm) long and heavily armed with short spines.

With a somewhat slow growth rate, and appreciating regular watering to keep its rich, well-draining soil rather moist, they are not heat, drought, salt or wind tolerant. And, yes, while requiring high humidity in such a locale, it can be grown as an indoor palm – but with those dangerous needles, why? And, away from the civility of one’s backyard, in some of its native regions, it is harvested from the wild as a local source of food and materials.

So, the call is yours! The consensus appears to be that these are attractive palms and properly located a delight to be-hold. Yet, I would be sorely remiss if I did not repeat myself in pointing out the less than desirable ramifications and results from either poor placement or tree hugging of them! 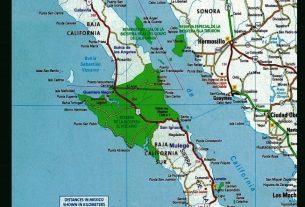