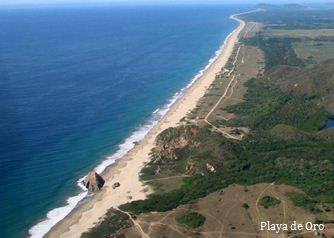 By Manzanillo Sun Writer from the December 2015 Edition

On July 21, 1862, the SS Golden Gate, a jewel of the Pacific Mail Steam Ship Company, began her 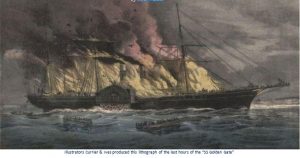 scheduled run, from San Francisco to Panama, with 338 passengers, mail, cargo and a consignment of over 1.27 million dollars in gold. This was to be a fateful voyage as she caught fire, burning to the waterline just off shore from where the Manzanillo airport is now located.

Built in 1851, the SS Golden Gate, a wood steam-sailing ship, 269 feet in length, with a capacity for over 700 passengers on three decks, was considered the sleekest and fastest of its time. Two 33 foot side wheels powered by newly-designed oscillating engines carried the Golden Gate at twelve knots to a record run of eleven days and four hours; a record that she held for four years. 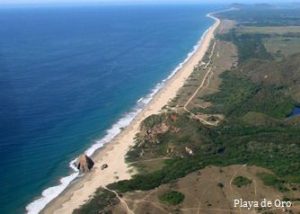 First reported in the aft galley, the fire got away, spreading quickly rearward toward the engine room.

While crew and passengers alike fought gallantly to contain the fire using the ship’s modern fire pumps and buckets. It divided the ship in two, trapping many passengers and the engineering crew in the stern.

Realizing the gravity of the situation, the Golden Gate’s master, Captain Hudson, ordered the chief engineer to open up the engines as he turned the ship full ahead toward shore. Shortly after that he lost contact with the rest of the ship due to the fire.

The crew, rescued from the smoking engine room and passengers caught behind the fire, were forced to take to lifeboats while the ship raced to shore. Most made it to the boats, but some were forced to jump overboard, to be rescued later.

About 300 yards out, in twelve feet of water, the Golden Gate was beached in high surging surf. On grounding about 300 yards from shore, the ship was almost entirely engulfed in flames. Captain Hudson ordered remaining passengers to lash onto anything that would float to support them and lowered the survivors into the surf by rope.

Over 200 passengers and crew lost their lives that day. Those that made it to the boats gathered together and after rescuing those that were in the water, headed south to Manzanillo. The remaining survivors gathered on the beach and watched as the Golden Gate burned to the waterline.

By morning the bow and stern had broken loose and floated to the beach. Only the engines and ship’s machinery were visible above the surf. Almost all the survivors suffered from burns and dehydration.

After gathering what food they could, 100 souls marched south along the beach toward Manzanillo only to be stopped at an impassible spot where the jungle met an impassible cliff.

The SS St. Louis, a sister ship, dispatched north from Manzanillo in search of survivors and with a good deal of skill and maneuvering, was able to rescue everyone from nearby rocks. After returning to Manzanillo, the St. Louis took the Golden Gate survivors, including Captain Hudson, back to San Francisco.

I feel a need, at this point, to provide a little historical perspective because, in 1862, the transcontinental railroad had not yet begun construction, buffalo roamed the prairies in great herds, and the only way to get across the US was by wagon train or stage coach through the wilderness. Hard to believe that it was easier and faster to get from coast to coast by boarding a ship and traveling south, crossing overland across the Isthmus of Panama and then up the Atlantic coast.

In 1862, the United States was in the middle of a civil war and the California gold rush in full swing. The Pacific Mail Steam Ship Company was under contract with the US government to carry mail and troops from San Francisco to the Isthmus of Panama. They also carried much of the gold and silver found in the California gold rush to the eastern U.S. Upon arriving in Panama, passengers and cargo were transported overland to ships waiting on the Atlantic side from where they would travel north to New York.

In fact, a prominent stage coach entrepreneur, Ben Halliday, had booked passage on the Golden Gate’s fateful voyage. He survived to tell his tale by lashing himself to a ladder and jumping over board; passing under the paddle wheel. He was picked up later by a lifeboat.

Paper money had only recently been put into circulation. Back then, most passengers used gold and silver for commerce, keeping their wealth in money belts and bags. After the Golden Gate grounded, most survivors were obliged to drop their belts in the surf to save themselves, salting the foreshore with gold and silver. It’s said that even today after a storm an occasional coin washes up on the beach giving the beach and the local area its name, Playa de Oro.

Thoughts of salvage began almost upon hearing the incident, but strong currents, unpredictable seas and shifting sands made it almost impossible to reach. Within weeks, the S.S. Active was dispatched from San Francisco to attempt a recovery but without success.

By the end of 1862, four of the ship’s insurance underwriters launched a salvage effort, claiming to have recovered $300,000 in gold.

In 1903, an engineer named C.W. Johnson, built a pier out to the wreck site. He claims to have found a million in gold before a hurricane took out the pier.

Up to the 1930’s, several other attempts were made to find what fortune lay buried in Manzanillo’s sand. By that time, it’s claimed that 1.5 million in gold had been recovered. Yet in the 1960’s, rumor has it that a local named Veralman salvaged an undisclosed sum of gold and used it to build a hotel nearby.

Today Playa de Oro is a wild beach with variable surf up to 20 feet. It’s beautiful place to explore and if you go there, you never know, you may find a coin or two!

Salvage of the S.S. Golden Gate

Who is that man in the mirror?