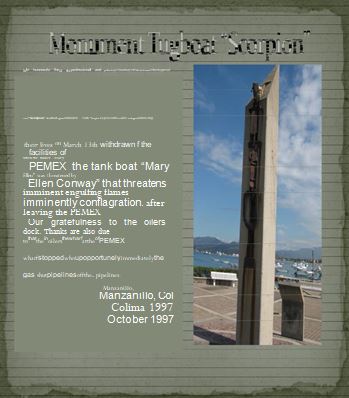 By Freda Rumford from the February 2010 Edition

Pictures contributed by Director of Tourism for Manzanillo, Edgar Lepe.

Along the sidewalk by the ocean in central Manzanillo (the Malecon) are statues donated to Manzanillo by the Governor of the State of Colima over the past few years. These are a series of monuments dedicated to the oceanic way of life of the people living in the Port City of Manzanillo and given in appreciation of the important part that Manzanillo plays in the economy of the state of Colima. There is no single individual portrayed, as in the case of the various statues of dignitaries also in the downtown core.

Whilst enjoying the views of ocean and moored boats in the harbour, take a moment to read the inscriptions on the monuments and consider the lives depicted.

Manfred and the Winning Hand

So what’s to do when in Manzanillo for several months?