By Suzanne A. Mrshall from the January 2017 Edition 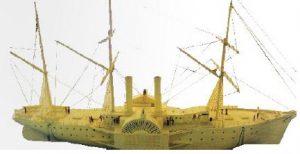 bound for Panama. The boat was the S.S. Golden Gate. She set a record for the trip of 11 days and four hours, averaging a speed of 12 knots (13mph/22kph).

The Golden Gate was 15 miles offshore, just west of Manzanillo, when a fire started in the floor between the engine room and the kitchen. It was about 4:45pm. Everyone was sitting down to eat when the Captain was interrupted with news of the fire. It was beyond what he imagined. With only 15 miles to shore they decided to run to the safety of the beach. Both Capt. W.H. Hudson and R.H. Pearson went to the scene of the fire. Pearson took command of the firefighting and Hudson commanding the ship. The two captains were on-board because the regular commander, Pearson, was heading east on vacation, so Hudson had command.

The first and second-class passengers were ordered forward but the steerage passengers, in the rear, with the wind and mo-tion pushing the flames to the rear, would be trapped. Fire soon made it impossible for the captain to communicate with the engine room and W. Waddell, the chief engineer. It was Pearson who knew that the engine crew was trapped, so he broke down the bulkhead in the after-freight room to rescue his chief engineer and at least a dozen crewmen.

The ship was equipped with pumps for firefighting, with several lifeboats, and with more than enough life preservers for the people aboard. Life boats were launched but at 5:15 pm the ship was still 3-4 miles (5.5k) from shore and flames were now coming from the engine room hatch.

As the engines roared, and drove the boat toward shore, it pushed the flames from mid-ship to the rear of the ship. The fire spread quickly and engulfed the ship in flames. Survivors were forced to jump over 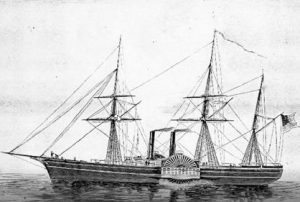 board to face the surf and the waves rather than the flames. Many were too weak from exertion and/or burns and they never made it to shore. Those that jumped from the front of the boat stood the chance of being pulled through and around the paddle wheels

People were in a panic. Many had checked their gold in the purser’s office. Many were demanding to get it back, which the purser could not do in an emergency. Most were using special money belts as coins were still the currency. Some went over the side with them on and sunk to the bottom. Some just threw them on the deck. The deck was littered with belts and coins, from several eyewitness accounts. The flames were bringing down rigging that had been treated with tar so hot tar was falling everywhere. People were being burned by ash and cinders.

At 5:30 pm, the ship had run aground about 300 yards offshore in heavy surf at what is now called Playa de Oro. Captains Hudson and Pearson were the last to leave the ship. The foremast and the upper deck caved in to the fire at this time, but still the engines kept working. Hudson and Pearson tore off their clothing, then hung from the bowsprit, awaiting a chance to jump and not be crushed by the 2,000-ton ship rolling in the surf.

A couple of the life boats caught up with the ship once it had grounded a distance from shore. After rowing around the ship they could find no more people. They searched farther offshore and found 5 or 6 floating on boards and timbers.

The wreck came 154 years ago on Sunday evening, July 27, 1862. When assistance arrived, it was found that 72 of the passengers and 62 (134) of the crew survived. In all, 204 of 338 perished or were missing. The ship itself was destroyed by flames and the pounding seas. The dead were buried at the beach, including at least four women.

On the afternoon of the 28th, the Manzanillo customs boat picked up two of the survivors from the group. It was another day before the steamer St. Louis managed to rescue the balance of the survivors, most of whom went back to San Francisco on the St. Louis (except a few of the Golden Gate crew).

Another 23 were missing from a lifeboat commanded by James Scott, the ship’s 3rd officer. They drifted about 80 miles to the south of Manzanillo and didn’t reach San Francisco until Aug. 18, when the steamer Orizaba brought them to the city.

What about the gold? The beach Playa de Oro was named for the gold that went down with the ship. The bulk of the gold was recovered from the storage area and returned to Wells Fargo in 1863. But searches for the purser’s office and that safe went on until the safe was found and lifted from the wreckage in 2003.

CEDAM, founded in 1967, the Conservation, Ecology, Diving, Archaeology and Museums, is dedicated to the preservation and conservation of the marine environment. Using their archeological approach, they mapped the wreck site and then dug through 9 feet of sand to find the purser’s office and recover the safe. Playa de Oro has treacherous currents and waves and the wreck, as big as it is, has been covered with sand. Claims are that the beach, or shoreline, is being filled with more and more sand so eventually you may be able to dig for the wreck! Many adventurers and metal detector fans still work the beach area looking for coins and gold.

At the Movies- Geostorm