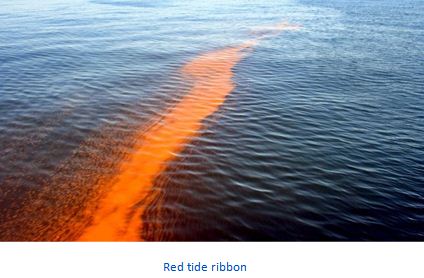 By Terry Sovil from the April 2017 Edition

Saltwater is alive with microscopic life. See the photo of a single drop of sea water magnified 25 times. 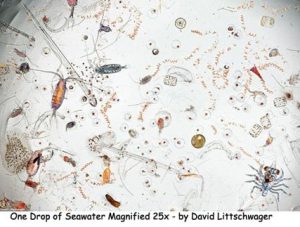 That will keep you on the beach! Most is harmless and forms the base of the food chain, food that ultimately all aquatic life depends on. Algae grows in balance with the ecosystem it is in, limited by the nutrients in the water. Sometimes certain species of algae can reproduce extremely fast and damage the area. Algae that “blooms” into dense patches near the surface are often called RED TIDES.

Red Tide is a term that has been used for a long time but the newer term for an algal bloom associated with potentially harmful toxins is a “Harmful Algal Bloom” or HAB. One reason  is that a HAB is not associated with tidal water movement and may not be red or any color at all. 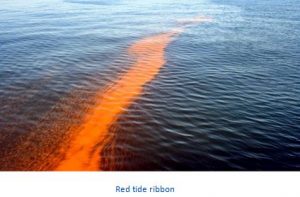 A HAB can harm by producing toxins which can kill marine organisms, make shellfish inedible, foul the air with a nasty smell and sometimes cause skin irritations. HABs occur all over the world. Marine scientists from Texas A & M University report  that in the past 15 years there have been more blooms re- ported than in the previous 50 years!

HAB creation could be influenced by rich runoff from land or a warming climate. HABs can do serious damage such as the devastation of Long Island, New York’s scallop fishery and closure of shellfish beds. As the toxin moves up the food chain it can impact fish, overgrow on corals, close harbors or block sunlight to seagrass and other critters. Larger forms of    algae, such as seaweed, may grow out of control in areas with high runoff from land or sewage pollution. 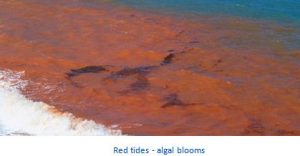 early warning to a HAB. Forecasting systems can pull satellite images and information from weather buoys and form some estimates on how a HAB might spread.

People in Mexico are not strangers to HABs. See the map labeled “Areas in Mexico with Toxic HABs”. The map shows areas that have experienced toxic HABs all around Mexico (Pacific, Sea of Cortez, Gulf of Mexico and Caribbean).

The map was prepared from data collected in over 100 reports from various researchers. Their reports were in various forms of media so it was studied and put into standard categories. One conclusion is that there are just a few cases where the toxins and the impact they had on the ecology and social and eco- nomic impacts were studied. Very little data is provided about the conditions that triggered the sudden HAB blooms along  the Mexican coast. They found several times when studies from various researchers point to the same location. This doesn’t mean that the same HAB bloom was reported repeatedly but that location was hit several times.

The events reported seem to say the Pacific Coast had more HAB events than the rest of Mexico (East side) combined. It could also simply indicate more research has been done on the Pacific side.

So what does that mean to Manzanillo? Here’s a table that  puts us in the “good grower” area:

There is little danger to humans but swimming in a HAB can leave you, and your swimsuit or wetsuit, very smelly and dirty. It’s much harder to clean up than normal. Visibility can be  poor. If you have an open wound, abrasions with susceptible skin, eye and / or upper respiratory tract and ear problems you may want to avoid the water when a HAB is present. People who consume contaminated shellfish (mussels, clams, oysters and scallops) may contract one of four shellfish poisonings. They are: Paralytic Shellfish Poisoning (PSP), Amnesic Shellfish Poisoning (ASP) (rare), Diarrheal Shellfish Poisoning (DSP) and Neurotoxic Shellfish Poisoning (NSP). 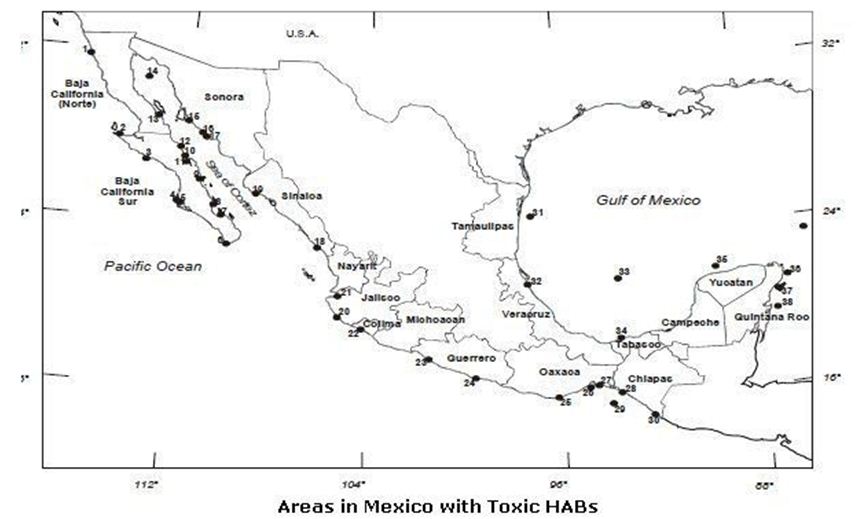 So the biggest danger to people during a HAB is from eating shellfish that have absorbed the toxins from the water. If during a HAB where you have eaten shellfish you experience tingling  in the lips, a numbness, abdominal pains and diarrhea you should seek medical help quickly. In Mexico, all cases of hospi- talization and casualties due to Red Tides have been PSP- related. If you want more details on poisoning visit DAN (Divers Alert Network) here: https://www.diversalertnetwork.org/health/ hazardous-marine-life/red-tide-and-shellfish-poisonings.

Know what you are eating!

How to Find a Financial Advisor Who (Really) Meets Your Needs