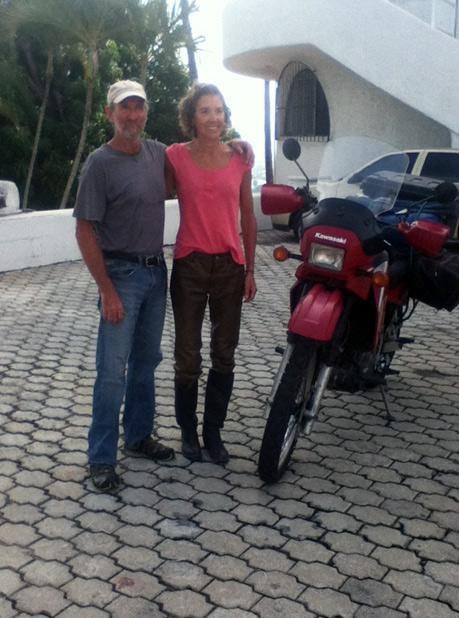 My Story
Riding motorcycles from Vancouver Island Canada to Puerto Escondido Mexico and then back up to Phoenix Arizona has been quite an adventure and will continue to be so until we return home I’m sure. My husband Stan and I have been told that we must write a book someday of our many adventurous trips. I think one of the reasons that they are adventures is because of the unknown.

We usually just wing it. It is rare indeed that we have any plans as to our final destination, or where we will stay, or eat each day along the route. We each ride our own Kawasaki KLR 650. but don’t ask me anything about the bike. I am just happy that it runs and gets me where we are going. I’m still a rookie.

On this, our third trip, we left Courtenay on Vancouver Island on October 9th 2013. Our first stop was Victoria where we took a ferry across to Port Angeles Washington. It was raining and cold. Not the most pleasant way to start a 10 week trip. Later, we found ourselves riding in the dark which is something we had promised ourselves we would not do. This was in order to find a hotel. The rest of the nights we camped while going through the states.

Our route was planned for the Interstate 101 down the coast of Washington and Oregon, then to switch over to the Interstate 1 along the coast of California. Riding through the redwoods was unforgettable, as was the rugged coast of Oregon and the very winding road down the coast of California. All beautiful though, with the weather getting warmer and warmer. We continued on to San Francisco, across the famous Golden gate Bridge. Then a little further on we started to maneuver our way through the intense traffic of south Los Angeles before heading east towards Arizona.

We had been warned about possible trouble at border crossing areas and told that we should join up with a convoy of RV’ers to travel for the first 200 km into Mexico. Instead, we chose a small border crossing called Lukeville, west of Nogales.

After camping in a clean but desolate campground, we crossed the border early in the morning in order to ride to Hermosillo, Mexico that same day. Visas and motorcycle bonds had to be purchased at two different locations en route. Luckily, we had an early start as the paperwork took a long time at both places.

From Hermosillo, we headed east to the Copper Canyon. We were in the Sierra Madre mountains and would follow them through central Mexico. This meant crazy twisty roads but beautiful scenery. Luckily, it also meant very little traffic. We value our lives and so drive with caution which means not too fast, not passing uphills or around blind corners. It’s amazing what others will do though. There were so many obstacles to avoid – not only huge potholes but also animals. Often though we found the roads very good. Riding a motorcycle is such a great way to travel as you see so much of the terrain and so often in one day.

Durango suits its name as it is cowboy country. We were mainly staying in hotels along the way but we did camp out in the open where there wasn’t any accommodation. We would just hide ourselves and our bikes and hunker down.

Zacatecas was a very interesting city. There, we stayed in a very old and historic hotel depicting the mining in the area. We weren’t quite sure how we would get from Zacatecas to south of Mexico City. It is a tangle of cities at that point and we had already discovered that we much preferred the smaller pueblos and countryside to the bigger chaotic and confusing cities. When riding in the countryside, I leave a bit of space between Stan and myself. Riding in the cities, I hug his back tire so as not to have anyone or anything coming between us. If we were to get separated, it would be a nightmare to find each other again. We don’t have walkie-talkies. Stan uses our GPS which is usually dependable, except when it tries to make us go down one-way streets. I follow closely behind.

From Zacatecas, we made our way south to San Miguel de Allende, where my sister and her husband were staying for a couple of weeks. Now things really got confusing as we tried to avoid Mexico City on our way to Oaxaca City. We did avoid central Mexico City but it seems to just spiral out many many kilometers from the center. It seemed like one great big city to us – the whole day.

People we asked for directions tried to be helpful but we would get four different directions from four different people. Once past Cuernavaca, it was fairly clear riding to Oaxaca. From Oaxaca, we rode the very twisting road south to Puerto Escondido. The road was not only twisty and hilly but had many washouts due to heavy storms the

previous month. At several locations, we would come around the corner only to find a huge boulder or boulders on the road. I think we probably had an advantage being on motorcycles as the car and bus drivers had much more difficulty in skirting the huge potholes and boulders which would block the lane.

It was a welcome sight to finally see the outskirts of Puerto Escondido and know that we would be there for two weeks. It had taken 21 days of riding to get there. Now we are on our way back up north via the west coast of Mexico. The entire ride has been fantastic. Just to mention a couple of experiences so far in Maruata, we saw turtles slowly coming to the beach to dig huge holes where they then laid their eggs. Another time was riding through 300 cows that were being herded down the road. We were told to go through the herd by the herders so I guess it was safe, but quite daunting all the same as they were big and many had huge horns. I felt they could easily just knock me off my bike. 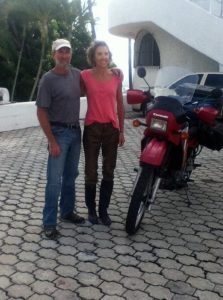 More stories to eventually tell everyone!

We have time now to meander up the Mexican coast as we don’t fly home from Phoenix until December 15. We don’t want to ride in snow and ice so that is why we are flying home from there. Then we will fly back to Phoenix in the spring to ride our bikes home. It will be yet another adventure.