By Tommy Clarkson from the August 2017 Edition 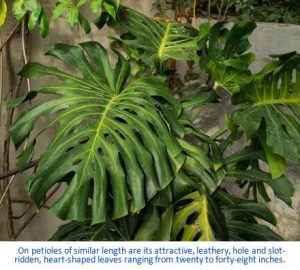 So dissimilar in appearance from many other plants, visitors of-ten inquire as to the function of their leaf holes. I’ve read, but cannot absolutely attest to it as being correct, that some botanists believe that these holes help the plant to stand up to high winds. Yet others assert that the holes function is to allow sunlight to pass through to its lower parts. While even others adamantly believe leaves cut like these better resist damage from drenching tropical downpours.

The genus Monstera was once glumped (a highly technical term I am sure) within the Philodendron species. They had not their own identity. (It was a tragically sad situation. But they picketed, demonstrated and conducted non-violent sit-ins in which they “planted” themselves in public venues singing songs like “Where have all the flowers gone?”. In calling attention to their pathetic plight of non-recognition as a separate group, they ultimately prevailed! (Are you believing this?) 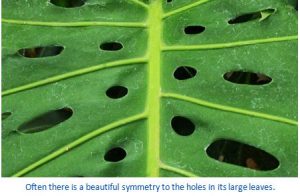 However, the change really did happen. Monstera plants are now recognized as a separate genus. On a petiole of similar length, with leathery, heart-shaped leaves ranging from twenty to forty-eight inches (50.80 – 121.92 cm), the highly attractive Monstera deliciosa may be the best known of this group. (Delicious monster, what a great name!) It’s sometimes con-fused with the equally unique, smaller-leaved, Monstera obliqua whose leaves are between five and six inches (12.70 – 15.24 cm) long but get significantly larger on mature plants that are encouraged to climb. It is often called Swiss Cheese Vine or Swiss Cheese Plant – which some call this species! (Confusing, ain’t it?)

On petioles of similar length are its attractive, leathery, hole and slot-ridden, heart-shaped leaves ranging from twenty to forty-eight inches.

Young Monstera deliciosa will not have the distinctive leaf shapes that a more mature specimen develops. As a result, many confuse it with one species or another of the Philodendron genus. (For those who seek the more difficult to find, try to acquire the slower-growing, variegated cultivar called M. deliciosa variegate.)

While preferring the climbing mode, the Window Leaf also does well in a large pot with ample space around it. If situated in a place it likes, with room to go and grow, it can reach heights up to sixty-five feet (18.29 meters). Regardless of its lo-cation, it requires humidity, rich organic soil and indirect sun or partial shade but it doesn’t care for direct sunlight. It needs a lightly moist soil but, like the dauntless doughboys enmeshed in long periods of muck-mired, trench warfare of WWI in Europe, sustained “wet feet” can cause major health problems!

Being a part of the Arum family, its flowers are – well – rather unremarkable. But there are two intriguing 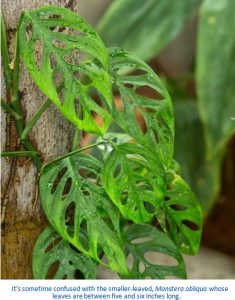 factoids in this regard: First, the fruits produced by your Window Leaf (which, by the way, is rare indoors) can be eaten once ripe – but make sure they are, as unripe fruits are not good for you. Their taste is purported to be a rather delectable, a cross between banana and pineapple mixed with tiny hints of other tropical fruits. (Sorry Euell Gibbons there’s no taste of wild hickory nuts!) Secondly, this species will produce a large flower guaranteed to elicit comments and conversation though it’s not all that attractive.

Feeding is essential, be it monster or otherwise. So if you seek lush green growth, apply normal fertilizer, at the standard strength, no more than once a month during the periods of its active growth.

Trivia Time: Accordingly to the Naturalist.org, “The French Guiana Palikur mix the crushed leaves in rum, alone or combined with the crushed leaves of Psidium guajava, and make a plaster which produces a cicatrising action in treating leishmaniasis”. (When I read that I thought, “Now if I only understood it, that might be interesting. So to my books I went!)

From them I learned that the “Palikur” are the indigenous people who live along the rivers in the state of Amapá in French Guiana. (One down.) “Psidium guajava” is a tropical American, spreading-branched, tree, over thirty feet (9.14 meters) tall, that’s easily recognizable by its thin, smooth, copper-colored bark which flakes off, displaying a greenish layer beneath.

(That’s two.) “Cicatrising” means to “become healed by the formation of scar tissue”. (Now, three complete.) And, as described by the U.S. National Library of Medicine – found in eighty-eight countries, “leishmaniasis” is “a parasitic disease spread by the bite of infected sand flies”. (Bingo Four for four!)