By Tommy Clarkson from the September 2015 Edition 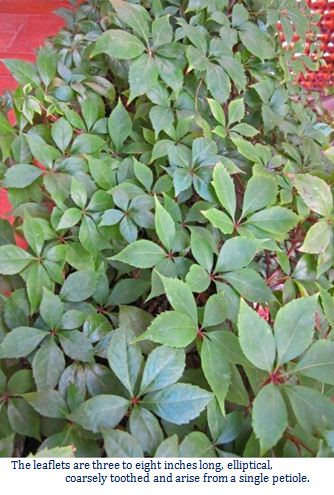 From the outset I gotta’ assert “This is a very flexible plant!”

It cheerfully thrives from as far north as Southern Canada, through the U.S. to as far south as at least here in the State of Colima on the Central Mexican Pacific coast. I know the latter to be true as it happily hangs from our coconut log planter on the southern edge of our Dining Palapa Terrace

Super easily grown, it handles with equal aplomb average, medium to well drained soil varying from full sun to part shade. Suffice it to say, it’s not a difficult guy to grow!

That having been said, the Virginia Creeper’s ideal environment is the “wet but well-drained, nutrient-rich woodland with abundant trees and shrubs on which its active tendrils can attach and grow.” In the absence of trees, however, it can still attain a rather dominant presence by forming a dense ground cover through effective employment of its extensive tendrils as roots. Some folks, in fact, use it as a sturdy, ground cover in areas where grass won’t grow. 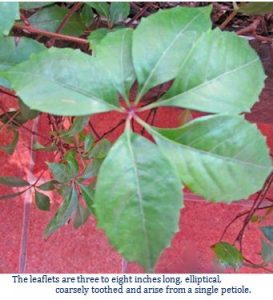 The leaflets of Parthenocissus quinquefolia are three to eight inches long, elliptical, coarsely toothed and arise from a single petiole and can, on older vines especially in the shade, form a leaf up to one foot (30.5 cm) in total diameter.

Its vines are covered with a grayish brown bark, roughened with concave leaf scars. With age, these get woodier/sturdier as fine tentacles (for wont of a better description) reach out from them along the vine. These can form new stems or become tendrils used by the plant to attach itself to that on which it wishes to grow.

These tendrils grow to four or five inches (10 – 12.5 cm) with five to eight terminal sub-branches. They attach themselves onto whatever they wish to grow by a tiny, tip disk that secretes a resinous cement. The strength of the adhesivity of this resin is such that a single tendril can support up to ten pounds. The tendril branches that wander about finding no surface from which to grow, twist into cork-screw shapes that hangs from the vine main stem.

The numerous branches of a fully mature Virginia creeper grow toward the strongest light averaging four to five inches per year with, given the absolute best conditions, growth all the way to twenty feet per year

“Has it flowers,” you ask? Yes, they’re small, inconspicuous, and colored near white to green. They cluster on the tips of the leaf petioles hidden from view underneath the leaflets. In “bit of the bizarre”, they can be “unisexual” (containing either male or female structures) or, as is more common, “bisexual”) containing both male and female structures.

Eaten by creatures of the wild, both avian and mammalian, the clusters of dark blue berries (poisonous to 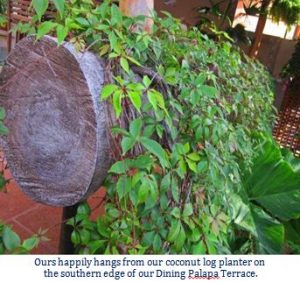 humans) atop the flower stalks have their seeds dispersed via the feces of whatever animal ingested them. Those which survive this fate ultimately fall to ground and either germinate or are consumed by small, foraging rodents.

Seemingly just full of questions, you next may ask, “In what other ways is the Virginia creeper of use to ‘critters of the wild’”? Well, for one, it provides a great place for bird nests, such as the American robin and the hermit thrush. And second, butterflies and moths such as three species of sphinx moths – lay not only lay their eggs on the leaves of the Parthenocissus quinquefolia but also use the “insect lovely” leaves for habitat as well as food for their larvae.

Dermatitis problems aside, its leaves are rich in numerous protective chemicals. Consumption of the leaves by we humans, may lead to severe vomiting, diarrhea, and narcosis. So said, in controlled doses  purportedly these very same, leaves have been utilized to treat superficial injuries such as skin rashes, toothaches, bruises, bunions and corns as well as internal maladies ranging from liver disease and headaches to urinary ailments and, bronchitis. (Note: While the antiseptic properties of Virginia Creeper leaves are substantively documented, the efficacy of these other uses remain unproven.)

Virginia Creeper will grow over most varieties of shrubs and on most types of pine or hardwood trees but, beware, it can become a parasite killing the host on which it grows.

For back issues of “Roots”, gardening tips, tropical plant book reviews and videos of numerous, highly unique eco/ adventure/ nature tours, as well as memorable “Ultimate Experiences” such as Tropical Garden Brunches Visit us at..           www.olabrisagardens.com