By Tommy Clarkson from the April 2018 Edition

On the left side of Calle Loma Bonita driving up the (very) steep hill to Ola Brisa Gardens grows a fine looking and healthy Texas Sage specimen. It was my introduction to this seldom seen around here lovely, drought tolerant, evergreen bush. Once I’d stopped, pulled my tires into a sharp angle against the curb and ensured that my emergency brake was fully engaged, I dismounted Shane (my long time faithful companion read: accoutrement spartan, but hearty Herculean, 1998 Nissan pickup truck) and went on to more closely investigate this intriguing plant. Immediately, I knew I had to have one!

Prior to actual acquisition, my search to learn more about this lovely bush was simply to reach for Neil Sperry’s Complete Guide to Texas Gardening. In part, he described them thusly, a “rounded shrub [up] to four to seven feet [1.22 – 2.13 meters] [whose] small leaves are a striking gray all season long. [Its] flowers [are] varying shades of orchid and lavender, occasion-ally white [and] very showy against contrasting foliage.” He elaborated on their unique characteristic to tend to bloom three to four days after a nice, soaking rain, but not so following simple irrigation! He wrapped up his thoughts discussing the facts that while much preferring very good soil drainage, the Leucophyllum frutescens can handle poor soil and has virtually no pest problems. 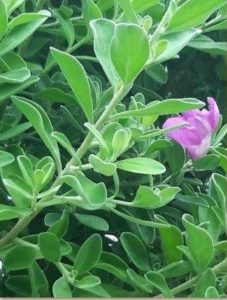 I next turned to Plants for Tropical Landscapes by Fred D. Rauch and Paul R. Weissich to see what they could add. From them, I further affirmed what I’d seen and observed this is a slow growing sort that thrives both in Texas and Mexico (Though up to that time I could not recall having ever seen one in any of our local viveros nurseries).

They said this plant prefers full sun which both of those geographical locales have no little of year around! They observed that their experience had shown, however, that the Texas Sage, in the right conditions, might grow as high as twelve feet (3.66 meters)! They suggested its use being as a “shrub mass substantively different, I suspect, than a High or Holy Mass] clipped hedge, informal screen, or background plant.” They further alluded to the species having more “silvery foliage and various flower colors.”

But what did Robert Lee Riffle have to say in The Tropical Look? Firstly, he stated that Leucophyllum is “a genus of twelve.” Of this variety, he says their mature height is around ten feet [3.50 meters]. As mine is still small, I honestly can’t tell you their optimal size for sure. He described their almost stalk-less leaves an inch [2.54 cm] long and elliptic to oblong, being silvery to bluish-gray in color “because of the multitude of tiny hairs on both surfaces of the leaves.” He goes on to add that “The bush is near perfect in rock gardens or anywhere that is dry and sunny. It is successfully grown in wet climates if planted in mounded or raised beds but suffers and dies in sites with poor drainage.”

Thus, with the base provided by these four highly experienced tropical botanists, I’ll now add my two cents or 35.37 centavos worth! From all I have read and heard, it seems to me that the height of the Texas Sage actually depends on the environment in which it grows. In more arid conditions, it will stay compact and short, probably not exceeding five feet (1.52 meters). Where they have caregivers providing them with additional water and nutrients, obviously they grow more.

The peak of its glory are the Texas Sage’s delightful, one inch (2.54 cm), pink, purple, rose to violet, bell-shaped flowers each with five lobes and two lips each. It can be pruned as necessary to keep it at a size and shape of your choosing. As to how they might best be employed, there are several applications, such as in a mass planting in a row, used as a hedge or screening capacity, incorporated in a general garden use or even employed as a container plant. Should you seek more of them, it is best propagated by seeds or softwood cuttings. And, lastly, if for no other reason to have one, the Texas Sage is a favorite of bees, butterflies and birds.