By Tommy Clarkson from the November 2015 Edition 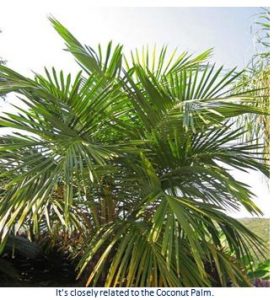 (The following is the result of extensive research in endeavoring to identify a small, slow growing, pinnate, non-self-cleaning, petiole armed palm specimen I acquired several years ago but whose specific name I have never been able to establish. I believe it to be, however, a member of the Syagrus family. Increasingly, I have come to suspect that it is a cultivar.)

According to Robert Lee Riffle in his magnificent 2003 tome, “An Encyclopedia of Cultivated Palms” one of the most knowledgeable palm authorities to have existed, there is only species in this genus to have armed (spines/hooks) petioles (the stem between the trunk and the beginning of the leaflets or frond leaf) as does mine. 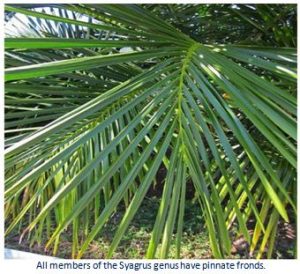 But, with hybridization, that may have changed! In the International Palm Society’s 2011 quarterly publication PALMS, 55(3), Donald R. Hodel of the University of California wrote of new additions to the family. In this article, entitled “Hybrids in the genus Sygrus”, he states, “Several natural hybrids occur in Syagrus. (At least five natural interspecific hybrids occur . . . where the ranges of species overlap . . . and at least two intrageneric hybrids one artificial and the other natural but occurring spontaneously in cultivation.) (This being) a large, diverse and wide-ranging genus of pinnate-leaved, cocosoid palms . . . This relative ease of hybridization, along with the highly ornamental nature and cold tolerance of some of its species from southern Brazil, has  attracted several collectors and growers who, through hybridization, wish to expand the landscape potential of this useful genus. Because at least one of these artificial hybrids has entered the trade and is being widely promoted, I name and describe it here.”

For those smarter than me and your numbers are legion read his entire article at:

http://www.palms.org/palmsjournal/2011/vol55n3p1 41-154.pdf)
But, for those botanically like me a bit on the simple, slow and more elementary side, I fear, after reading such as that let’s talk about this family which originated in South America and the Caribbean. Firstly, it’s a genus of anywhere from 30 to 42 (originally known) solitary trunked and clustering species of palms with a few having but subterranean stems (no trunks). . . . like the elephant who stuck his nose where it shouldn’t have been! Members of this family range from small to rather large and robust. None of these species have a crownshaft. Interestingly, it is closely related to the coconut palm. As one might suspect, numerous of the palms in this family also have edible seeds.

While some of these species like the rainforest, most prefer as noted by David L. Jones in “Palms Throughout the World” “the dry, open habitats such as savanna and semi-arid scrublands”. He goes on to note, “The genus has suffered severely from habitat destruction with at least three species becoming extinct (S. leptospath, S. lilliputaiana and S. macrocrpa) and others reduced to rarity.” 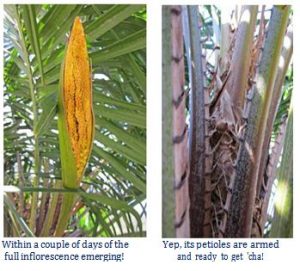 favorites, the Queen Palm (Syagrus romanzoffina). “So why, Mr. Palm Guy, don’t you like the Queen Palm?” I’m glad you ask! To my eye, their fronds are too scarce and scant of leaflets giving the crown a meager bare look; they are unsightly with its dead, dried and ragged fronds and stubs; not a self-cleaner, every dead frond must be carefully cut off; often suffering from potassium deficiency, it gets “frizzle leaf” with ends of the oldest leaves become necrotic and frizzled (curled); and they are, generally speaking, simply a messy palm demanding much more care and attention then they are worth. Suffice it to say of the over ninety varieties to be found in Ola Brisa Gardens, there are no Queen Palms!

The Arikury Palm, however, is an altogether different and much more loveable palm in this family. To read a piece on this attractive character go to http://olabrisagardens.com/palms/arikury-palm/ .

Should you acquire a palm that looks like these pictures, here are my recommendations regarding its care and upkeep. Ensure it is planted in fertile, well-draining soil in full sun. Should you wish, much around it with coconut fiber so as to retard weed growth and keep the soil damp not, mind you, drenched or soaked. But, in that regard, water it deeply twice a week. Mine appreciates quarterly fertilizer of 12/4/12 (I sometimes use 16/16/16.) And, regularly, tell it just how much that you appreciate and like it!

(To order books cited in this piece, or numerous others under the “Advice” tab at the top of the home page of the Ola Brisa Gardens home page (www.olabrisagardens.com), go to “A Review of Plant, Palm and Tropical Flower Books”, find the one you wish, click on it and you will automatically be linked directly to Amazon Books.)

For back issues of “Roots”, gardening tips, tropical plant book reviews and videos of numerous, highly unique eco/ adventure/ nature tours, as well as memorable “Ultimate Experiences” such as Tropical Garden Brunches Visit us at..