By Tommy Clarkson from the February 2016 Edition 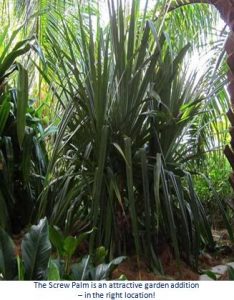 In my best Aussie (and friends from there are now cringing!) I’ll say that “It’s fair dinkum I’m a lizard drinking trying to understand this dog’s breakfast of the ridgy-didge name for this tree. Good on ya’ if you can figure it out!”

Well, actually, if the facts be known, members of the Pandanus genus are not trees such as oak, apple or pine – but rather monocots and distantly related to “palms, bananas, true pineapples and lilies.” The origin of the name Pandanus comes from the Indonesian/Malay name of the tree, “Pandan”. This particular species the Pandanus spiralis can be found in its native environs along the eastern coast of Australia.

Of interest, a good, fun and educational, with great pictures site regarding these plants can be found at: http://tinyurl.com/jpdyo2y 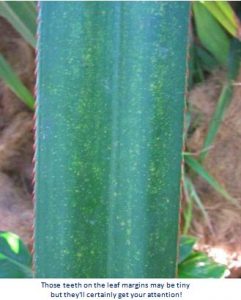 For such a “confused name” plant, it’s an attractive garden addition the next phrase being the vitally important operative words in the right location! (More on that a bit later.)
Common name notwithstanding, this interesting plant is one of approximately 600 – 750 salt tolerant vine and tree-type species that grow wild, primarily by watercourses or along coastal seashores. The first part of its common name is derived from the manner in which its long, prickly leaves grow and arrange themselves in a rather pleasing in appearance, screwlike manner.

Their intriguing looking, prop roots are nature’s way of lending support for those choosing live on beaches. Riffle succinctly discusses them saying, “Aerial, stilt and brace roots are produced from the lower portions of the trunks and mature plants are usually broader than they are wide with the braches spreading horizontally like a Strangler Fig.”

Usually with sharply toothed margins, their often pleated, razor sharp sword-shaped leaves have another row of teeth along the midrib. Suffice it to say, these aren’t the sort of “Let’s hold fronds by the campfire and sing Kumbaya” type of plant pals!

However, some good does come from these hazards as wildlife takes advantage of those spiny leaves by 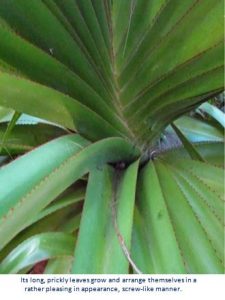 living or nesting in them for protection.
Preferring hot, dry conditions, Pandanus are, nonetheless, highly adaptable plants with specimens growing quite large, twenty to twenty-six feet (6 to 8 meters) in height. Hence care must be taken if planted in one’s gardens.

Pandanus are unisexual (single sexed) with inflorescences on different plants

The large roundish fruit resemble pine cones or pine apples (Maybe this is where the “Pine” name came from!). While these fruits are green when young they turn a yellow, orange or brownish-orange when ripe.

As Outback Joe observed, “The fruit separates into. . . incredibly hard . . . wedges . . . housing several small almond like nuts (that) are incredibly hard and difficult to extract. (These) taste good though with a flavour similar to almonds (and are) high in fat and protein so provide good energy if you can get to it.”

They’re drought tolerant, but like any plant, they’ll do much better with regular watering but don’t expect them to grow super fast!

The easiest method of propagation is by cuttings which root readily when placed directly in the soil. The leaves are used for weaving clothing material, baskets, mats, and shelters. I’ve read that mashed leaves can be used to cure headaches when tied around the head I’m trying to picture that! Seeds from the large, pineapple-like fruit can be ground into flour. And, it’s said to be used for treating inflammation by wrapping the leaves around the swollen area. Other sources to which I have turned, cite that various handicrafts are made from them such as bags, hats, pocketbooks, umbrellas mats and dolls . . . one even asserts that sails have been made from them!

There are around thirty species of Pandanus growing in Australia’s tropical and sub-tropical climes. The ancient Burarra people of that continent use the plant, somehow or another, to make fish traps. Some of those original residents of “Down Under” also make dye from the roots and use it in rock art painting. And those crafty aboriginals clearly have long believed in “waste not, want not” as they used the top leaves for baskets, ate the fruit, and then employed the dead trunks to carry fire with them in the form of smoldering embers which were of use the entire day!

That all having been said, should you have one for your own? Yep, if you’ve space! 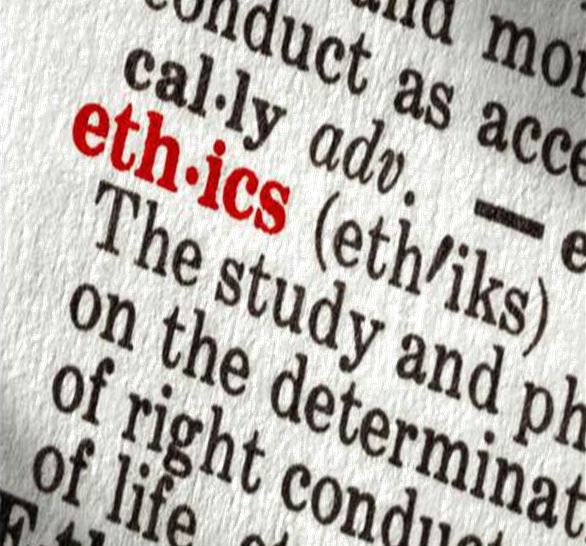 Something to Say – Ethics 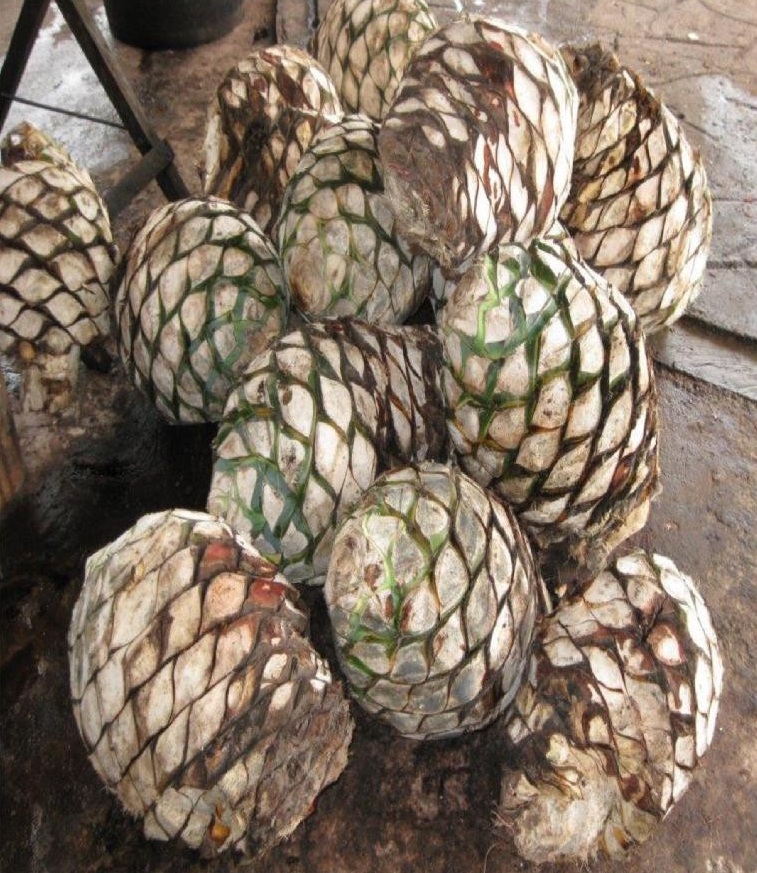