By Tommy Clarkson from the November 2014 Edition

As too many of we ‘more senior than most’ men have learned, at some point hair begins to sprout from physical locales other than those we prefer. Hence, appropriately, the name for this guy, as his trunk is hairy indeed!

It is Cuban originating and wholly delightful in appearance. The common name refers, somewhat logically, to the trunk’s beige or straw colored, stiff, long, fibrous “beard.” This makes its natural slenderness ‘about ten inches in diameter’ appear bulky, stout and, perhaps a bit fuzzy!

As the more knowledgeable would know (I didn’t until I looked it up) Crinita  is Latin for “hairy, having long locks, being long haired or having hair like qualities.” In turn, the genus name comes from the Greek word for “berry.” So, though it might cause him a bit of social discomfort, I guess we could, somewhat correctly, call this fellow a Mister Hairy Berry!

This species was “discovered” by Charles Wright on May 18, 1860. Today, very few of them are left in their natural habitat as, for a variety of uses; they were exploited for many years. The wool-like fibers were stuffed into pillows and mattresses, their leaves were made into hats and bowls and the trunks were used to build homes. As noted through one of the alternative names, the leaves have also been effectively used as thatch.

The Old Man Palm is a member of the nearly fifty who are a part of the Coccothrinax genus indigenous to “as Riffle notes” “The Caribbean Basin, Southern Florida and the Yucatán of Mexico,” which includes both clustering and solitary species. Be aware

For those who like fast, immediate results, the Coccothrinax crinita is, initially, (as described by a botanical peer) “a painfully slow grower.” Even as it matures, seeking its ultimate height of twenty to thirty feet (6-9 meters), it proceeds but moderately. Even after a decade of growth, it will probably still be less than six and a half feet (two meters) tall. The width of the crown spreads from six and half to ten feet (two to three plus meters). In turn, the trunk may attain a girth of ten inches (25 cm) in diameter if allowed to retain its fibrous covering.

There is no crownshaft in this species. It has 15 to 25 leaves per plant. They are dark and glossy on the top and silvery grey-green underside, but sometimes a stunning blue to blue green. These attractive leaves are ridged, quite stiff, round/star-shaped, and deeply separated. They are borne on short, thin petioles (leaf stalks).

These leaves are palmate and reasonably small with, as Stewart succinctly and correctly notes, “folded blades divided to about halfway into narrow pointed segments, the tips of which are usually bifid.” (Bifid, by the way, means “cleft, split or forked into two parts.”)

Its yellow, bisexual flower clusters, of around five feet (1 ½ meters), hang beneath the leaf crown. Flowers are followed by dark, purple, fruit that is round, fleshy and around one inch (3 ½ cm) in diameter.

Interestingly, it seems more cold tolerant than the other varieties in this species and may be successfully grown in zones 9b through 11 – but is not really an indoor plant.

Coming from where it does in Cuba, it is accustomed to hot, humid summers, dry, warm winters and copious cigar smoke. – The latter was inserted only to see if you were still paying attention!

Beyond that, it favors sun to partial shade and likes well draining soil with regular watering. Back on its native island it usually grew in the monsoonal grasslands (wet savannas) or, occasionally, on hilly areas. They can tolerate poor soil – but why abuse a palm pal – especially an “old man?”

As they are rather drought and salt tolerant, with protection, they can be planted near seashores. Even young plants are quite tolerant of substantive sun, but all require well-draining soil. Should you notice yellow leaves, this may be a sign of nutrient deficiency.

A quite rare miniature of this palm exists if you can find one that is suitable for growing in a pot. It is called Coccothrinax brevicrina which means ‘brief hairy’ like my rowdy, balding, best pal!

For back issues of “Roots”, gardening tips, tropical plant book reviews and videos of numerous, highly unique eco/ adventure/ nature tours, as well as memorable “Ultimate Experiences” such a Tropical Garden Brunches and Spa Services, visit us at.. www.olabrisagardens.com 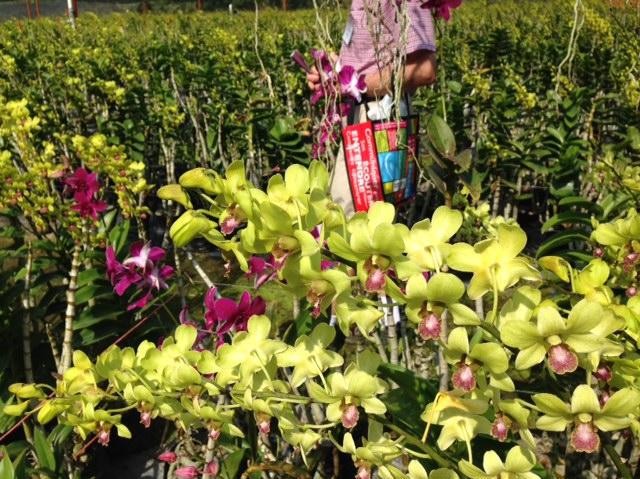