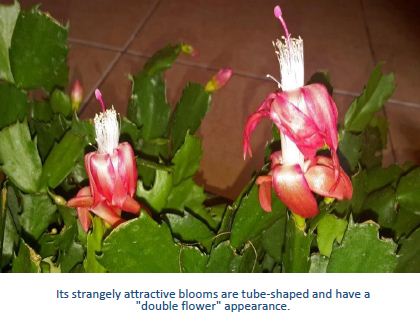 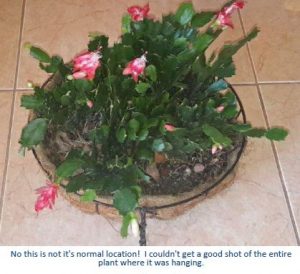 This rather interesting plant may be seen identified as Epiphyllum truncatun its original name in 1812. Then it was moved to the genus Zygocactus. However, recently it was officially transferred to the genus Schlumbergera. Don’t worry if you’ve already forgotten all of that just remember that it’s called a Christmas Cactus!

These tropical cacti that bloom around the holidays originated in the Brazilian mountains around Rio de Janeiro. It has a doppelganger (look alike) and, as a result, one has to look, very, very closely when endeavoring to identify this as Zygocactus or is that Schlumbergera truncata as opposed to the highly similar in appearance, Schlumbergera russelliana. Yet while “a rose is a rose” several of my somewhat dependable, secondary resources say that this is a Schlumbergera bridgesii. Is your mind now thoroughly muddled by what its name is and by what it might be called? Mine is and I’m the nimrod striving to research and write about it! 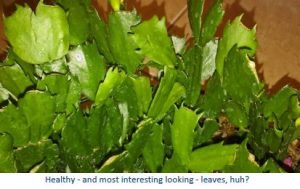 On their own, out “in the bush”, as it were (or is), Christmas cactus is an epiphyte. Accordingly, it grows naturally on tree trunks or where fallen leaves and plant debris have deteriorated in Nature’s compost pile, to make up the bulk of its soil. So when trying to domesticate one “in captivity” with a home in a pot, it should be in well-draining and aerated soil which allows its roots to breathe. (Remember that it should be repotted every three years, in spring.)

Commercially available potting or garden soil that retains a high degree of moisture will suffocate its roots, often resulting in root rot and, ultimately, your plant’s demise. The simple key to watering the Christmas Cactus is this: Keep the top one inch (2.54 cm) of soil moist at all times, but never allow the soil to become water-logged. It has dietary needs as well. Beyond regular fertilization, they like magnesium. This can be provided through a mixture of one teaspoon Epsom Salts to one gallon of water, given to your plant monthly, from early spring through early fall, two weeks after its regular fertilization.

By way of identifying at least broadly your Christmas Cactus from similar kin, first note its small, flat stem 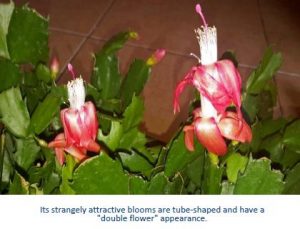 segments. These are roundish with minor serrations on both sides. They will flower from their segment ends. Perhaps the more easily  identifiable ones have neon-pink, pollen-bearing stamen which (in addition to their preference to bloom in December) is the Cactus’s primary, defining feature. Its strangely attractive blooms are tube-shaped and have a “double flower” appearance. The “outer flower” is formed by its shorter leaves that curl back near the flower’s base with the “inner flower” being formed up the flower a bit, near the stamen. (In addition to pink, there are also red and purple species.)

The key to successfully growing this plant is to remember that it is a tropical cactus and, as a result, not at all 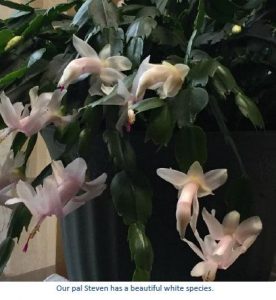 like its desert-dwelling relation. Beyond that, as with all manner of plants, light, soil, temperature and water are the primary factors affecting your Christmas Cactus. No more than an African Violet, Bat Flower Plant or a Rabbit’s Foot Calathea, it can’t just be stuck anywhere and expected to grow! The most common problems encountered are when folks place them in a location with too much heat and light and, also, don’t provide them with enough water.

Cuttings are the best manner of propagation. Simply cut off a three segment section of its stem tips, allow to dry for three or four days and then place them at least one inch (2.54 cm) deep in the earlier described soil.For the purists who just have to ensure their Christmas Cactus blooms during the Holiday season, there are several things should be done.

(1) Allow the plant a resting period from February through March. If possible, place it in a locale where the temperature is approximately 55°F (12.7°C). Also, water it less. (2) Put your Christmas Cactus in a dark room every night for twelve to four-teen hours during the fall season. (3) To ensure the best flowering results, pinch off any plant segments less than one-quarter of an inch (.64 cm) long in early September. (4) During its preflowering period, from October to November, the plant’s soil should be kept fairly dry until the flowers bud, and then resume its normal life. 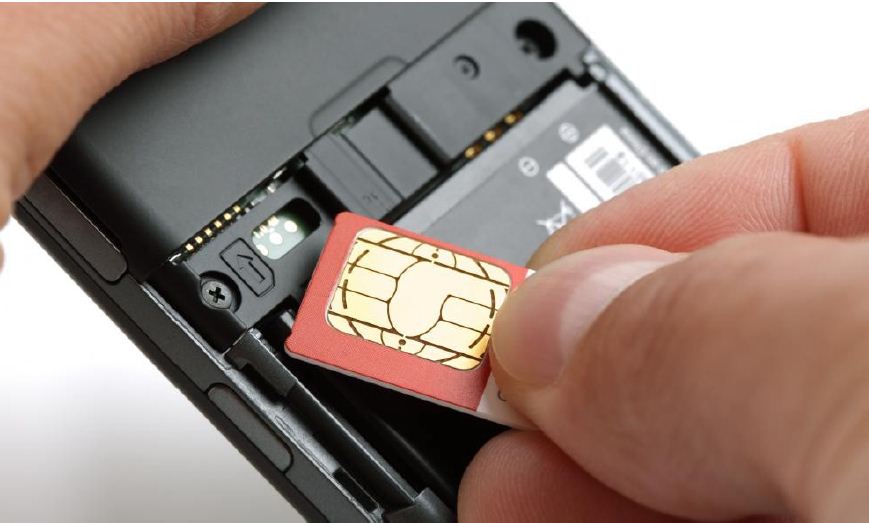