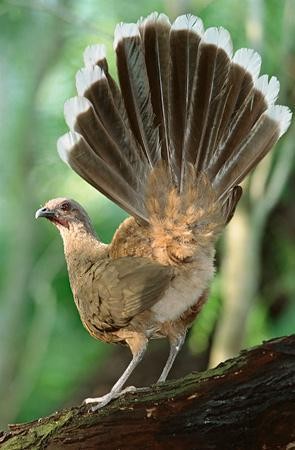 By Tommy Clarkson from the July 2013 Edition

(Note: Some may recall from previous pieces I’ve written that, a while back, I learned that much to my surprise and amazement I seem to be able to converse with certain animals. There was the startled iguana in our bathroom, the beautiful Mariposa de la Muerte (Butterfly of Death), a lisping saltwater crocodile from Santiago’s mangroves, Manfred the praying mantis who helped me in a poker game, the baby Snookum Bear (White-Nosed Coatimundi), and, of course, Herman, the Green Breasted Mango Hummingbird. Well, recently a made yet another new animal friend.)

Nearby I heard what someone had graphically described to me as the sound of a loud, unmuffled, engine – with something broken trying to start. . . then there was another, and another. I sat quiet and calm and scanning the trees, far and wide in the uninhabited, nearby trees and bushes, but sight of the “whatevers” alluded me.

Slowly not yet fully awake I turned in the darkness refilling my coffee cup and then returned to my squint-eyed peering into the early morning murkiness not yet lit by a risen sun. Suddenly, near me in the fronds of a tall coconut palm, came that repetitive, raucous rattle. Quietly, its source had flown in while my back was turned. Slowly, I leaned forward and listened.

Then, to my surprise the rather brash rattling refrain took on meaning and came to me as words!

“We’ve seen you looking for us quite a few mornings now and the guys and I decided that you seemed to be a decent sort.”

“So who are you,” I asked. Staccatolike he answered, “My name’s Charlie . . . Charlie Chachalaca. What’s yours?”

I answered, then asked, “So what sort of bird are you?

“Well, as you may have noticed, by our own choice, we’re rather secretive, hard to spot and are most “talkative” around dawn or dusk. We’re as my name says Chachalacas actually Plain Chachalacas. Some folks around here call us Mexican Tree Pheasants a somewhat prissy moniker I think,” he chattered.

“Our generic name comes from the Greek work that means “pullet” or “domestic hen” but we are far from being domesticated! Our common name, rather obviously, comes from our loud, four noted cackle that most folks unlike you 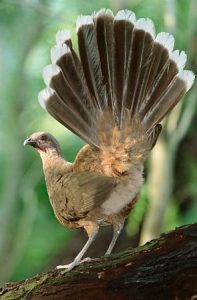 who understand us is that with which so many seem to find so fascinating. . . don’t know why, we’re just talking with each other!”

All told perched throughout our whole Chachalaca family tree (if you’ll excuse the pun) there are approximately 50 species. We range from up north in Texas through here in Mexico to southern South America. Actually, we of the

“Plain” branch of the family are the only members of the family to move as far north as the United States. And, if you will forgive me for saying so, as sentient, purportedly sensible, creatures you all are making one heck of a mess of what my ancestors told us all was once a really great locale! I certainly wish no personal umbrage but ya’ gotta’ know that, we shake our feathered heads at how you seem bent as a culture to destroy yourselves, politically, environmentally and culturally.”

“I understand Charlie and actually couldn’t agree more. That’s why we moved down here where we hope Mexico doesn’t follow Gringolandia in their mistakes,” I responded. “But, the foibles of humanity aside, tell me more about you.”

Obviously proud to be able to share such information, in a veritable machine gun torrent of words he said, “We’re not like our lame brain domesticated chicken kin, we’re, for the most part, of the arboreal sort and prefer to forage in trees. Actually, we’re rather acrobatic and can eat in some rather precarious positions – like upside down!”

“As you can see, fully grown which I am we’re about the same size as those fancified, hoity-toity, ‘better than the rest of you” relation of ours, the Ring Neck Pheasants which is to say a bit short of two feet in length, weighing in the range of 11 to 24 ounces. As to immediate family, every year my wife, Chiquita, lays two to four eggs in our what you’d call a- flimsy-appearing nest that we laboriously construct of moss and leaves on tree limb forks. Newborns take three to four weeks to hatch but once they are dry, our downy baby chicks are able to cling to branches, follow their mom and even fly short distances within a week of hatching. . . can yours do that?” he merrily cackled.

“Let’s see, what else might you like to know about us? We’re pretty much vegans in that we, prefer leaves, berries, and seeds but, while we won’t stoop to scrape in the dirt, we’ll gobble up an insect of two if we come across them. We also like cracked corn and milo that you humans give to our dim-witted, domesticated cousins,” he added with a tinge of scorn in his rather rough voice.

“Sometimes, if we’re down on the ground ”breaking bread” with our tame and dumb relation we’ll lean down and show off our long, white tipped, greenish yellow undertail feathers. They are, significantly, the brightest part of our otherwise somewhat drab olive- brown appearance which is slightly darker brown on our backs and grayish brown on our heads. Also, we’re not tight knit clusterers for, as a rule, we hang out in loose flocks of four to six.

“As you can see by me being up here high in this palm, we can fly. But we often run or hope rather than “take to wing”. Though I’m told we’re rather cool looking when we glide away from predators or other interlopers!”

“Lastly, as to our life span, one of our years is equivalent to five to eight of yours. So, if you will excuse me, I need to get on with my life and, anyway, I hear Chiquito calling.”

With that, off he flew.

And he was correct. He did look cool, after those few wing flaps, as he glides away! 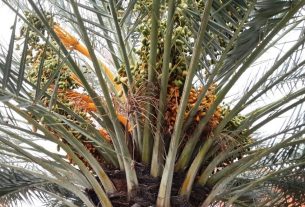 Edible Palm Fruits and Nuts – I Planted Roots in Mexico