By Dan and Lisa Goy from the October 2018 Edition

We had originally planned to drive straight to San Cristobal de las Casas from Chetumal but decided to break it up into two days. It’s always better to plan on driving less than more and not get caught in unfamiliar terrain in the dark. Hence Escárcega in Campeche was the destination at the intersection of Hwy 186 and Hwy 261. This was still a 272km (183 mile) drive from Chetumal, although the road was much straighter. The gang organized to fill up with water and dump before departure, all set up by Rafael. It took a while but, by 10:00 AM, we were off to Escárcega, led by Mike and Kelly.

The roads were in very good shape, with only a couple of potholes to dodge, really excellent pavement and plenty wide. Our journey was uneventful, passing through a couple of smaller towns in the heart of the Yucatan Peninsula. For those interested in spending more time in this region, and visiting lesserknown Mayan Ruins, there are several that can be accessed along this section of Hwy 186.

We arrived at Rancho Casado that we found in the Church’s Mexico Camping Book. Priced reasonably at $100 pesos per RV, we accessed a large field set up for dry camping, with some water and electrical access, including rudimentary showers and toilets. We were greeted by howler monkeys on our arrival and, after set-up, Kelly brought out a game not dissimilar to Apples to Apples, but for adults. This was fun, and we had lots of laughs, to add to the amusement, Bruce demonstrated an acrobatic move rarely seen when his $5 special chair collapsed. Fortunately, he was uninjured. We slept well in the jungle and were ready to go soon after first light the next morning.

The city serves as the administrative centre for the surrounding municipality of the same name. Escárcega is at the junction of Mexican Federal Highways 261 and 186, crossed by the railway that runs from Coatzacoalcos, Veracruz, to Campeche, Campeche. It is a new city that grew up in the 20th century with the arrival of the railways and roads. It is named after Francisco Escárcega, a native of Tlaxcala, who fought in the Mexican Revolution and oversaw the construction of much of the rail network in the country’s southeast. Engineer Francisco Escárcega Márquez died in 1938.

The Mexican howler monkey is primarily located between southeastern Mexico and northeastern Peru. As of 2008, this subspecies was determined to be critically endangered by the International Union for Conservation of Nature, due to the loss of its natural habitat as a result of deforestation. It is now located only in patches of forestry within these regions because loss of habitat has been so extensive. Characteristic of mantled howler monkeys, the Mexican howler monkey has a prehensile tail, a deep-set jaw with small incisors and large canines and a large vocal box to make deep howls. Mantled howler monkeys are known for forming unusually large cohorts averaging 14 members and sometimes extending to 40 members.

The Mexican howler can eat a remarkable variety of foods including leaves, flower, buds, petioles, and fruits. This subspecies of howler monkey is known to be a frugivore and a behavioural folivore. Their digestive system is slow, and they have significantly fewer enzymes for protein and fiber digestion than other frugivores, but they compensate for this by selectively eating leaves with less fiber. Consequently, much of the Mexican howler monkey’s activity is dedicated to foraging for fruit and young leaves which it can easily digest. Frugivory is typically observed in New World monkeys instead of Old World monkeys, but howler monkeys are an exception to this categorization.

The Mexican howler exhibits limited interaction with members of its species and very minor aggressive behavior. There is evidence of physical aggression between members of the species during migratory periods or changes in dominance. Males, when fighting for dominance, have been observed to target juveniles, sometimes even killing them and physically injuring older males. For a younger male to take control of a group, he must first kill the dominant male, exhibiting extensive aggression. Females also show aggression when asserting dominance, though this is usually limited to harassment behavior like hair pulling and biting. Physical fighting among group members is infrequent and generally of short duration. However, serious injuries can result. Both males and females rarely fight with each other, but physical aggression is even rarer between sexes. Group size varies by species and by location, with an approximate ratio of one male to four females.

Howler monkeys (genus Alouatta monotypic in subfamily Alouattinae) are among the largest of the New World monkeys. Fifteen species are currently recognized. Previously classified in the family Cebidae, they are now placed in the family Atelidae. These monkeys are native to South and Central American forests. Threats to howler monkeys include human predation, habitat destruction and being captured for pets or zoo animals. These monkeys are famous for their loud howls, which can travel three miles through dense rainforest.

As their name suggests, vocal communication forms an important part of their social behavior. They each have an enlarged basihyal or hyoid bone, which helps them make their loud vocalizations. Group males generally call at dawn and dusk, as well as interspersed times throughout the day. The main vocals consist of loud, deep guttural growls or “howls”.

Howler monkeys are widely considered to be the loudest land animal. According to Guinness Book of World Records, their vocalizations can be heard clearly for 3 mi (4.8 km). The function of howling is thought to relate to intergroup spacing and terri-tory protection, as well as possibly to mate-guarding. John Lloyd Stephens described the howler monkeys at the Maya ruins of Copán as “grave and solemn, almost emotionally wounded, as if officiating as the guardians of consecrated ground”. To the Mayas of the Classic period, they were the divine patrons of the artisans, especially scribes and sculptors.

They were seen as gods in some tribes, and the long, sleek tail was worshipped for its beauty. Copán, in particular, is famous for its representations of howler monkey gods.

Two howler monkey brothers play a role in the myth of the Maya Hero Twins included in the Popol Vuh, a widely feared tale of soul and passion. 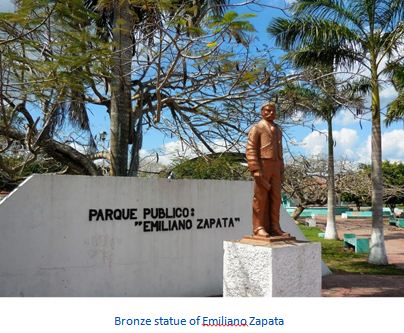