By Dan and Lisa Goy from the April 2018 Edition

Leaving Palenque about 9:00 am on February 19, we headed off to Cascadas de Agua Azul, another must-see location and popular tourist stop, this time led by Rafael and Eileen. Although the drive was relatively short, less than 70 km or 45 miles, on Hwy 199, it took us almost 2 hours to reach our destination. It reminded us of the drive to Pender Harbour on the Sunshine Coast from Halfmoon Bay onwards, lots of winding road, with many twists and turns posted at 60 km (40 miles) per hour. Add mountain villages with topes, small children selling local produce and for added drama a road block manned by mothers with infants and children. Up until that point, we had been handing out candy to the kids, which seemed to work well.

This time they held a rope across the road and were very persistent in collecting 20 pesos for produce or just collecting. Suddenly we had come to a grinding halt, with kids jumping up on the running boards and demanding some form of payment to pass, the moms were definitely encouraging these young collectors. Remember we were still deep in Zapatista terrain. Fortunately, Mexicans lined up behind the Caravan were now honking like mad and before you could say “Roberto was your Tio” they were blasting by and the rope dropped to the pavement. We transmitted to Rafael and Eileen to follow the last Mexican that goes by us and keep going, which is what we did. It was somewhat unsettling to have the children jumping off the vehicles when we were underway but what were the options?

Aside from the delays, the scenery was spectacular, mountainous and jungle all the way. We found the entrance to Cascades de Agua Azul were marked and paid a small fee to enter the ecological area. At the bottom of the road to the falls was a large grassy area and parking lot where tour buses parked and we settled onto the field with some shade. The falls at Agua Azul were equally spectacular as they made their way down the mountain slope 10 or 20 feet (3-6 m) at a time, with a boardwalk running the entire length of the falls. This included many shops selling locally produced goods and lots of choices to eat as well. 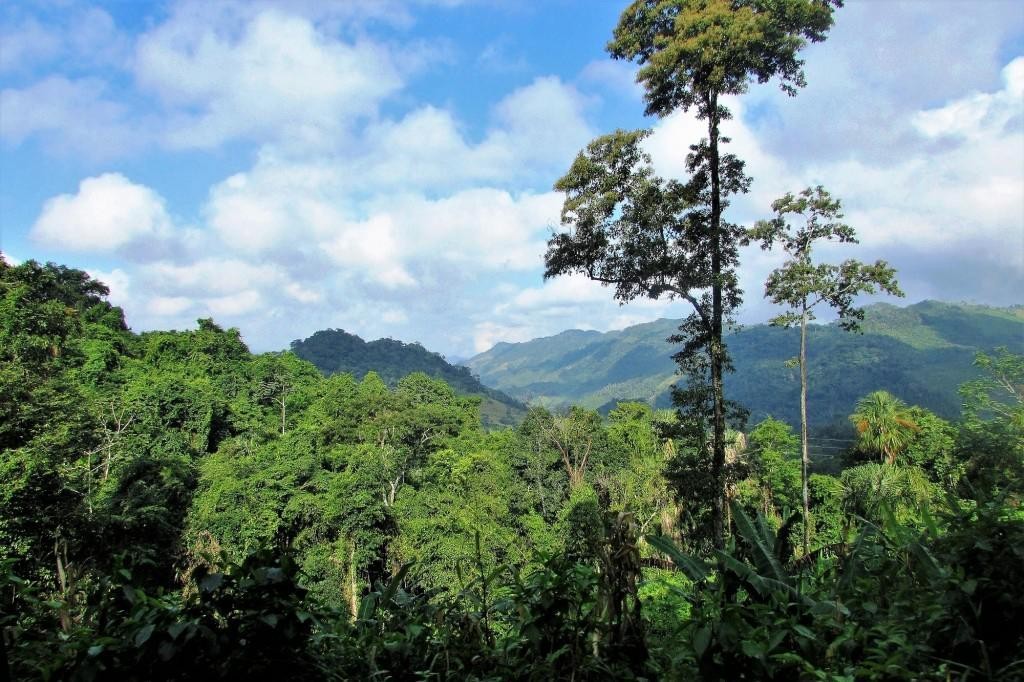 After lunch, the gals went shopping and most of the guys relaxed, soaking up the sun and enjoying a cold beverage. Lots of kids came by and we gave away the rest of our candy, they also enjoyed throwing the ball for Mike and Kelly’s dogs, Char-lie and Rosie. A local, Victor, stopped by and we had a good chat with him, I thought maybe he was 18 or 19, turns out he is 30 with 2 sons and has been married for 13 years. We met another couple from Canada, Fran and Doug, who arrived later in the afternoon and are heading to Central America.

They joined us for dinner at a local restaurant Victor recommended. Most had the fresh fish specialty. I had the breaded chicken, and dinner was delicious. We really enjoyed this stop. Sadly, after the September 2017 earthquake centered in Chiapas, it appears the water tap has been turned off at the Cascades de Agua Azul.

The Cascadas de Agua Azul (Spanish for “Blue-water Falls”) are a series of waterfalls found on the Xanil River in the Chiapas, Mexico. They are located in the Municipality of Tumbalá, 69 kilometers from Palenque, near Mexican Federal Highways 180 and 199.

These waterfalls consist of many cataracts following one after another, taken from near the top of the sequence of cascades. The larger cataracts may be as high as 6 meters (20 feet) or so. During much of the distance, the water descends in two streams, with small islands in the middle. The Agua Azul cascades, in southern Chiapas state, are famed for their bright turquoise waters and have attracted thousands of tourists each year.

The stunning blue colour that distinguishes these waterfalls is due to the limestone through which the waters pass. It is composed of various types of sediments but mainly calcium carbonate and magnesium hydroxide, both white or beige. When light travels through water, it absorbs the entire color spectrum except blue, which reaches the bottom and is reflected back to the surface, resulting in beautiful shades of turquoise.

Another interesting feature of the Cataratas de Agua Azul is that fallen trees and rocks that lean against the waterfall have a thick shell-like coating of limestone due to the water sediments. During the dry season (from December to July) the sun constantly allows one to see their characteristic colour, although the rainy season increases its spectacular flow.

On September 7th, 2017 Chiapas was badly hit by the earthquake, which struck off Mexico’s southern coast. Nearly 100 people were killed and hundreds of homes damaged or destroyed. The magnitude was estimated to be ML 8.2.

The earthquake caused some buildings in Mexico City to tremble, prompting people to evacuate. It also generated a tsunami with waves of 1.75 metres (5 ft 9 in) above tide level; and tsunami alerts were issued for surrounding areas. Mexico’s president called it the strongest earthquake recorded in the country.

Within Chiapas, an estimated 1.5 million people were affected by the earthquake, with 41,000 homes damaged. José Calzada, Minister of Agriculture, reported that at least 98 people had died in the earthquake, including 78 in Oaxaca, 16 in Chiapas and 4 in Tabasco. The Secretariat of the Interior declared a state of emergency for 122 municipalities in Chiapas, and the Mexican Army was deployed to aid in disaster relief. Schools were closed the day after the earthquake for safety inspections in 11 states. Damage in Veracruz was reported, meanwhile the state had to also prepare for the arrival of Hurricane Katia on September 9th. In addition, Hurricane Max made landfall in Guerrero state on September 14th, near the earthquake-stricken region.

Buildings in Juchitán de Zaragoza, Oaxaca, closest to the epicenter, were “reduced to rubble” according to reports from the town’s mayor. The earthquake caused buildings to shake and sway in Mexico City, while also knocking out electricity for 1.8 million people. There were reports of glass shattered at Mexico City International Airport and an under-construction highway bridge near Mexico City’s new international airport collapsed due to the shaking.

The epicenter was near Mexico’s border with Guatemala, where the quake was felt in Guatemala City, and infrastructure dam-age was reported in the nation’s southwest. President Jimmy Morales stated that one Guatemalan may have been killed.

Unfortunately, the 8.2 magnitude quake altered the course of the river at Cascadas de Agua Azul, causing the water level at the falls to drop significantly. Residents, who depend on tour-ism from the famous Agua Azul (blue water) falls, were very alarmed when the cascades gradually slowed at first. Government experts promised to investigate but local people decided to take action themselves. They used picks and shovels to restore what they could, by shifting rocks and mud. Officials believe the falls should be back to normal within a few months.

The normally turquoise water also turned brown when the flow was partially restored but it is expected that the waterfalls will eventually return to their previous state. Time will tell. We can only hope for the best.