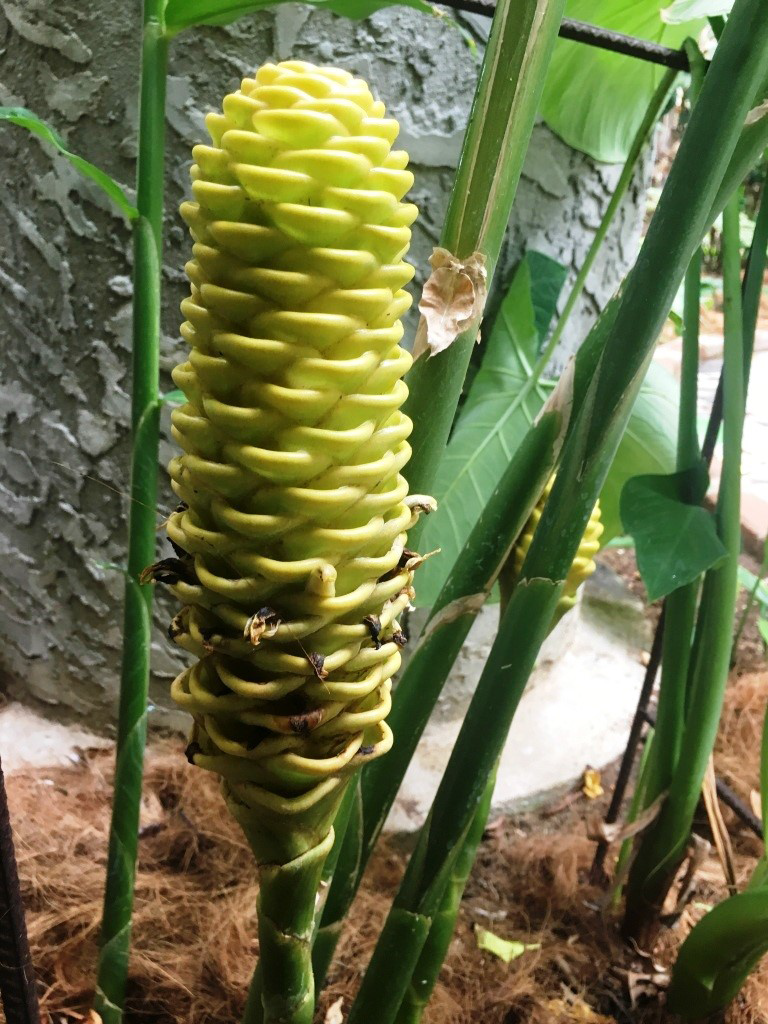 By Tommy Clarkson on the August 2019 Edition

Yes, the Ginger with which we are all most familiar is that of the commercially available and edible one, Zingiber officinale. Then there is the more conventionally seen Red Ginger (Alpina purpurata). Beyond these, many of our guests are wholly en-thralled by the brilliantly Red Torch Ginger, (Etlingera elatior). This is yet another “Oooooh and awe” sort of guy! (Both are pictured and written about in Volume II of “The Civilized Jungle.)

Botanical columnist, Jamie McIntosh, has observed that, “It’s difficult to find a more showy and unusual tropical flower than the Beehive Ginger. Depending on the variety, the cone shaped bracts are borne throughout the growing season, providing interesting material for longlasting tropical cut flower arrangements.”

Native to eastern Asia, through Indomalaysia, to northern Australia, many of the eighty species in this genus are grown in the West as an ornamental plant. This particular beauty is native to the moist, tropical lowland forests and streamsides of Malaysia where it is sometimes used as a medicinal herb. For example, water collected from the bracts of its flowers is used by the Orang Aslis of the Temuan tribe to treat conjunctivitis.

And, though untried as of yet by me, I’ve read that, culinarily, leaves and rhizomes can be used for food flavoring. Young rhizomes are sliced, soaked in vinegar and used as an appetizer and tender shoots are a salad substitute.

Its Latin genus name comes from a Sanskrit word meaning “shaped like a horn.” The species name, spectabile is derived from another Latin word meaning “visible” or “spectacular”. In turn, its common name, Beehive Ginger, is a result of the fact that its unique inflorescences resemble a skep beehive (The type used in mediaeval Europe and constructed of coils of straw or grass).

Rising from a fleshy, creeping rhizome sounds a bit like a Class B horror flick, right? Beehive Ginger needs ample growing space, rising to around ten feet tall (9.84 meters). Emerging from sheathing bases, its leaves are simple, alternate, tworanked, subsessile (having a small stalk) with narrowly elliptical blades of eight to nineteen and a half inches (20.32 – 49.53 cm) long.

Its rather remarkable flowers rise intermittently throughout the year, borne among yellowish ovate bracts (A’hhh, yet another trickster of bracts acting like flowers!) with rounded, curled tips in a dense ovoid-to-cylindrical spike of six inches to nearly a foot (15.24 – 30.48 cm) long on a leafless scape to three feet high (.91 meter). This “bloom” rises directly from the rhizome atop a scape (a separate stalk from the main plant). And here’s yet one more Nifty Nugget of Knowledge: Birds and small animals are attracted to a foamy, fragrant nectar formed in these bracts.

Propagation may be done by division. It likes moist, well-draining soils in protected, partial shade. However, they do need some sun in order to produce those great bract/flower blooms. . . .but too much sun can burn foliage, turning the edges crispy. (Like so many things in life, moderation is a good thing!) Might I suggest dappled – love that word – shade?)

Some folks with a sparsity of natural shade might consider containerizing their specimen on a screened lanai/porch or under a palapa/pergola. If after all your efforts you discern that your growing site gets more sun than desired, simply, increase watering times and amounts, never allowing them to dry out.

Beyond moist soils, Zingiber spectabile enjoy high humidity. If they are grown as container specimens, merely mist the plants. While I’ve not tried it, I have read that an alternative to this is to briefly water the patio or deck on which your potted Beehive Ginger plants are sited. This technique works best on days with durned near “beastly” heat on which an almost steamy pocket arises around the plants during the evaporation process.

Insect pests that can trouble your Beehive Ginger plants include ants, scale, aphids and mealybugs. The first of these are attract-ed by the honeydew secreted by aphids and mealybugs. Hence, should you notice ants around your plants, you may well have other insect pest problems as well. Scan along the stem and leaf petioles of your plants for signs of scale. Those sneaky aphids and mealybugs can hide under the leaves and in the bracts. Spray the entire plant with an insecticide as soon as you spot the insects possibly repeating as often as every two weeks.