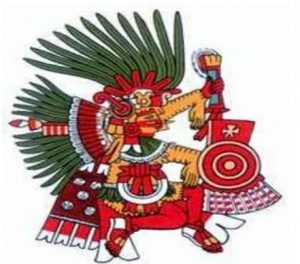 Most of the early Aztec mythology leads to the north of what was then Mexico. Many of the stories relate to happenings centered along the Gila River deep within their own time lines.

In the beginning of time the Nahua people held belief in a myth that the habitable world arose from the ooze or slime which arose from the primeval waters. This belief was common to most red men in the America’s. The Aztec gods that controlled everything at the start of the creation were Ometecutli-Omeciuatl (Lords of duality). Their names were Tonacateculti (Lord of our Flesh) and Tonacaciuatl (Lady of our Flesh). As Lord he was of the sky. Anything having to do with the earth would belong to the Lady Tonacatecuilti.

Whereas the Aztecs had their Lords of Duality, the Toltecs had their own deity dealing with the creation of everything. Their Lord of All Existence was Tloque Nahuaque. Their story of creation also runs a little more complex side. Tloque created the first man and woman and from them everything else was created. But, this “First Earth” was disseminated by the “Water-Sun.” (One could derive a connection here to the Bible’s Noah.)

During the next creation The Toltecs came into the picture and created Huehue Tlapallan to live in. It was a large town on dry land. This was swept away by the “Wind Sun.” The Quinames (Earth-Giants) were the cause of this Wind-Sun and they were destroyed by earthquakes. What bothered the Toltec people ties everything back into the north of Mexico. They believed the Quinames were from the north and would come back to haunt and bother them again.

The Aztecs believe that the first men came from a place known as Chicomoztoc (The Seven Caverns). The Casas Grandes ruins, located in the upper reaches of the Gila River valley could be the site of the ‘seven cities of Cibola.’

And, even though many have searched with one claiming he did find it in a book, the site of these cities has never been located.

Historians and archeologists firmly believe that the Aztec and Toltec civilization’s were started in the Gila River basin. The river Gila has its headwaters in the San Francisco Mountains in what is now central eastern New Mexico. As it drains away from the continental divide it flows through central Arizona. It joins the Agua Fria and the Salt Rivers in the valley of the sun and then runs just south of Phoenix. It then picks up its own valley again which still supports agriculture all the way to Yuma where it dumps into the Colorado River. There are cliff dwellings and other ruins in both New Mexico and Arizona. Some of them are extensive. The last one, as the river flows, is an Indian message board.

There are hints of a dwelling or two near it but today it’s called Painted Rock and is loaded with petro glyphs. It was a message board for the Indians passing through. It sits just below the Gila Reservoir which is the last dam on the river.

Today it doesn’t carry enough water by itself to get to Yuma so modern man, after damming it and pulling water from it all the way through its course, has augmented it by bring water from northern Arizona’s Colorado river through the Arizona’s Central Canal System. To me, it seems just a little sad that Mexico’s early, early history is wrapped up in a river valley which doesn’t have enough water even when joined with the Colorado River in Yuma, to reach the ‘Golfo de California.’

Ancient Indian lore relates to the first inhabitants in two ways. The first is from the Pima Indian culture. It tells of their beginnings belonging to a people they refer to as the ‘Ho-Ho-Kam’ nation. The problem with that is that the word: ‘Ho-Ho-Kam’ actually means, “All used up.” This is an indication that they really don’t know who their ancestor’s are.

The Navajo who like the Pimas’ are relative new comers to the region, tell of the Anasazi who were the early Pueblo people and settled in the middle 12th century. Their word

‘Ho-Ho-Kam’ simply means ancient ones. The current tribe in Yuma are called Quechan have a word for themselves which means, ‘those who descended.’

Even thought the Yuma people don’t fit into the same grouping of the Anasazi, their ancestors, and those of the rest, all work back to the Ho-Ho-Kam, Patayan and Mogollon Indians arriving in the area around 7,000 BCE. Current theories have civilization settling within the Gila River Basin until the weather started drying up. Then they started to move south again into Central and the northern part of South America.

An Experience of Mexico 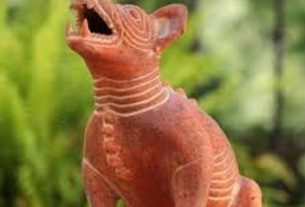