By Suzanne A. Marshall from the March 2017 Edition

We are off on a short, 4 day excursion with family, to give them a taste of the countryside and tourist 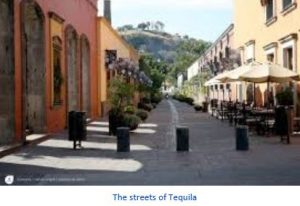 attractions that are not far away from the shores of Manzanillo.

Our destination is the town of Tequila. The countryside is absolutely beautiful through the Sierra Madre Mountains and undulating hills with row upon row of blue agave plants as far as the eye can see. We have also been told about other attractions involving the production of opal and black Abyssinian gems and jewelry from mines in the area.

With our rooms booked at a lovely small inn on the square, we all look forward to some new adventures. We 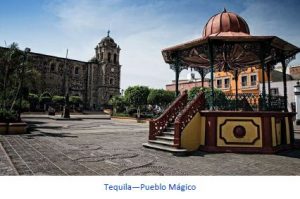 also booked a short tour of the oldest established tequila distillery named Jose Cuervo. There, we learned a great deal more about Mexico’s famous brew and did a little sipping, too.

Located in the State of Jalisco, about an hour west of Guadalajara, the town of Tequila is a wonderful touring destination. Founded in 1530 by Franciscan monks, the municipality is home to approximately 40,000 people with some 26,000 residents in the town itself.

Tequila is best known, of course, for being the birthplace of the drink that bears its name “tequila”. The drink is made from the blue agave plant, native to the area. Tequila was also named a “Pueblo Mágico” (Magical Town) in 2003 by the Federal Government and is also a World Heritage Site. 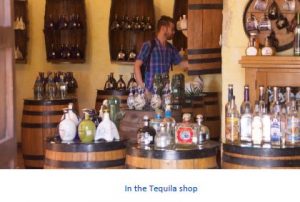 When in Mexico, who doesn’t want to check out the origins of fine tequila making and savor the subtle variances. Unlike the television or movie impressions about hard drinking characters consuming tequila, many of us become quite enthralled and delighted by learning the true character of the drink and its numerous grade levels. There are collectors of fine tequilas that compare the best of cognacs and good scotch to the delicate palate of really good tequila. Many will debate what is ‘the best of the best’. No one ever wins the debate of course as this all depends on your individual preferences.

For me, having been introduced to the taste of a wonderful tequila by our Mexican neighbors (also producers), tequila can be among the smoothest of ‘straight up’ alcoholic beverages that I’ve ever tasted. 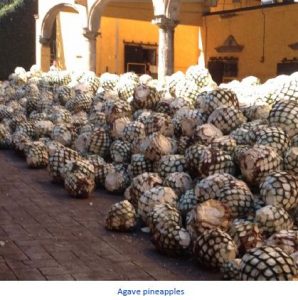 The variances are attributed to stages of the distillation process, aging and the type of wood used for holding and aging the mixtures.

Until spending more time in Mexico, I never knew that tequila is really a variety of mescal (or mezcal), made wholly or mostly from the blue agave plant. The heart of the agave plant, known as the piña (little pineapple) has been used to make sweets and fermented alcohol going back to the preHispanic period. The beverage was called mescal and was much like what is called pulque today. It was the Spanish who eventually introduced the distillation process and the first large-scale distillery was created in 1600.

From our tour we learned that the agave plants are ready for harvesting after at least eight years of growth. The heart of the agave plants (piña) actually weigh between 40 to 60 kilos. They really do resemble pineapples once they are trimmed of their spikes. But when you have the opportunity, as we did, to stand 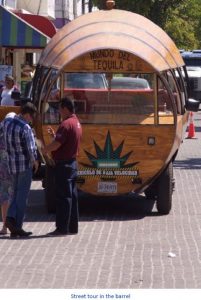 beside a mountain of them in the brewery, they are surprisingly large.

When we entered the actual cooking areas where ovens are stoked and loaded for cooking the agave hearts, we were not able to take photos. This was apparently for safety regulations due to the seepage of alcohol fumes and gases produced during the tequila distilling process.

It was interesting to note that much of the agave plant trimmings are composted for mixing back into the vast fields, thus enriching the soil. This is part of a plant rotation system that allows the soil to rest and renew itself for more agave growth in future. Other uses of the plant trimmings include making craft paper, twine, burlap type cloth and agave honey.

However the journey is not just about the making of tequila. It is also a charming town with a beautiful central square complete of course, with a fabulous cathedral (Our Lady of the Purisima Concepcion). The square itself offers lovely restaurants, gift shops and of course ‘Mercados’ full of many variations and decorative bottles of tequila. While there, you 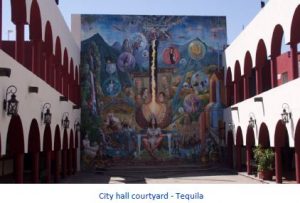 may wish to visit the National Museum of Tequila. It is dedicated to the history of tequila liquor and the only one of its kind in the world. Also take a peek in the courtyard of city hall to see a beautiful mu-ral depicting the history of the area and its people.

Having toured the distillery; viewed the cathedral; walked the shops and streets and purchased some mighty fine tequila, we found ourselves amiably exhausted. Earlier we had dined on traditional Mexican food so we headed for a little coffee shop on the square to complete the evening. As we sat and dis-cussed the day and enjoyed the ambiance of the cooling breezes, the church bells began to toll. Everyone in the square including shops, restaurants and their employees stood and bowed their heads for the daily traditional blessing of the town by the town priest. Although it took us a few minutes to react and understand the occasion, we rose to our feet and followed suit of course. I noted it was 9 PM. I couldn’t help but feel something very special about that moment and our visit to this lovely location in Mexico. We would all highly recommend it.

A Challenge Well Worth the Effort – Exercise Your Brain