By Kirby Vickery from the January 2016 Edition

Huitzilopochtli along with his ‘father’ and ‘brother,’ Quetzalcoatl (remembering the duality of most of the 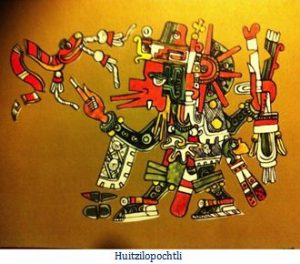 Aztec gods) were two of the most worshiped gods in Mexico, where he was associated with not only the Sun and War, but was the god of fertility and rain too.

Huitzilopochtli is a common Nahua word that means “lord” or “owner.” The title was given to the local god of nearly every city in Mexico. Because of the importance of rain to life in the tropics of the Southern part of North America, these local gods were usually associated with war and the cycle of wet and dry seasons. Huitzilopochtli developed into a single widely known god, called Lord of the Earth and Lord of the Rain and Dew. 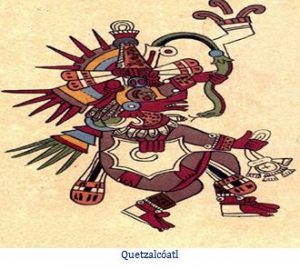 Although afraid, Huitzilopochtli could not refuse the invitation. The food served at Xipe Totec’s table was mud, the food of death, and when Huitzilopochtli ate it, he was trapped in the underworld.

Meanwhile, Huitzilopochtli’s wife and sister, the fierce goddess of love, Xōchiquetzal, traveled to the underworld. After splitting Xipe Totec with her sword, she winnowed him with her fan, burned the pieces in a fire, ground them in a mill, and planted them in the ground. These actions brought Huitzilopochtli back to life.

Later Xipe Totec was also restored to life, and the two gods again battled each other. In the end, the sun 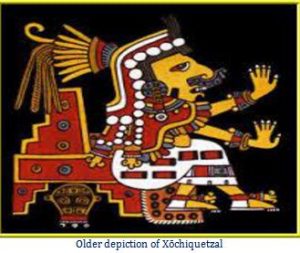 Like the story of Tezcatlipoca, this myth emphasizes the importance of rain to the land. Huitzilopochtli represents the fertility of spring rains, while Xipe Totec represents the drought of the summer months. The actions taken by Xōchiquetzal against Xipe Tote splitting, winnowing, burning, grinding, and planting are steps taken by farmers when they harvest small grains. They prepare it for use as food during the winter and sow it to create more crops the next year. By defeating the drought (Xipe Totec), the rains (Huitzilopochtli) renew the earth each year and allow life to flourish in all of Mexico.

[To the reader: If the above doesn’t seem to sit quite right in your Aztec mythology corner, then ya’ got me. I sorta made it up. Well, even that’s not right. I changed the names and locations from another culture’s mythological story, with Ian’s permission, and printed it up here as Aztec mythology. What happened was 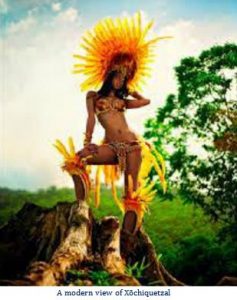 when I first started to run this in the Manzanillo Sun in 2013, I noticed a lot about their civilization and how it was held together. There was a ‘Priest Class’ and for better or worse everything hinged on the human sacrifice. It was all about blood, comma, tree and plant sap, comma, life giving water. There’s the tie in and the priests worked so hard that there is documentation that shows that Aztec people would rather be sacrificed than to die any other way. I thought this as overly bloody. But what I have discovered is that most of the different mythologies are all bloody and gory, although most didn’t go into the sacrifice that much but still got into the killing and descriptive bloodletting battles. So I borrowed one and converted it. So as to not incur the wrath of the readership I will send a whole dollar (USD) to the first person that can pin point the real mythology and major god depicted here with Ian being the judge. — Kirby Vickery, Ed.]

I was born in the dark ages!!

A little about June