By Terry Sovil from the March 2011 Edition

Blackie and Tiwi (tea-we) entered my life in February 2009 right after I moved to Manzanillo. They were the “church dogs” from the church next door to our dive shop. They had collars, were fed twice a day, had a yard but I saw them on the street. After they got to know me better if they saw me walking down the street they would give a sideways glance at each other and run to meet me. That thrilled me and I would always stop and give them attention.

We had made a “no dogs” policy when we got here. They were never allowed on the property and quickly learned where the line was. Tiwi became a favorite because she was shy and showed a real affectionate side when Blackie, the alpha, would let her.

My arms full of clean laundry they ran to meet me. I set the laundry down so I could devote both hands to their demands. Tiwi proceeded to vomit down my left leg and filled my shoe. Screaming like a little girl and running for the hose I got everything washed off and out of my shoe. Did the laundry have to go back? The laundry was still clean. The dogs were nowhere to be seen. But this isn’t the time Tiwi got sick.

The Pastor took a new church and couldn’t take the dogs with him. Tiwi and Blackie asked if they could stay with us at the dive shop. Being such good friends with “intimate moments” I couldn’t say no. Tuesday August 7, 2010 we got two used dogs. After several days adjusting to their new surroundings we all started to learn about their various problems. Tiwi wasn’t all that smart and she didn’t eat, she inhaled like a Kirby vacuum. Blackie was terrified of thunder and fireworks. We adjusted.

December came. I was still in shock at the price of dog food and wishing I could eat it too. We added “the girls” to the staff of the dive shop and put their pictures up on the website. Adding customer service value Blackie BARKS at everything and everyone that comes in the yard. With her buggy little eyes and a crooked tooth that sticks out so she looks mean. Then Tiwi got really sick.

I grew up on a farm with dogs, horses, cows and various pets but I had never seen a dog this sick. Three visits to two vets accomplished nothing. She was going to die and it seemed nothing could change that. Then a dear friend had a visitor; a practicing vet. He examined Tiwi and said it was a serious viral infection, like meningitis. I looked up Canine Distemper on the internet. Everything fit. Tiwi was indeed very sick. Two weeks earlier she was tearing around the yard and thrilling me running to meet me. Now she could hardly move.

It is the most significant and highly contagious viral disease of dogs. It targets various organ systems at the same time. It’s the same virus that causes measles in humans. It can affect dogs at any age. It is transmitted primarily by air and shed through urine and feces. In the body for 2 to 5 days it has moved to the nearest lymph node and started reproducing, rapidly spreading through the lymph system. Younger dogs are more susceptible because of undeveloped immune systems. It is difficult to diagnose because of universal and wide range symptoms. Days 6-9 it spreads to the blood then to the respiratory, gastrointestinal, urogenital and then the central nervous system. Most dogs develop an inflammation of the brain and spinal cord.

Tiwi was vomiting, no appetite, raging fever that left and returned, rapid heartbeat, lethargic, weak, depressed, muscle twitching, sensitive to pain in her hind legs, balance problems, slipped on the floor (hardening footpads), almost total loss of rear leg motor skills and briefly “weepy eyes”. Sudden death is not uncommon and we braced for the worst around Christmas. Merry Christmas.

A friend mentioned three dogs, including a puppy, with symptoms just like Tiwi’s. All died. CDV is rampant in the dog population among unvaccinated dogs. Young dogs in many countries are vaccinated as young as 6 weeks. Booster shots are given yearly. That’s what I was used too. There is no direct treatment. Blackie and Tiwi were spayed so the assumption was they had all their shots. We had no medical records or history.

All we could offer was support, hope and prayer.

Tiwi gradually began to recover. Her appetite started to return. She has begun to return to health. The vet provided seven daily shots to give her and advised on feeding and exercise. Tiwi continues to improve but neurological damage can still appear. She has a muscle twitch in her head that may never leave. The vet advised that “mutts” had a better chance of recovery.

Now she waits by the gate and actually runs to meet me. I’m thrilled.

Don’t let this happen to your most faithful friend. CDV is in Manzanillo. Immunize! 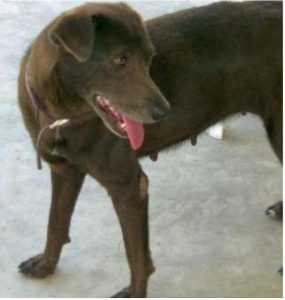