A recent article in the Calgary Sun (a widely read daily paper that one finds in almost every coffee shop in our part of Alberta) carried this headline: ‘N.E Calgary Home Shot Again.’ In the article is a comment from a neighbour, Jim McCracken, who claims this particular house has received multiple gunshots on three different occasions during the last five years. While admitting that residents are on edge, he doesn’t think moving out of the neighborhood is the answer. “It’s equally bad in other places in the city too.” He said, “So, where are you going to move to? Unless you move to the country, out of the city, it’s just a waste of time to try to move.”

It takes self-control to respond respectfully when friends or acquaintances exclaim, “You travel in Mexico – is it safe?” Or something similar, even more exasperating is the conversation that really never begins because someone exclaims, “I’ll never go to Mexico. I’m happy staying here where it’s safe.”

Well! We travel in Mexico – period. In Mexico, we utilize the same common sense concerning where and when we travel that we employ in Alberta. One should take time to put a little rational thought into the perception of safety, where safety can be found. Common sense plays a significant role, and then brings in just a sprinkling of reality; there’s really not much more to say on this subject, is there?

The consensus by those who know Mexico is that a visit to Mexico City is a must do. With that knowledge and coupled with the fact that we still had to admit “not yet” when asked if we’d ever visited, we packed a couple of bags and caught a flight from ZLO (Manzanillo) to MEX (Mexico City DF) via AeroMexico. Sixty-five minutes later on January 21st, we landed in one of the world’s largest cities. Three airlines offered service so of course price was the deciding factor with absolutely no complaints on our choice of airlines.

For city lovers, Mexico City (simply referred to as “Mexico” by Mexicans) offers enough of everything and a surplus of other things; such as great restaurants, air pollution, beautiful boulevards, traffic congestion, history and culture, crowded subway and fabulous upscale areas.

Our capable guides and friends, Hector and Malena, navigated with patience through, what to us, were hazards that would make a computer active game programmer cringe. To drive successfully and efficiently in this city means to take one’s place in a mash of cars pointing more or less within 120 degrees of the same desired direction. Then as traffic begins to move, find your slot in what appears to be a space too small for your vehicle. Hector and Malena love their home city and all it offers. The YouTube link below (while in Spanish) allows you to meet both of them and appreciate this wonderful (and somewhat famous in Mexico) couple: http://www.youtube.com/watch?v=BewQQAd5o6Q

Malena, along with more than 1000 competitors, competed in a triathlon in Manzanillo in February this year. Just one of the twelve or so events she has on her 2014 schedule. It was an experience that allowed us to better appreciate her amazing drive and witness the fraternity of truly fit people who love the sport.

As the only woman in her age group (60 to 64) she, of course, finished first. But, she also posted a better time than all the female participants in the 55 to 59 age group. Sponsored by a gym in Mexico City, her drive allows her to compete several times a year in events as far away as Austria and Australia.

Manzanillo’s Triathlon is competed on two separate levels and is held at the Grand Festival Resort, a location that offers a somewhat private and secluded venue while being close to the ocean. Triathlon events are named Sprint, Olympic, Half Iron Man and Iron Man, and all involve swimming, biking and running, but vary in distance. Manzanillo’s venue is comprised of the Sprint and Olympic distances only. The Sprint event consists of 750 meters of swimming, 20 km of biking, and 5 km of running. Malena’s participated in the Olympic version which involved 1.5 km swimming, 40 km biking, followed by 10 km of running.

Malena and Hector, are also lovers of Canada’s North and Alaska, having visited both on seven different occasions, including two winter visits to experience the Yukon Quest dog sled race ( http://www.yukonquest.com) There is no doubt that Hector and Malena know more about Canada’s north than do most Canadians. They have dipped their toes in the Arctic Ocean three times while summer traveling in simple style, staying in a tent. Needless to say, we felt privileged to enjoy their great company, their innate knowledge of Mexico and its history, and their kindness, vibrancy and enthusiasm in showing us their great city.

While training for her sporting events is a daily lifestyle for Malena, Hector, an engineer, has also accomplished much. He is the “El Padrino” of a very poor Mexican school located between Mexico City and Acapulco (meaning he and Malena support the school financially).

It was here that Hector became aware of several people who spoke the original Aztec language including a local teacher. To assist him in learning to read, write and speak this complex tongue he spent several years under the tutelage of this teacher, ultimately writing a book (encyclopaedia size) translating the Aztec (Nahuatl) language into Spanish. One can only imagine the dedication to undertake and complete such an endeavour. How about you trying to get your tongue wrapped around some of these words: Xoloitzcuintli, Guachinango and Tepezcuintle.

It was a unique and priceless opportunity having this interesting and wonderful couple as our teachers who showed us many of the historic sites in an around Mexico City, and what the area means to them.

[ed: Next month; we continue on Mark and Vicki Wright’s journey to Mexico City with their friends. This was an experience not to be missed. Why don’t you come along with us?] 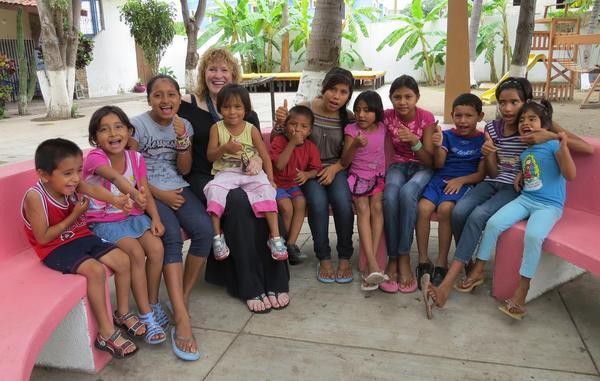