In 1956 my father took an assignment from the International Civil Aviation Organization (ICAO) to teach the pilots of Aero Mexico how to fly the air traffic control patterns required by all pilots over the United States. And with that and a brand new Studebaker President loaded with bags, baggage, and family we headed for Mexico City. I was nine and was assigned the task of watching my baby brother while he was tied in a child’s seat in the back seat most of the time. It was as a fantastic trip which has muddled down into a few remembered ‘snapshots’ brought up through the muddy mired moments of momentary memory. One such memory is that of a volcano with the outline of a laying woman. My graphic memory insists this is the second highest mountain and still active volcano, “Popocatépetl.” However, quick research proves otherwise.

There is an Aztec legend here but it includes the mountain ‘Iztaccíhuatl,’ which means ‘White Woman’ in Nahuatl. In Spanish she is referred to as the ‘Mujer Dormida’ or ‘Sleeping Woman.’ Popocatépetl is a close by active volcano which aids the ‘sleeping woman’ profile and legend by being a warrior in the mythology. You can note the similarities between this and Shakespeare’s Romeo and Juliet.

Our hero, Popocatépetl, went to war on the orders of Iztaccíhuatl’s father in order to break up their relationship. Actually he told Popocatépetl that when he returned from the war in Oaxaca they would be married. Dad figured the young man would be killed and would not return and set up a dating service for his daughter. When Iztaccíhuatl found out about this she killed herself with a dagger.

She figured that he wouldn’t survive either and didn’t want to marry anyone else. However the young man did

well in the war and did return. When he found out what had happened and that she was dead, he swooped her up and took her up to the top of a mountain hoping that the cold would awaken her. But what happened was the cold froze him to death. Huitzilopochtli the Sun God covered them with snow and turned them into mountains. The Sleeping Woman has become a tomb for Iztaccíhuatl. As far as our young hero goes, his mountain is called Popocatépetl which means Smoking Mountain and he is allowed to spit fire and lava on the earth in his blind rage over the loss of his true love.

There are as many versions of this story as there are story tellers to tell it. In this one the father is the villain while in others Dad is a really good guy. Some tell of a rival suitor bringing back news from the war that young Popocatépetl was killed. This gives reason as to why our young lady killed herself. Some even have the couple married. One Codex explains Iztaccihuatl’s name. Apparently when she was born her mother noted the ‘whiteness’ of her baby, hence the name. Others attribute the name to the amount of snow on the mountain.

Two Emperors and a President 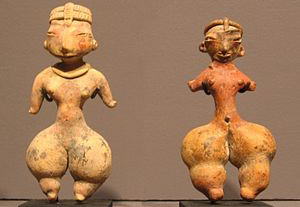