Nearly 2,500 years ago, the Greek philosopher Plato noted that “Virtue is without a master.” Around the same time, Buddha elaborated saying, “To walk safely through the maze of human life, one needs the light of wisdom and the guidance of virtue.”

Geographically north of “The Enlightened One,”

Confucius observed that, “The superior man thinks always of virtue; the common man thinks of comfort.” Whereas, a while later and a ways east of China, Leonardo da Vinci said simply, “Who sows virtue reaps honor.” But, during that period historians call the “Enlightenment,” perhaps the most germane to that which follows was stated by Charles de Montesquieu in his statement that “Virtue is necessary to a republic.”

So, cross-culturally and multiethnically, over the course of time and around the world, it has been well recognized that to be of a virtuous nature is an admirable objective. Tragically, however, one seems a bit hard pressed to apply this quality of moral excellence to much of anyone in this day and age!

In point of fact, when presented a choice, it is, sadly, the nature of humanity today to seek, seize and secure the easiest and most self-serving of alternatives. For all intents and purposes it’s a proverbial “dog eat dog,” survival of the most aggressive, “me first” world in which we now live. Gone are the days of neighbors helping neighbors, bankers extending loans based solely on a handshake or individuals doing something for another based on the fact that it was the “right thing to do.”

George Bailey in “It’s a Wonderful World” or Jefferson Smith in “Mr. Smith Goes to Washington.” Both, interestingly, played by a truly sincere, honest and compassionate individual  Jimmy Stewart.

Anymore, folks of this sort seem not only in short supply in the “real world,” and appear to have small appeal to the mindless masses who simply seek increasingly large doses of blood, carnage and special effects disasters, in their entertainment venues. “Nice,” is no longer entertaining but appears to have become passé as a reality by the hardened, cynical masses. Honor, morality and honesty seem to have been totally re-defined by our politicians and our purported media pundits – and we’ve bought what they’ve been selling!

In fact, for most of mankind (with its base of “Physiological Needs” such as breathing, eating and sleeping) the apex of Maslow’s five- leveled, hierarchy of needs, “Self-actualization,” might just as well be a round trip to Jupiter.

While the vast preponderance of the world struggles at sustained realization of Maslow’s Level One, the tiny percent of the “Haves” of humankind seem permanently locked somewhere in the initial aspects of his Level Two, “Safety” – constituting the seeking of security for body, property, health and resources.

Generally speaking today – as far as the public is concerned – it’s all about “themselves” and what they personally want, seek and demand, however it may be realized, at whatever expense to others.

(Those a bit rusty on Maslow’s theory are referred his paper of some seventy plus years ago entitled, “A Theory of Human Motivation,” as published in Psychological Review or his 1954 book, “Motivation and Personality”.)

Admittedly, this assertion is not the most complimentary of pictures of humanity. However, such conditions are actually being exponentially acerbated by – of all things – technology itself. But let’s come back to that later.

Some fervently assert that this insidious societal ailment is a result of the decline of core Judeo-Christian work ethics. Others lay blame firmly at the feet of ever increasing socialistic governmental policies aimed at meeting the demands of the growing numbers of non-contributors, at the expense of those of the laboring, tax paying ranks. Yet others point the finger at the Fourth Estate which increasingly seems more focused on making the news than reporting it.

Let’s look a bit closer at each of these claims.

Regarding the latter, as an adjunct university professor having taught International Journalism, I believe that I’ve a modicum of firsthand awareness as a basis for such assertions. These opinions have been honed and amplified through experiences in two wars and two major natural disasters throughout which I traveled alongside and personally experienced the same events, actions and activities with members of the international media.

In clear conscience I can state that with several notable exceptions by professionals such as Charlie Mitchell, Rick Jervis, Laura Ingraham, Ollie North, Ralph Peters, Lara Logan, Larry Doyle, Mike Marshall, Jonathan Finer, Mark Finkelstein, Dave Kelso and a few of my lesser known professional associates – many times the story promulgated by these purveyors of “news” had little to do with reality but was, in fact, rather dramatically skewed from truthful representation.

Where are the virtues in misleading, misrepresenting and outright lying?

So then, what of that second assertion as the “cause of our problems,” the Western World’s increasingly socialistic governmental policies? Let us recall Plato’s analogy of the “shadows on the cave wall as perceived by the chained man,” wherein reality and perception were wholly different.

Such is the hypothesis that a government providing whichever of its diverse populous demands is a good thing. Regarding this, Plato focused specifically on the conflict between public and private “good” and, suffice it to simply say, they are not one and the same.

There are no limitless public provided panaceas for private party’s problems, real or imagined. There is no virtue in demanding something from others without participation in that which is sought. One needs merely to remember the old folk tale from our youth of the Little Red Hen. The moral of the story is quite simple. Those who are not willing to contribute in the creation of a product do not deserve the end result or “if any would not work, neither should they eat.”

We all have an innate obligation to take care of ourselves. Contrary to the beliefs and actions of some, we were not born to be wards of the State. Such a basic truth should be patently self-evident. Unless markedly physically or psychologically impaired, it is not the moral duty of others to take care of us.

Should individuals choose to do so, on their own, fine. However, should such be governmentally mandated? Of course not! To “take” when able to contribute, but refusing to do so, is completely without virtue. Paine had it right, that is “Common Sense.”

What of that third allegation regarding the decline of core Judeo-Christian work ethics? A point of fact is that this value of diligence and hard work is not merely imbued in those two faiths.

None could challenge the exceptional work ethics of Aristotle, Plato and Cicero through Voltaire, Kant, David Hume, and John Locke to the likes of George Washington, Thomas Jefferson, James Madison, Ethan Allen, Benjamin Franklin, Thomas Paine and Abraham Lincoln to Charles Darwin, Albert Einstein and Stephen Hawking. All were Deists. In fact many of the middle group were primary builders of the USA.

No religion, ethnicity or culture has a corner on virtue and that is a pure and simple fact!

So, perhaps, that third assertion, as well, is not the solitary cause for “civilized” humanity’s ethical and moral decline. Perhaps the reason is an amalgam of all of these factors and more driven by one of our greatest successes, communications technology.

A case in point: Phones are no longer for merely calling home to say one might be late for dinner. They are for telling time, taking pictures, watching sports events, playing games, getting stock quotes, checking restaurant reviews, researching trivia, video recording parties and on and on. For many, this plethora of uses has become the most obsessive of addictions. According to a recent Pew Research Internet Project, “44% of cell owners have slept with their phone next to their bed because they wanted to make sure they didn’t miss any calls, text messages, or other updates during the night.” And to make it worse – what with the ease of obtaining and promulgating information – all read, heard and seen on such is all too often taken as gospel!

How easily we can be manipulated and our opinions swayed.

Who remembers “Newspeak” from the novel “1984” published by George Orwell on 1949? It was a language created to limit our concepts of individual freedoms. Now pause to, but briefly, consider how many individuals that we know who, without question, take that which is said by both members of the politico and “News Media” as absolute, correct and factual. Now that is downright scary!

Who recalls the “feelies” on Aldous Huxley’s “Brave New World” written in the 1930’s but, increasingly seeming to address our soon to be world? How far are these superficial substitutes for actual life from that now found in our video games, entertainment media and diversions easily found on our communications devices of today?

Written by Anthony Burgess and published in 1962, in “Clockwork Orange,” the freedom of individuals to make choices becomes problematic when those choices undermine the governmentally perceived stability of society. Does this sound familiar? Who or what lacks virtue here?

And lastly, what of the writings of Russian born Alisa Zinov’yevna Rosenbaum – known better as Ayn Rand – whose works ranged from “Anthem,” through “Fountainhead,” to “Atlas Shrugged.” In these she asserts that, “productive achievement” is mankind’s noblest activity and “reason” his only absolute. Both sound like solid virtues to me!

So, now, just where are we as regards to our being individuals of virtue?

Do we think for ourselves or merely ape the pap and babble of others?

Have we a personally defined, consistently applied and maintained, standards of conduct and deportment or might they wax and wane with the weather vane of public opinion?

Virtues versus vices – how do ours weigh in the totality that comprises us?

And how prepared are we to, ultimately, strive to be a better member of humanity and, who knows, possibly, ultimately aspire for “Self-actualization.” 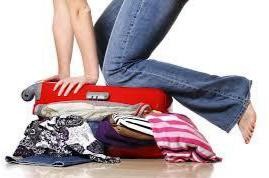 So what do I pack? What do you wear in Manzanillo?