By Tommy Clarkson from the October 2012 Edition

From when first seeing this magnificent palm up to 20-30 meters tall it has been a favorite. In fact, ours are the “children” of date palms Saddam Hussein had transported from Basrah, in Southern Iraq, to be planted around his palaces in the Baghdad area.

Thought to have originated in the northern Africa and Persian Gulf area, the delicious, yellow, red to rich, dark brown-orange, date fruit (drupe) of this palm has been a middle eastern staple food for thousands of years. In fact there is archaeological evidence of this plants cultivation in Arabia in 6,000 BC.

While this week’s column focuses on the Medjool, family wise of the hundreds (if not thousands) of different varieties there are three main cultivar groups. These are: the soft (high moisture/low sugar) Barhee, Halawy, Khadrawy, Medjool; semi-dry (low moisture/high sugar), Dayri, Deglet Noor, Zahidi/Zahedi; and dry, Thoory(low moisture/high sugar). The type of fruit depends on its glucose, fructose and sucrose content. Sadly, all varieties of the date palm are subject to terminal lethal yellowing.

Easily grown from seed, the Date Palm is dioecious separate male and female plants – but as the norm, only the females bear fruit. It takes between four to seven years before such should come to fruition (no pun intended). But beyond its many practical uses, increasingly, as a result of it striking appearance, it is being used for landscaping.

Upon the yellowing and drying up of this palm’s 20 to 30 – sometimes six meters long pinnate, blue-grey-green fronds, they can be cut, near the trunk in such a manner so as to present a beautiful diamond shaped pattern. A friend from Florida (a locale in which the Medjools thrive) many years ago, told me that the way to remember this palm’s name was to look at the strikingly attractive trunk and think of it as having “my jewels”.

Now for some culinary date trivia: The young date leaves can be cooked and eaten as a vegetable as can its bud or heart, though its removal kills the palm. Finely ground seeds can be mixed with flour to make bread. Ground date seeds can be used as a coffee supplement and even the flowers of the date palm are edible. The buds of the flowers can be used in salads or ground with dried fish as a condiment for bread. Even the tapped sap can be converted into palm sugar molasses (called jaggery or gur) to make molasses or – heaven forbid – alcoholic beverages. A case in point as regards the latter is the fact that in North Africa the tapped palm sap (known as lagbi), if left for a number of hours – depending upon the temperature – becomes a libation. The plethora of uses of this amazing palm is astounding . . . I’ll drink to that!

Highly tolerant of salt and drought, it loves direct sun, can grow in a wide variety of well-drained soils but, generally, fruits poorly in the tropics/subtropics. Though a desert plant, ours thrive and are growing outrageously fast as a result of regular, deep watering, fertilizing, and attention given them by Paco and me. (But beware its sharp spikes!) 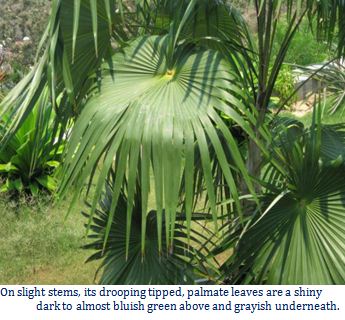