By Tommy Clarkson from the June 2016 Edition 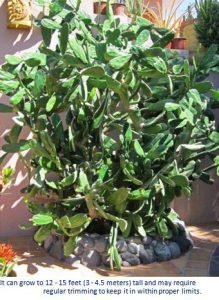 Growing originally in Mexico and Central America, early on it was called Opuntia cochinellifera but now the botanical community has bestowed its own genus name. It can grow to 12 – 15 feet (3 – 4.5 meters) tall and may require regular trimming to keep it in within proper limits. Its pads are about 8-10 inches (20-20.5 cm) in diameter and thicken with age. Eventually, the base of the Cochineal Cactus will become more round in shape like the trunk of a tree.

The genus name, Nopal means cactus in the language of the Aztecs (Incorrectly reported some places as meaning cactus in Spanish.) In turn, Cochinillifera is the Latin word for “cochineal bearing” stemming from the Greek word for red, kokinos.

That’s because the cochineal insect lives off this cactus.

And yes, a red dye is produced from their tiny, crushed, dehydrated bodies, appropriately called cochineal dye. Well, in point of fact, only the female cochineal actually provides the red dye “stock”. But no few must 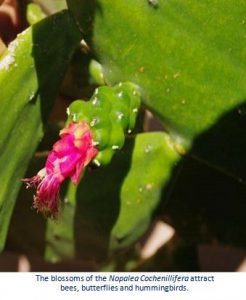 Before artificial dyes came into being, cochineal dye was the main red dye for both food and fabrics.

Recently I came across three relative bits of interesting trivia. “In the 1400s, eleven cities conquered by Montezuma each paid a yearly tribute of 2000 decorated cotton blankets and 40 bags of cochineal dye; during colonial days Mexico had a monopoly on cochineal dye with it being the country’s second largest export after silver; and, cochineal is one of the few water-soluble dyes that resists fading.”

But let’s return to the Nopalea Cochenillifera itself. Some including a botanical reference or two that I’ve read state that the Cochineeal Cactus is needle free. Wrongo! They are there, very tiny and fairly licking their proverbial prickly chops for a tender finger to puncture.

(“Glochis” is Greek for “the point of an arrow.”) If pierced by such, they might be removed by a “ blast of water”. If that doesn’t work, try duct tape or – as a last resort – hot wax.

After needle removal, both the fruit and the pads are edible. I understand that the pulp derived from the 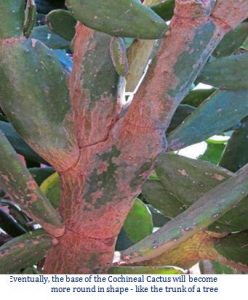 ripe, pear-shaped, deep red to purple fruit tastes like raspberries. I know of some who use the cactus fruit to make a salad dressing. (A large Cochineal Cactus can have hundreds of such fruits but just be sure to take the seeds out as they are very hard and can break your chompers.) Also, those seeds can be ground into flour.

The pads make interesting foodstuff as well. Eat them as is or, after peeling the pads, one can eat the inner part, raw or cooked as vegetables. Some folks like to leave the pad whole, make lengthwise cuts, season it, and then grill them. Also, these pads can be juiced like other green vegetables.

While the exact nutritional value has not been established, some believe it might be good for you. We know that there is scientific indication that ingestion of it can lessen low-density cholesterol, is low in calories and sodium as well as being high in fiber and vitamin C. It can help control blood sugar and purportedly through actual laboratory testing – can reduce the effects of a hangover (if eaten before drinking).

That all being said, beyond not eating the spines (well, duh!) never eat any part of this or any other any cactus that has white sap.

Now, in addition to being food stuff, the blossoms of the N. cochinillifera attract bees, butterflies and hummingbirds. For garden use, the Cochineal is well suited for planting alone or in groups. It can be effectively used in rows. Its attractive uniqueness makes it a nice addition for a bit larger rock garden. They also can be planted in large pots. Ours has its own specific location on the Transition Terrace.

They should be grown in full sun or partial shade and want their roots in fertile (but sandy), well draining soil. They’re tolerant to drought and low soil fertility, but will do much better when fertilized and irrigated at regular intervals. Should you want more, this is easily accomplished via cuttings or seeds.